The second issue of Excalibur see Betsy Braddock and co heading back to England so they can retrace past footsteps across Excalibur’s old stomping grounds. It’s not an exactly exciting return, however, because everybody’s pretty miserable and nobody seems to have their shit together.

The characters are so distracted by their own lives that they can barely seem to spend time working together as a team in this issue. Gambit’s wife Rogue is in a coma, Jubilee is worried about leaving her son back on Krakoa; and their ostensible mission – rescuing Brian Braddock from the clutches of Morgan LeFay – seems very far away right now. The only forward momentum they even have in this issue comes from a completely different team, in fact: The Marauders, who sail Betsy and her friends across to England to begin with. For their part, “Excalibur” (who admittedly aren’t called that yet) seem completely off their game, and barely functional in some cases.

Gambit, in particular, seems to be completely distracted from the job in hand, despite the fact that the job in hand could be the only thing which brings Rogue out of her coma. He spends the issue essentially mourning his wife as though she’s dead, and doesn’t seem to have the nearest thing to a plan – when they wash up ashore in England, he’s like “now what do we do?” and doesn’t seem to realise they could just move Rogue. The benefit of giving the three core members of this team a distraction each is that Howard is able to push Betsy into being the central character. We’ve seen her reinvented as Captain Britain, but the main thing that pushes Betsy up is the way she stays on mission when other seasoned heroes are faltering.

With Gambit an emotional wreck, you see the contrast between his reaction to a nominal loss and Betsy’s similar reaction. She is the one who takes the lead whenever things get desperate – she is the one to suggest carrying Rogue, she is the one who distracts an attacking swarm of selkies away from her friends, and she is the one who keeps reminding them why they’re there. The smart move from Howard is that she doesn’t allow that to be the only trait for her lead character – if Betsy were right all the time, and heroic all the time, then there’s little point to her. She could be any caped character. Instead, Howard uses Betsy as the audience surrogate, establishing that it’s understandable how annoying Jubilee and Gambit are here. 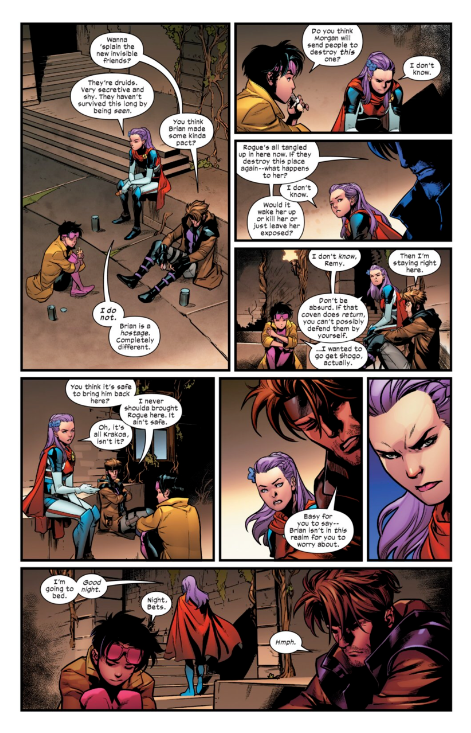 There’s a crucial little scene where the characters head to the old Excalibur lighthouse to rest up for the night, and Betsy has to listen to her two non-comatose friends whine for an extended amount of time. Her response isn’t to gee them up and get them back in the game – she instead storms off and leaves them to it. That provides Jubilee with enough lack-of-passion to sneak back to Krakoa to find her son Shogo, and that’s ultimately the hubris which catches everybody out at the end of the issue when Shogo, um, transforms into a dragon. It’s not the grating defeatism of Jubilee or Gambit which undoes the team here: it’s Betsy’s leadership. She’s taking the lead, but she’s not doing so in an inspiring way, and that allows her friends to wallow in self-pity and – essentially – self-defeat.

That choice in Howard’s script gives Betsy a little more life than if she was just a cool hero. When Gambit chafes at Shogo being brought to the lighthouse, Betsy again jumps off to go be a leader… but she doesn’t stop to check in with Gambit and Jubilee first, to squash their argument. She races off into a fight, unaware of what her team are doing, and their choices are fairly telling of her leadership. Gambit rushes into the fight aggressively, but Jubilee runs back to take Shogo back to Krakoa once more. Betsy’s inability to empathise with her teammates in this moment splits them up, which is why Apocalypse has to show up at the end.

Apocalypse’s part in this issue reinforces the point that these characters are in danger. The first page shows some of his first followers, centuries ago, as they head out to see but drown on the journey. Apocalypse doesn’t help them, and it’s pointed out that although these were smart, well-prepared individuals, their own failings led them to their deaths. That’s clearly meant to be connected to our heroes, who similarly are all long-tenured and equipped characters: but if they do trip over their own feet on the way, Apocalypse isn’t going to help them back up. That uncertainty provides more excitement to an issue which is, to be fair, struggling a little to provide something hugely compelling for readers.

We have Betsy Braddock’s latest rehabilitation as the centre-stage attraction of the series, but to do that the creative team are purposely pushing Gambit, Rogue, Brian Braddock and Jubilee off to one side. With the heroes diminished in favour of the plot, Apocalypse stands out as the unpredictable element in the story. Betsy is off on her heroes’ quest, but Apocalypse’s role is the one to provide the intrigue. He’s the only one with no distraction: his aim is true.