Within the X-Men series, X-Force has become known for the being “the paramilitary one”. Far from the original series where the X-Men pretended to be semi-mercenaries in order to keep the public imagine up, the current view on X-Force tends to be that they are basically mercenaries now. Rather than carrying guns specifically so the American public can now make more sense of them, they carry them around because they’re part of a private military working solely for mutant causes. And their presence on Krakoa suggests two worrying things.

The first is that the X-Men franchise needs to always have a proactively aggressive section of mutantkind at all times. Despite the X-Men being mutants with powers, it’s always a gun which is prominent on the cover, isn’t it? From way back when and Liefeld’s tenure with the characters, it became second-nature of characters to hold guns, as we entered a world of Cable, Domino, Deadpool and more, who acted as a de-facto military unit taking orders from their military leader. It’s fascinating that the 90s led to writers deciding they couldn’t understand the mutant metaphor anymore if they just existed as a society: they needed to be revolutionary; they needed to take up arms against their oppressors.

Strangely though, this new group of X-Force characters are a more passive set than ever before, at least on the surface. Domino has always used her powers to bolster the guns she carries around at all times, but here we have Sage, Quentin Quire, Colossus, Beast and flippin’ Jean Grey all in the team – none of whom skew towards the aggressive, mercenary aspects of the team as in the past. There’s no Warpath holding knives; no Cable clutching an oversized gun – the only nod to the most weaponised X-Force of yore are Domino and Wolverine, who stands claws-out as always.

It seems to suggest that the conceit here is that the weaponised X-Men will be the smart ones, who’ll over time have to prove to the other mutants with more passive powers that force is necessary. There’s a telling conversation early on in this issue where Beast is wandering around his safe island haven, tracking the wonders of nature and having a scientifically wonderful time. He’s so bedazzled by everything around him that he’s caught off-guard by a predator, who is promptly seen off by Wolverine. Logan tells Beast off for being so off-guard; Beast tells Logan off for instinctively going in for the kill. Those two ideals play out through the rest of the issue as our throughline. 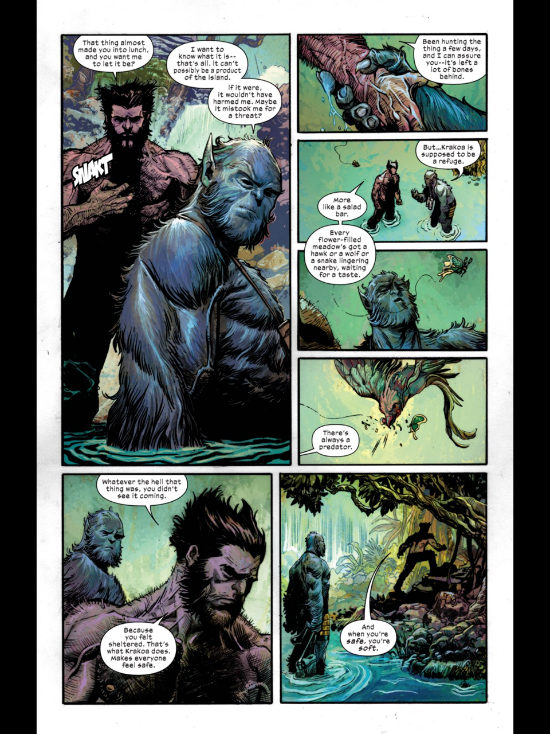 Either Beast is a dreamer, or Wolverine is a cynic. Given how the issue ends with Xavier being murdered – the dream literally dying because mutants aren’t expecting the attack – there’s the implicit suggestion that we’re meant to realise Wolverine is right. And if Wolverine is right, it means that mutantkind have to weaponise themselves if they want to survive. It’s not enough to isolate themselves from the rest of the world – the rest of the world will seek them out and gun them down if they can. Nowhere is safe from a defensive position, and so they will have to go on the attack if they want to survive. That’s more Magneto than Xavier, but Magneto has essentially dropped that side of his leadership in order to form a coalition with Xavier and Apocalypse right now. Which leaves Wolverine as “voice of reason”.

You can view this whole thing a number of ways, and perhaps the smartest thing about X-Force as a sub-franchise is how different people can view it differently. On one hand, it turns the X-Men into a revenge fantasy, where any action is treated with an equal reaction. Somebody evil murders a mutant? The X-Men murder that person right back, and thus the balance is restored. It turns racism and prejudice into something which can be satisfyingly punched in the face and stabbed so it can’t come back, which is simplistic if somewhat pleasing. On the other hand, there’s no end of stories where the stand-in group for minorities are attacked and attacked and then pull their punch right at the end. Why do minorities always get told that they have to be “better” than the people who are murdering them at every turn? Isn’t it a neat reversal to finally see the minorities get to honestly just get revenge for the persecution they’re constantly receiving?

This issue, as tends to be the case, hovers the question without ever answering it – because leaning one way or the other will take out half the reading audience. But as a writer Ben Percy tends to like to be definitive rather than vague, so we’ll have to see how things change moving forward.

Of course, there’s a second way we can view the whole of this series, as presented here: that the new status quo for the X-Men is just a shiny new distraction from the stuff that really matters. All the characters who try to intervene in the attack on Krakoa are caught off-guard in some way. Xavier says that no mutant will ever be a threat to them again, only to be shot by humans who have grafted parts of Domino’s mutant skin into their own. Tom Cassidy is distracted in turn by Xavier; and Wolverine is distracted, most interestingly, by the predator he’s just killed. It seems implied here that Wolverine tracked down the creature which attacked Beast and killed it – before cooking it. He’s eating it when the attackers show up.

When Wolverine shows up to take out the assassins, he’s shot down before he can do anything. It’s Beast, instead, who jumps in for the… kill? Weird choice for Beast to kill someone in cold blood. But that seems to be the point. X-Force has always been a series about the need for rage and fury and retribution: the reason why we have so many passively-powered mutants is so they can realise, one by one, that they need to pick up a weapon and fight back. As even Jean Grey says for some reason “It’s time to be smart and swift and violent”.

I’m not sure I like that. We’ll have to see if it’s the case as the series continues.