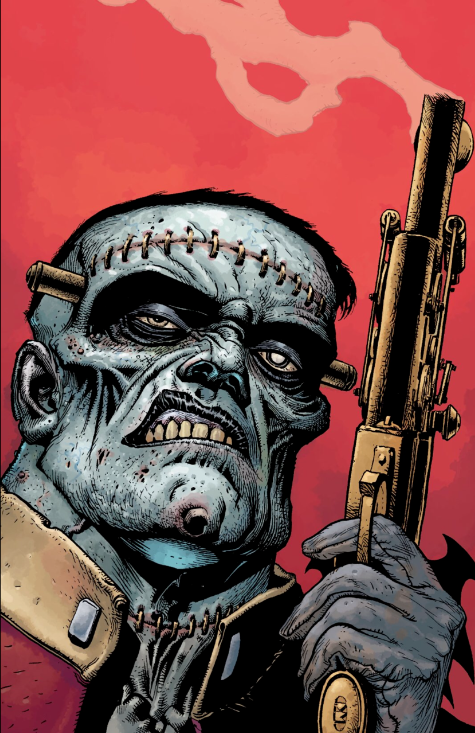 “First over the horizon comes fear. And at its heels, terror.”

The second issue of Frankenstein — a Morrison/Mahnke/Kalisz/Balsman joint named “Red Zombies” — opens on Mars, again setting Frankenstein in a world where he doesn’t belong. Frankenstein is on Mars, the home of the Martian Manhunter and John Carter. This issue is a bit of space horror akin to Alien, with nasty, organic structures and creepy, unfamiliar creatures that almost hold familiar shapes and uses. Frankenstein is on Mars to do what he does best: leave blood on the sand.

He’s on the trail of Melmoth, the villain briefly glimpsed in the first chapter and fleshed out elsewhere in Seven Soldiers. Here, Melmoth survived an attack deep underground and is pictured with his face wrapped in bandages, like a cut-rate invisible man getup. He’s accompanied by an old-school mobster, and they’re utilizing enslaved children from Earth to locate an object of power in a mausoleum on Mars. Melmoth casually explains his origin, hinting at the truth fully revealed later in the series: he’s from the end of time, and his cruel ex-wife dropped him into the distant past as punishment. He says he wants to destroy her and save humanity, but can you really trust someone who believes the ends justify the means?

Frankenstein slings a pickaxe into Melmoth’s back as a way of saying hello, and then gets down to his usual gruesome business. There’s no mercy for the wicked, as Melmoth is sentenced to spending his near future as excrement and a child-abusing gangster finds that there are some things you can’t talk your way out of, no matter how hard you try.

Mars is a great setting for Mahnke and Kalisz to do their work in. Mahnke excels at the grotesque, and he brings it in spades here. Kalisz drenches the book in reds, evoking not only blood but the red skies of DC’s various crises. Mars looks mid-apocalyptic, like it’s been on the cusp of the end for millennia. I said that the architecture is organic earlier, but that’s underselling it. The structures look like husks, the cast-off flesh of dead bugs that turned to stone in the harsh Martian atmosphere. The copper-y reds give everything an unreal feeling, a suggestion that there was once life here, but it died a permanent death ages ago. Mars is creepy. Frankenstein is breathing in the dust of a long-dead civilization.

This chapter is one of those sci-fi stories that feels more like fantasy than science fiction, thanks to the prose in the caption boxes that float over images of Frankenstein riding a blue-fire-breathing, flesh-eating bug-horse over the ancient plains of Mars. I imagine it’s the old line about any sufficiently advanced — or ancient, in this case — science being indistinguishable from magic. Morrison leans hard into the purple prose, really working similar muscles as Robert E. Howard’s, with lines like, “Even Frankenstein, unliving, unkillable, shudders in this desecrated planetary mausoleum, its dusty secrets ransacked after undisturbed millenia.”

Mars is old and dead and gone. So old and so dead that even Frankenstein, a creature well-acquainted with death, must pause and settle his spirit before continuing. This is death on a planetary scale. Putting men in graves a dozen at a time simply cannot compare.

It’s not hard to see the state of Mars as a parallel to what the Sheeda want to do to Earth. It was once bountiful and populated by complex civilizations of sentient beings, with its original civilization being described as amphibious and featuring “toad emperors.” They’re less than dust now, and while it’s unclear exactly what led to their fall, it’s obvious that Earth is headed for the same fate if the Sheeda manage to complete their horrible plan.

Melmoth claims to be working against the Sheeda, fighting to save the Earth in his own special way. He spills the beans on his own origin and why he’s working to fight the Sheeda to his mobster friend, but he also reveals something about Frankenstein once it becomes obvious that Frankenstein will thoroughly wreck those plans if given a chance.

Frankenstein’s a Grundy, a creature bred to be a slave and easy to control if you have the right key. When the doctor wanted to create his monster, he used a bit of Melmoth’s blood to give it life. This is Frankenstein’s weakness, his kryptonite — in the right situation, he is compelled to obey another. Here, the impulse almost costs him his freedom. Later… well, what could possibly go wrong?

The first issue was fairly standalone, in that it shared a villain with the others and not much else, but the second is where the meta-story of the Seven Soldiers of Victory project begins filtering into the series. There are references to an Erdel Gate, named after the man who brought the Martian Manhunter to Earth, the son of Tony Silencio from Seven Soldiers: Klarion is a business partner of Melmoth’s, Melmoth explains exactly what the Sheeda plan to do to the Earth, and Billy Beezer, a young kid also from Klarion, is the one who frees Frankenstein from being subservient to his most hated enemy forever. 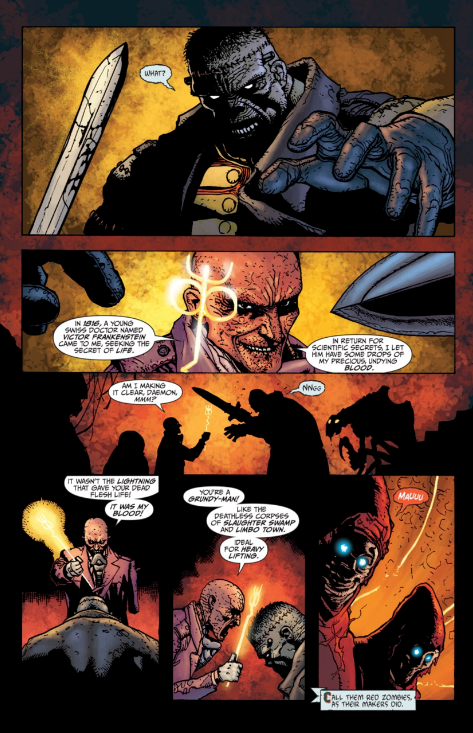 As far as the meta-story goes, Frankenstein is most closely connected with Klarion thus far. Klarion’s people use Grundy-men as labor, and the men of Klarion’s village turn to Grundy-men after they die, a perfect circle. But Frankenstein is kind of the Blade of Grundy-men — all of the strength, power, and energy, but none of the decreased mental faculties and inherently servile nature. He’s a zombie with free will and incredible strength, but at his heart, he’s still a zombie.

Klarion’s people are descendents of Melmoth, as well. There’s something about Melmoth’s blood that alters mankind, that makes them easy to subjugate, but also grants them super-human capabilities. In Frankenstein, Melmoth’s blood created an infinite engine of a heart and undying rage. Melmoth’s own duplicity leads directly to his incapacitation again and again as his plans are repeatedly and separately foiled by Klarion, by Frankenstein, and by his ex-wife.

The meta-story has seven characters swirling around each other, never meeting but affecting each other’s lives in varying ways. Some characters are playful, others lost in their own heads, and still others are struggling to understand the situation they’ve found themselves in. Frankenstein may be the most pure, the most direct, out of all of them. What is Frankenstein? Frankenstein is the death of evil.

His motivation doesn’t change, nor do his methods. He smashes evil and he accepts what comes with that, be it damnation or being buried alive (buried undead?) for one hundred years. Mister Miracle is tossed about like he’s in a hurricane, Zatanna questions her place in everything, and Klarion is a trickster from below, but Frankenstein is Frankenstein.

You can see it in how Frankenstein interacts with everything that is not Frankenstein in the series. Frankenstein only rests when he believes that he’s defeated Melmoth in the first issue. Melmoth briefly gets the upper hand when he activates Frankenstein’s Grundy nature. But in general? Frankenstein acts upon everything else, rather than being acted upon. He’s a knife making its way through butter. He may be slightly altered as time goes on, but his nature never changes. As long as Frankenstein lives, evil dies. That’s it.

If you trust Melmoth’s words, it’s clear that Frankenstein could’ve been the first of a wave of creatures like him, possessed of unnatural strength and supernatural fury and sent out in the service of whoever was craven enough to command an undying army. After all, Klarion’s people have put Grundy-men to great use. What’s the next iteration? But the tragedy of Frankenstein is that he is unique and alone in the world, the first and the last of his kind… isn’t he?

Mahnke and Kalisz absolutely kill the final page of this issue with a splash of Frankenstein striding directly toward the camera, his chest broad and muscles popping. “And thus damned,” reads the caption, “he leads the damned back home.” Damnation sends a chill through Frankenstein’s bones, but doesn’t stop his mission. He accepts the consequences, whatever they are, and keeps moving.

David Brothers is fate’s cold breath upon your shoulder. You can find a listing of all his work past and present over on his site here, and follow him on Twitter here!