Welcome to Spider-Man Roulette! Shelfdust’s Patreon backers were asked to pick a number at random – and now I’m going to write about whichever corresponding issue of “Amazing Spider-Man” they chose! This issue was picked by Patreon backer Samantha Puc, who chose number 77 for the roulette! 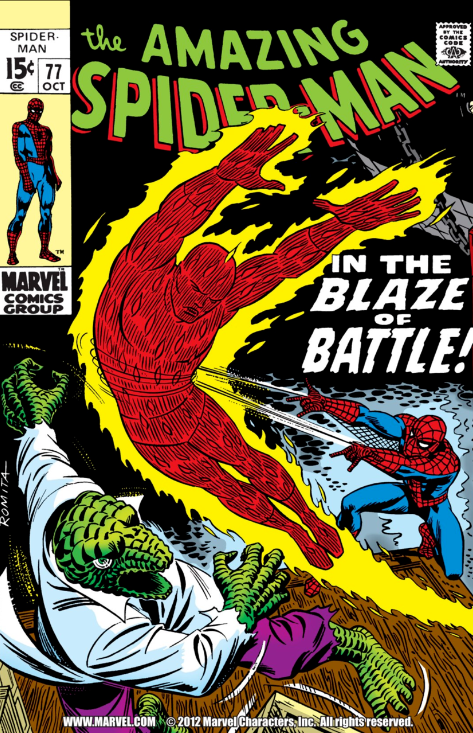 In Amazing Spider-Man #77, our heroic wallcrawler is up against the Lizard, who has once again gone rogue across the city. Spidey’s goal is essentially to humanely capture Lizard and turn him back to human form, but his simple mission is complicated by the appearance of a second hero on the scene – Johnny Storm, the Human Torch. Because Johnny is there as well (and because at this point in time Johnny and Peter don’t know each other and therefore can’t trust each other), Spider-Man’s tactics have to change. Before he was looking to catch-and-release the villain, so everybody goes home safe to their families: but now he has to also make sure that the headstrong torch doesn’t outright kill Connors. Torch, on the other hand, sees Spider-Man apparently play fighting with a monster, and doesn’t understand why he isn’t trying to seriously stop the villain – so he makes the assumption that Spider-Man is helping Lizard for some reason, and turns on both hero and villain alike. It’s a case of mixed-up misunderstandings, in classic sitcom style… only with the happiness of a family on the line.

Early Spider-Man stories (if you can say that for the seventy-seventh issue of a series) have an advantage over modern-day issues in that nobody really knows one another yet, so each dynamic has yet to be built or established fully. Nowadays Spider-Man and Johnny Storm are best friends and former roommates, but right back at this point in time they look at each other with nothing but suspicion. Johnny isn’t in the wrong to act the way he does, given the information he’s presented, but Peter isn’t wrong to withhold information from this hero he barely knows. even if he is part of the most famous family in New York. If they knew each other better then this whole situation would resolve itself in an instant and Johnny would be able to let Peter go about his mission without getting involved – but Spider-Man is hated by the city, attacked in the press, and somebody Johnny can’t trust to just get on with things. It’s part-and-parcel of his heroic identity at this point, and it’s precisely why this issue works despite the stretched misunderstanding which keeps the story going.

It works because there’s a certain logic in Spider-Man being the one hero in New York who is hated – because he’s one of the only superheroes with a secret identity. The X-Men don’t wear masks, the Fantastic Four are well-known philanthropists, and most of the Avengers are clear and visible at all times. Of the heroes who do wear a mask in battle, Captain America and Iron Man both have public personas and are well known – despite not being visible, everybody on the street knows who is in the costume. Even mass murdering characters like Punisher or Wolverine walk about in broad daylight with their faces shown, so it’s all the more unsettling when you do have “heroes” flying across the rooftops without any detail known about who they are and what they want. Daredevil and Spider-Man are the two heroes who should be treated with unending suspicion not only by the general public but by the other heroes of the city. They’re uncanny and unknown.

Spider-Man especially, as he is a highly visible hero – swinging through the streets, constantly in the papers, and adopting a spiderlike gait as he crawls across buildings. He could show up anywhere, at any time. The reaction your co-worker has when they see a spider crawling across their desk? That’s the feeling that should pervade New York at all times. You could be fixing your aerial; you could be on a lunch break; you could be anywhere in the city and suddenly he appears out of nowhere, face covered and on some unknowable mission. If you’re a part of the general populace in New York, Spider-Man should be scary – and if you’re a hero, he should be someone you’re wary of.

Johnny’s scepticism of Spider-Man’s good nature is the driving force of the issue. Lizard is accepted as being a “beatable” threat, in the sense that either of them could single-handedly defeat the villain with relative ease. It’s their clashes between one another than gives Lizard even a chance here, and he’s smart enough to take that and use it to his advantage, cheap-shotting one when they’re distracted by the other. For Spider-Man, he’s dealing with a hero who is trying to do the right thing – but Johnny here has no idea what to expect from Spider-Man. Johnny’s hyper-vigilantism is strange, for sure, but from his point of view he’s the only one on the rooftop suggesting that the monster should go to jail. That belief is some of that good ol’ fashioned black-and-white morality which has followed the character for years (he’s always depicted as being the most straightforward member of the Fantastic Four whenever he shows up in any new media) and it speaks to his life lived as a public hero.

Spider-Man, on the other hand, has lived his life as a public menace, and so he can see why Curt Connors/The Lizard needs to be helped, rather than thrown into jail. Curt is also in a secret identity here, where only his family know that he’s also the Lizard – and it’s arguable that he himself doesn’t currently know, because when the Lizard takes over there’s no sign of Curt behind the eyes. Once he’s defeated and turns back, he remembers everything, but at the time he’s an apparent innocent, trapped inside an identity everybody hates. That’s something Spider-Man can empathise with, and his ability to see the different shades within this picture gives him a better sight than somebody like Johnny Storm, who is in it for a good fight and a heroic victory. Spider-Man just wants to help Curt make it through one more day.

In the end, Peter has to turn to outright tricking Johnny into leaving, pretending that he’s just used his secret underwater hearing powers to hear the Fantastic Four signal go up. Johnny races off, Spider-Man can finish his mission, and everybody goes home safe. But it’s again at the cost of Peter’s own safety – he’s just lied to one of the Fantastic Four, and there’s no doubt that’ll cause him some troubles somewhere down the line.

2 thoughts on “Amazing Spider-Man #77: Get Out The Way, Johnny Storm”