Last issue, we were reintroduced to Shiloh Norman, a side character from the latter half of the original Mister Miracle series who hadn’t been seen much since. Now grown and having taken on the mantle of Mister Miracle: Internationally Famous Escape Artist once held by the MIA Scott Free, Shiloh is here thrown in the middle of a lot of New Gods drama that neither he nor we will fully understand until well after this series ends. In a story which runs pretty parallel to that of Neo from The Matrix, Shiloh tries to understand who in his life is manipulating him in order to unlock the greater mystery of the New Gods. To which we say… good luck.

Seven Soldiers was published in 2006, around the time of Infinite Crisis and the initially slow deconstruction of much of Crisis on Infinite Earths and Zero Hour’s established retcons, all heading into Final Crisis in 2008 and from there to the next company-wide reboot of New-52 in 2011. Not quite there yet though, this is a series that is wholly dependent on continuity that is… unclear at best. Last issue, a two-page spread told us that there was a war in Heaven, and evil won, but that doesn’t explain much of what’s happening here in Mister Miracle #2.

The issue begins with Shiloh caught in what is referred to as “the Drive-By Derby”. Metron and the Black Racer sit nearby, arguing about whether or not he will succeed in whatever this vague task is which has been given him – this general Morrison penned New Gods plot more or less began in “Rock of Ages” back in JLA and doesn’t really get resolved until the end of Final Crisis a couple years down the road. In the meantime, Shiloh fights for his life. He escapes only to run into group of New Gods now “condemned” to life as houseless people. They’re immediately hostile to Shiloh and shoo him off when he attempts to question them.

Shiloh then goes to see his clearly evil therapist, Doctor Dezard, and for long-time Fourth World readers, the therapist is obviously the villainous minion of Darkseid, Desaad. The doctor further confuses Shiloh with loosely assembled pseudo-psychological doublespeak that no one in their right mind would fall for, then rushes him out of his office. The issue closes out as Desaad then contacts a disguised Darkseid, informing him that now would be a great time to move in and take Mister Miracle out, permanently. 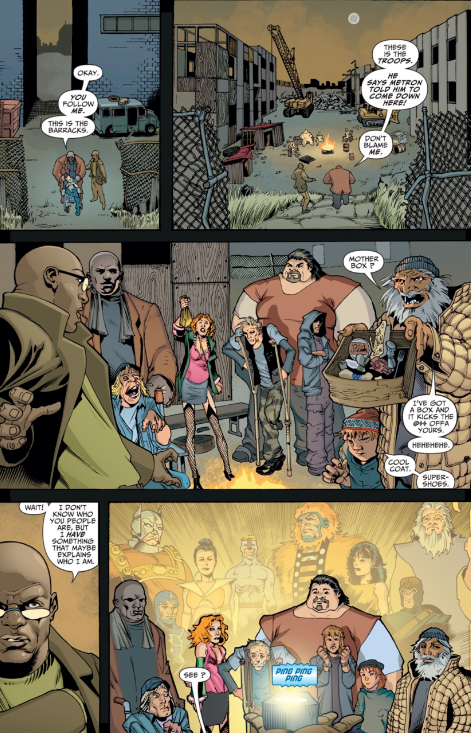 The problems of the last issue continue here. Indeed, the biggest failing with Mister Miracle as a series is that nothing that happens in it has anything to do with Shiloh. This whole story is so clearly a means to an end for a larger story being told that it never establishes its center in the way that the other Seven Soldiers series do. Not only does Shiloh bear the brunt of being a legacy hero based on someone who himself was a mostly obscure character at the time of the series release: his persona is not fleshed out at all. We barely learn anything about his development; how he became Mister Miracle; what he planned on doing with his life; what makes him happy; anything.

The backdrop of New Godsian excess is interesting but even that isn’t fully fleshed out in this series. Morrison uses this stuff to great effect often enough, but here it’s just a confusing muddle of plot threads that never really tie together. Last issue began with our lead being thrown into a black hole and managing to escape only after Metron took control of the narrative and lectured him for a couple pages. In contrast, this issue begins with Metron and Black Racer arguing over Shiloh’s destiny while Shiloh himself tries to avoid being killed in the derby. Metron and the Black Racer are playing chess

It’s an overly a literal metaphor that is beyond heavy-handed and sets the tone for this mostly phoned-in issue. The therapist could be spotted as the villain from the first moment he appeared on the panel, which leaves us with a connect-the-dots story that doesn’t break new ground despite being poised for it. It’s all the more notable as an outlier as Mister Miracle is flanked by other series that establish themselves as strong individual stories.

There’s also lot of awkward stuff in here in relation to culture. The fact that they’re engaged in a “drive-by derby” where the Black Racer actually states “Death is the drive-by that doesn’t end. The long black Sedan. The sound of the bone beatbox” and it is off-putting on many levels. It’s also more than a little suspect that financial excess and drive-by shootings are the two most prominent outtakes from Black culture in the United States in this series.

The New Gods as an aggressive band of houseless people and portrayals of Metron as a disabled man stammering and writhing in his wheelchair all kind of merges together into an overwhelming feeling of thoughtlessness.

I love Morrison’s work, I love the New Gods, I love Mister Miracle, I love Shiloh Norman – but to all appearances this mini needed a little more time to gestate before it was released to the world. All that said, I wouldn’t refer to this series as “bad” by any stretch. It certainly works as a way to get from point A to B, but crucially it doesn’t tell us anything we didn’t already know.

The advertisements for Seven Soldiers consistently reminded readers that one of the Seven Soldiers was going to die by the end of the story arc, but it’s already obvious that it’s going to be Mister Miracle because he is the one whose story is given the least effort. His story here is defined mostly by vague cultural stereotypes and without much in the way of substance, and it’s a shame.

Sara Century has written for several websites, but is most prominently one of the writers over at SYFYWire. You can find her website here which has more links to her work, and follow her on Twitter here!