Batman has been in fights all his life: physically, mentally, spiritually. But who or what is his greatest foe? Shelfdust asked some of our favourite comics critics to pick Batman’s Greatest Enemy… but who do YOU agree with?

Talking about Batman is never just talking about Batman, especially not these days. There is of course the question of what version of Batman is the subject at hand: are you talking about Miller or Morrison or Snyder; if Snyder, which one? But people rarely talk about Batman in a vacuum. There’s too many beloved sidekicks, even the ones everyone voted to kill off, and too many iconic villains in his Rogues Gallery to ever just talk about Batman. Everyone has big opinions about which Robin is best and which bad guy is the most terrifying, but for me that latter question has always been an easy one to answer.

Part of the appeal of so many of Batman’s villains has been their ability to be rehabilitated, whether explicitly stated or simply implied. Though Arkham is far from the most reputable and effective mental health facility, it’s still described as an asylum, not a prison. Far more famous than Blackgate Penitentiary, Arkham has been home to a great number of Batman’s foes, and the question that hangs there waiting for readers never entirely seems to go away: how many of Arkham’s residents would be villains if they received proper treatment or medication? There’s this persistent idea that if Gotham had functional mental health services, Batman would very quickly be out of a job.

On the whole, it’s not a bad idea. It prompts interesting conversations about the role poverty, education, and healthcare play in creating foundations for strong communities free of violence and makes Gotham map easily onto real world cities that are facing real world shortages and trauma. It invites readers to consider what Batman is at his best, and question why some writers seem to focus on the worst parts of his mythos. The problem starts when people begin thinking about rehabilitating specific villains, and especially Batman’s most infamous enemy. It would be too easy, perhaps even trite, to say that the Joker is Batman’s most dangerous villain because of his ubiquity or his unpredictability; frankly he’s around so much that it’s gotten boring and if you’re talking about never knowing what will happen next Harvey Dent can be just as erratic.

The Joker is Batman’s greatest enemy in part because a particular type of person (almost always white men) is convinced that the Joker is more important and fascinating than Batman. This goes beyond Jared Leto and his rat gifts; beyond dancing on stairs; and blaming the world for making him a bad man. Comics themselves are full of stories that think the Joker is the star of something deep and introspective and important, so central to Batman and his mythos that he is granted the same level of attention and weight as the hero in his universe.

The premise of Sean Gordon Murphy’s Batman: White Knight is trying to answer the question of what Gotham looks like when the Joker isn’t a bad guy anymore. Again, not a bad idea in a vacuum. It’s worth asking what constitutes real villainy, and seeing how a city responds when the constant threat of laughing gas isn’t there anymore. The problem here is that Murphy doesn’t shift Joker’s behavior enough to move past simply no longer being a homicidal villain. He may be medicated, he may be educated, but the Joker is still so bound up in his own bullshit that it takes him several issues to notice that his girlfriend isn’t Harley Quinn, or at least isn’t the Harley Quinn he was dating when he went in. It’s a particular sort of self absorption that allows a literal murderer to believe he is somehow the hero of his own story while he can’t be bothered to know the woman he’s sleeping with is a stranger who Single White Female-d his actual paramour, which says nothing of the problems at the root of Joker and Harley’s relationship.

Like I said, there is nothing wrong with flipping the script on what constitutes villainy and heroism. Especially when it comes to a character and a universe that feels so moralistic and absolutist as Batman and Gotham can, attempting to pick apart what makes Batman good and the Joker bad is a worthwhile endeavor. But the Joker is in many ways defined by his villainy, and White Knight proves just how impossible it is for him to escape his most canny and hidden bad behaviors. Murphy is not the first creator to give audiences a Joker who no longer kills people, and without his most dangerous habits he is still a nasty person in the same way that the Joker is in the live action show in the ‘60s or Batman: The Animated Series. The Joker’s badness does not start or end with deaths, but instead with his selfishness and the chaos he sews in his wake. He pontificates with dramatic and dogmatic flair, making lovely speeches about how good he is and how much he wants to be even better, if only it weren’t for the Batman and Gotham, and all the other things that made him bad. 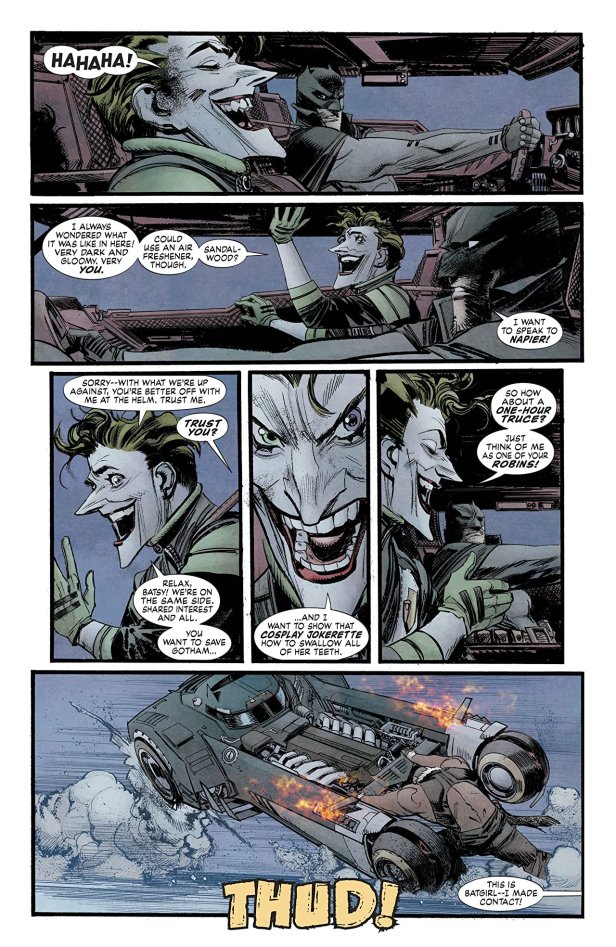 Even while claiming to take responsibility for the bad he’s done in the past, he doesn’t actually demonstrate a whole lot of remorse let alone attempt to make up for it. And then he starts to get bored, and the Joker is always at his most dangerous when he’s got nothing to do. After spending seven issues trying to convince people that Jack Napier, the man who was the Joker when unmedicated, is a good person, Murphy puts Jack right back into clown makeup and green hair but now with the awkward implication that being the Joker is somehow better and more heroic than being just Jack.

Joker is Batman’s greatest enemy because he’s our greatest enemy. He’s a mediocre man who’s convinced he’d smarter, cooler, and more important than anyone else in the world and for some reason, people believe him. We don’t have a lot of people galavanting around with fear toxin to spray unsuspecting civilians, very few dictators of small islands bent on destroying colonialist forces (though I wouldn’t blame them), and as far as I know no one has identified man/animal hybrids waiting in sewers or belfries to kill us all. Sure, we’ve got Elon Musk, but Lex Luthor has always been Superman’s enemy, not Batman’s.

The Joker is that guy in your MFA writing class, the Joker is a man with a “well actually” for every statement, the Joker is the sort of person who grooms and “dates” people decades his junior because they’re vulnerable and he’s popular for some inexplicable reason. We all know the Joker, or some iteration of him, and unlike Arnold Wesker or Manbat or Killer Croc, no amount of competent mental treatment or money can free us of the threat of the Joker, because he’s everywhere. He’s not an invading alien force or a scientist mad with power. He’s a sense of entitlement, righteousness, and self importance that are encouraged in some people from birth, never challenged properly and in some cases allowed to fester and grow. And if Batman: White Knight, Batman: Curse of the White Knight, and Sean Gordon Murphy’s whole ‘White Knight-verse’ is any indication, we’ll never really escape him.

Caitlin Rosberg is a comics critic with bylines for The AV Club, Paste, and Polygon, among many others. For more, head to their site here or follow Caitlin on Twitter here!

2 thoughts on “Batman’s Greatest Enemy Is… The Joker”