Me, a superhero comics fan, reacting to the phrase “Olympic level athlete:” “oh, like Captain America in the classical interpretation where he has peak human ability, instead of the low-level superhumanity he is depicted as having from time to time, but really, considering they’re often in stories where everyone can punch through a wall and dodge bullets, that’s basically that world’s version of Olympic level athleticism, and furthermore, (deserves to die)”

This is the surest sign that I will die and the superhero comics sickness will stay in the dirt over my grave for ten thousand years, infecting every nearby ghost with opinions on why bone claws suck.

The phrase has a different meaning in the superhero genre; it means “bleeds if they get shot, but generally doesn’t get shot, because if you do enough backflips you can dodge a piece of metal that travels two thousand kilometers an hour.” It means a hero that gets by with a grappling hook or a car, as illustrated beautifully in the cover to this comic where Quarrel is running and firing her grapple gun, while everyone else is out of focus and borne aloft by superhuman power.

This issue delves deeper into Quarrel’s love life, and her one-time dalliance away from Crackerjack as she dated her teammate M.P.H. – who has one of the best designs out of all of the Astro City cast. 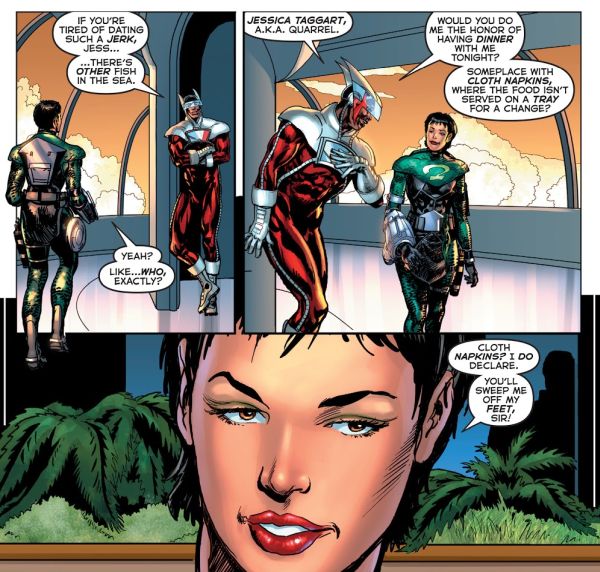 He has a speedometer on his chest. It’s perfect. During this time, Quarrel is wearing her more chainmail-inspired, less high-tech costume as well, signifying that this is still during the days where she was an “Olympic level athlete,” with armor evocative of a certain star-spangled Avenger. It’s an interesting contrast to her later costumes, which veer more clearly into high-tech armor, making her seem more powerful yet diminishing her at the same time.

Her time with M.P.H. doesn’t last, even though he’s a nice guy (though at one point he does veer from nice guy to “nice guy”) and her explanation says almost everything you need to know about her, and the larger conceit of the subtype of super-hero she embodies. She doesn’t fully click with M.P.H. because she feels she has to push herself, physically, in order to keep up with the others – and it doesn’t leave her any time, energy or willpower to improve herself as a sociable human being.

I’m of two minds about this. The adventurer-type athlete is frequently depicted as a thinker archetype (see Wayne, Bruce) and an asshole (see Wayne, Bruce.) There’s a lot of reasons why, but the big one is that if street-level heroes are meant to be more relatable, then you wind up flattering the audience by telling them they’re smart and simultaneously giving them permission to be an asshole. It plays into the Genius Shithead archetype, which after everything from Sherlock to House, is an archetype that could arguably stand some rest.

But on the other hand, those were all men, and there’s interesting tales to be told when it’s a woman being a jerk who’s a little broken inside and doesn’t have the energy to really do anything about it. It’s relatable in a different way. We all – especially as we get older – recognize parts of ourselves that we’re not sure we’re ever going to be able to change, such as – to pick an entirely non-personal example – an affinity for superhero comics that you are sure people judge you for having. We all wind up a little bit resigned to the scar tissue of our lives.

More than anything, that’s what Quarrel comes off as – resigned, but uneasy with her resignation. She knows, and has known for years, that she needs to change, but she doesn’t know how, and after a crummy day of fighting chess-themed supervillains who don’t even have the common decency to shout “Queen Takes – QUARREL!!” any more, isn’t it okay if she just wants to take a load off with her dirtbag boyfriend who doesn’t ask anything from her that she doesn’t already want to give?

Which brings us, again, to Crackerjack, who staggers back in after being viciously beaten, the bright colors of his costume smeared with blood, his love-god exposed hairy chest gashed with inch-think claw marks. Even in an era where Bruce Wayne is defined by the mass of scar tissue on his back from all the bullets he almost dodged, it’s a troubling sight. Even a superhero who’s an Olympic level athlete feels immortal, and now he’s that little bit closer to death.

Crackerjack and Quarrel have an old-couple argument and discussion, with Crackerjack worn down by seeming inertia towards admitting that he needs to change up the game a little in order to keep going. But it turns out to be a ruse on his part, as a bubbling subplot in the background – the youth serum of the Black Rapier – finally rears its head, and Honor Guard is called in because someone who looks just like Crackerjack went and stole it.

And just as they figure that out, they are taunted by the holographic image of…!

GORMANGHAST – THE LIVING CASTLE!! He’s got Crackerjack, and they probably have to save him, we guess!

Will the heroes win, and save the day? Well, there’s thirty-two issues to go, so probably. But in the words that Quarrel keeps asking throughout this story, “how’s it all going to end?” That’s the biggie right there, and it’ll all be revealed (hopefully) next week.