Why doesn’t Batman have a Green Lantern ring?

It’s an oldie but a goodie; if Batman is who he is because of sheer naked willpower, he should have one of those sitting on his finger. This is one of the many reasons that imagination is a better driving force behind the concept of Green Lantern than willpower, since willpower is every superhero’s ally, and furthermore, Kyle Rayner was – (is dragged off stage by a glowing green vaudeville hook)

Back on topic. The real reason is metatextual – Batman stories have a rhythm to them that a Green Lantern ring would change or negate. A story about a man who beats up criminals with smoke bombs, guile and planning is different than one operating within the confines of jewelry from space that makes whatever you think about. They co-exist by the superhero logic of “don’t worry about it.” Otherwise you start to wonder why Captain America doesn’t have an Iron Man suit. 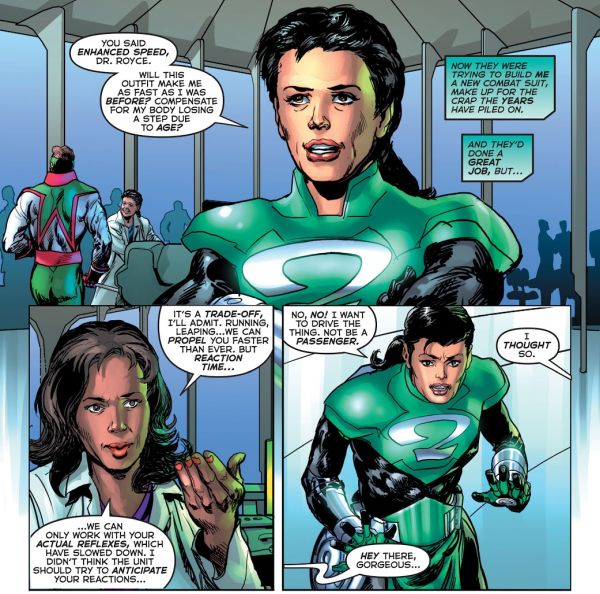 Of course, if you can tell a good story about why Captain America – or any “within human ability” superhero – needs an Iron Man suit, “don’t worry about it” can feel free to step aside, and that brings us to this story, as Quarrel contemplates an upgrade to the power armor suit that’s kept her going for the past decade or so. She used to get by with grappling hooks and wrist darts, but now she needs a power suit. She’s shifted heroic archetypes in order to keep being a superhero, and she knows: it’s only a matter of time.

As she thinks back to the past, there’s a cute touch in that when she shows up on the scene, people already recognize her, because time travel happened and a future version of herself had a brief but memorable career. Details like that, that are pure superhero bullshit but that make sense within the genre, help establish the theme early: Quarrel is, perpetually, in over her head, and thrives there.

She meets the Street Angel, a formerly dashing, smiling vigilante that the 80’s happened to, and they set to cleaning up Astro City, with Quarrel registering as a bounty hunter, one of those details that reminds you that oh yeah: bounty hunters are real. Her true identity is protected from the public, through legislation meant to get around the perennial problem of superheroes acting like cops but having secret identities, and she manages to keep her family together long enough for them to grow up – and on top of that, she joins Honor Guard.

And yet, she’s restless without a challenge, and then along comes Crackerjack… 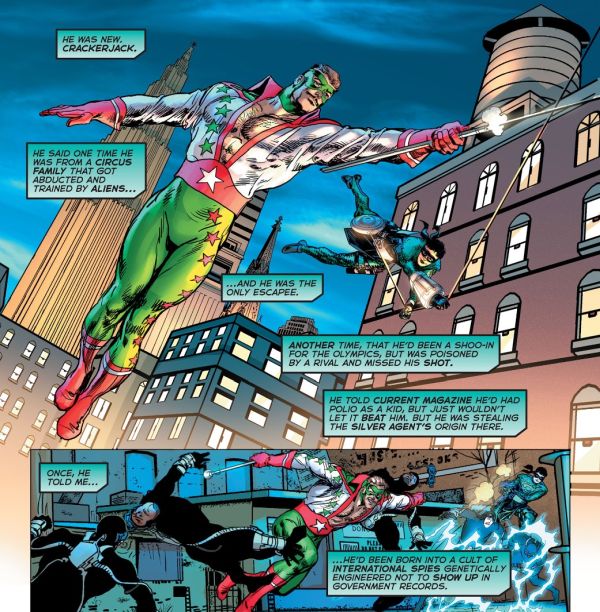 … who is, from the hair on down, is a challenge, and one she can’t resist.

It starts out a fling – the kind of person you know is bad for you, but dang it, you’ve been good, and maybe you deserve the indulgence of someone who’s bad for you. It says a lot about Quarrel – that she’s never had a “normal” adult job and that superheroing is all she knows how to do or how to relate to others, and so she’s only ever going to date other superheroes. Even when she wins the lotto, even when her family is all grown up, she keeps at it, even though, as the years go by, it becomes less and less of a good idea.

After an injury leaves Quarrel bedridden, it takes an unusual turn – Crackerjack demands that she keep up her training while she’s in rehab, in a scene that I’m not sure I’m comfortable with. 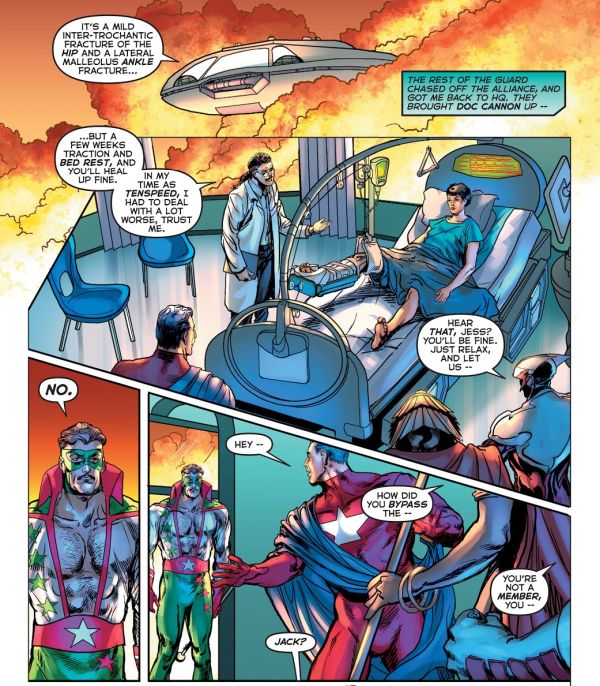 I get the idea behind it, that heroes without powers have their own way of dealing with things and that superheroes with powers might not understand them, and that there’s a bond between Crackerjack and Quarrel over the subject – they’re shown training together at length. I even get why Crackerjack is trying the tough love angle, pushing Quarrel to keep training even while she heals – he is, after all, an asshole.

But there’s “fun asshole,” and there’s “serious asshole,” and this scene feels like it nudges him over the line just a bit. This might be how he shows he cares about Quarrel, but there’s a lot of men who’ll swear they care about a woman even as their actions and their words are not on speaking terms.

Quarrel does call him on him being an asshole in the very next scene, even as she admits that he’s been there for her throughout rehab, and at the very end she and Crackerjack in the present day seem resigned to being in each other’s lives. This is a relationship that’s endured, but not an entirely healthy one – Crackerjack’s bad for Quarrel and I don’t think anyone would disagree. It’s full of baggage and it’s messy and they almost seem to hate each other some nights. 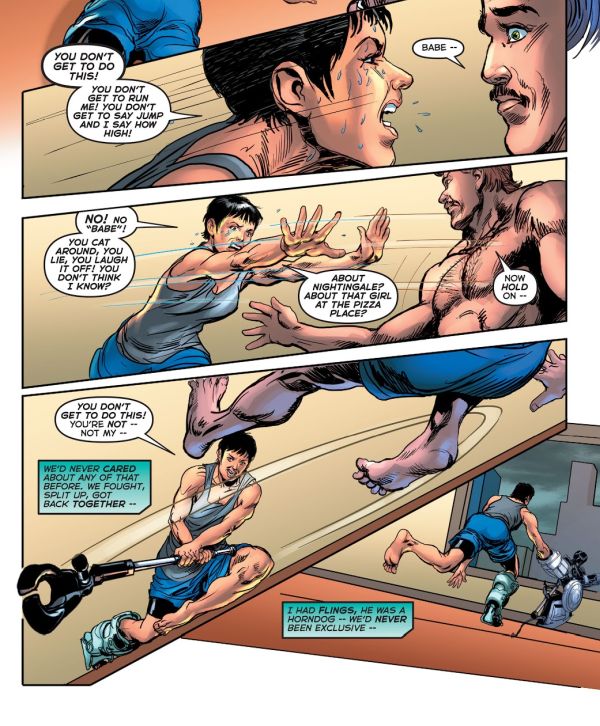 And yet, I think about how last week I commented that the fun of Crackerjack is that he is an asshole, but he’s an asshole in a fictional reality where he’s not really hurting anyone, and there is a release to that; there is something to be said for the release of having him be a fictional bad boyfriend as well. Someone who is thrilling and dangerous and just a little bit bad for you, but because he’s not real, you can indulge the fantasy – or process the (hopefully past-tense) reality – of having a shitty boyfriend, without actually having to go through having one for real.

And maybe Quarrel, being the most human member of Honor Guard and clearly not entirely without her damage as well, is allowed to have as relatable a flaw as having a boyfriend who is kind of shitty, as long as the narrative knows what it’s doing. I think it’s pretty clear that Crackerjack and Quarrel’s relationship isn’t entirely healthy – and neither are they.

The most notable “only a human” hero who has a slate of unhealthy relationships is, of course, the aforementioned Batman, who is often portrayed as kind of an asshole. In the next issue of Astro City it explores whether that’s true of the archetype of the non-powered hero in general. See you then!