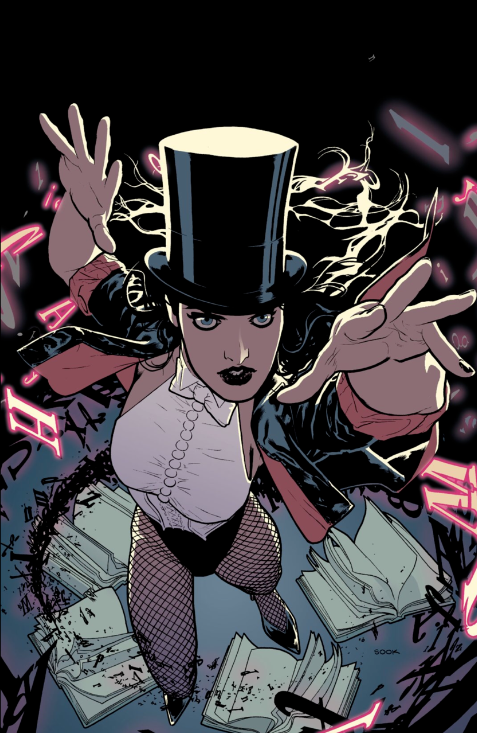 What does it mean to be full? Satisfied. Content. Complete. Most people ascribe a positive connotation to fullness, but not me. I disdain the feeling. I don’t let myself feel full – I bypass full and go straight to stuffed, overwhelmed. Guess you could say my head is a swamp; a big damn mess.

The arc of Zatanna in Seven Soldiers of Victory takes us through the turbulent waters of emotions. In Zatanna #4, we end up at the beginning, or is it the end? That’s the tricky part of all of this. Time fluctuates within Morrison’s narrative as merely another tool at their disposable, flexible, and malleable whim. All-time is an artifice. We can all speed it up or slow it down just by our mere acknowledgement of it.

Magical battles happen where the outside meets the inside.

In the beginning of Zee’s story, she believes she has lost something. Her ability to perform magic, her father’s lost books of knowledge, something. In issue #4, we finally get to the truth of what Zatanna has been missing, faith in herself. A lack of self-belief will leech energy from the soul and what’s left is a vacant space where negativity is free to roam and grow.

Negativity seems to flourish so easily within our minds. There’s a perfectly reasonable explanation for this. The brain responds to negative stimuli faster than positive stimuli, it is meant to. It’s on the hunt for possible threats. Thanks, evolution. What happens when we are the threat, or when we view the entire world as dangerous? Distortion.

Zor, an Unknown Man, exists outside of any traditional narrative structure. He emerges on page seven to battle with Zatanna. Zor corrupts the well-intentioned, he distorts reality. For a moment she believes the shadowy figure is her father – the reader sees the hope on her face – and in this instant she is illuminated and bare. The desire to see her father reflects the most basic human need: the desire to see the face of those who love us. There is a comfort in the face of love and Zatanna has been searching for it everywhere. Everywhere but where she has to ultimately find it, within herself.

“When what is and what seems to lose distinction. And belief becomes a weapon more deadly than bombs.”

What we believe about ourselves and one another is our reality. Belief can be used for good or ill. Goodness is often at a disadvantage to evil, it takes effort. Whereas evil merely requires passivity. Belief is a formidable power.

Zor lobs a satellite into Zatanna’s mouth. I can’t believe this is happening.

Is any of this real?

SSoV is a series of unending questions about time, space, creators, life. It is a constant probing at the architecture we create to give structure to our lives. It’s asking you why the artifice of this thing, this comic, means more to you than the experience or story itself.

Every choice we have ever made exists within us. What a terrifying realization. Our decisions emanate from us like webs, all the good, all the bad; it all puts tension on that line. We want there to be more slack, forgiveness. Sometimes we get it, sometimes we don’t. That’s hard.

When Zatanna breaks through the fourth wall on page 14, it tells us that none of this really matters. Rather, it matters as much as we let it.

Zatanna cannot forgive herself and she cannot reunite the discordant parts of herself without breaking through. At the beginning of #4, we see her looking at her costumes with Misty and it feels like a goodbye where she’s leaving behind her former self.

Sometimes we fracture in order to survive. I am one person here, I am another here. I respond to this scenario using this mask… I will attend to that trauma another time. It’s in a box somewhere, I’ll find it when I’m ready.

The Time Tailors allow Zatanna to see outside of her reality. What is exposed? Others are out there pulling the string. There are deadlines and profits, there are rules and lo’ they must be attended to! There are the limits of time and the form itself. The scaffolding of the comic breaks away and along with it, our notions of what this story is or should be.

Comics are like people in that way. I guess that’s why I love them. When you need a comic (or person) to live up to standards in a way they were never designed to; well that’s where pain happens. We can let go, we don’t have to hold on so tight or be so rigid. It’s okay to be lead down a different path, even if it is one we do not yet understand.

I cannot help but think of these books within the context of our modern life. So often we use the language of being broken. We are incomplete. We are empty. It is the language of disconnection. We reconnect to our self by reaching out to and helping each other.  This is the lesson Zatanna has learned.

Zatara tells Zatanna the books of knowledge have always been contained within her. These four books were never separated at all, they were always part of a whole.

Zatanna sees herself in Misty and so her care for Misty allows her to care for herself. As she works to build Misty’s confidence, she builds her own. It is worth discussing that when Zatanna finally speaks her truth, she does so to Misty.

“I don’t think I really lost my powers, I only lost faith in myself.”

Self-belief does not manifest in isolation, it comes from accepting others belief in us. Misty believes in Zatanna. Zatanna believes in herself. This moment of freedom is possible through Zatanna being vulnerable. Speaking our own truth isn’t just about laying claim to the good, it is also laying claim to our bad. Zatanna shows us it is okay to break. It is okay to fall apart. It’s okay to be full.

“I am an alphabet trapped in a tree that wants to become a book.”