One thing about comics I should love, but don’t have a lot of affection for, is the notion of a universe you enter when you shrink down real small.

The basic idea is sound (okay, it absolutely is not sound, but “sound” in terms of comic book science is grading on a reaaaaaaaaal steep curve.) If life can exist on other planets and in other dimensions, life can exist where a molecule is like a planet. But, for example, the number of molecules in the average human body is 2 times 10 to the power of 25, making every human a galaxy, and in that respect, the idea that you’d be able to consistently enter the same subatomic universe time after time is pretty unlikely. And if just shrinking real small is what sends you into the other universe, we have perfectly good dimensional travel right over there.

I know, I know. It runs on don’t-worry-about-it, the same thing that lets people fly without any means of propulsion and that lets you dodge bullets if you do enough push-ups. Still, everyone’s got that line.

Ostensibly, “Sorrowsday” is about a microverse, and I have to admit that as microverses go, it’s one of the better ones – since the story isn’t really about the microverse itself, but the people in it. Illustrating all of this is Tom Grummett, and you know who is a severely underrated comic book artist? 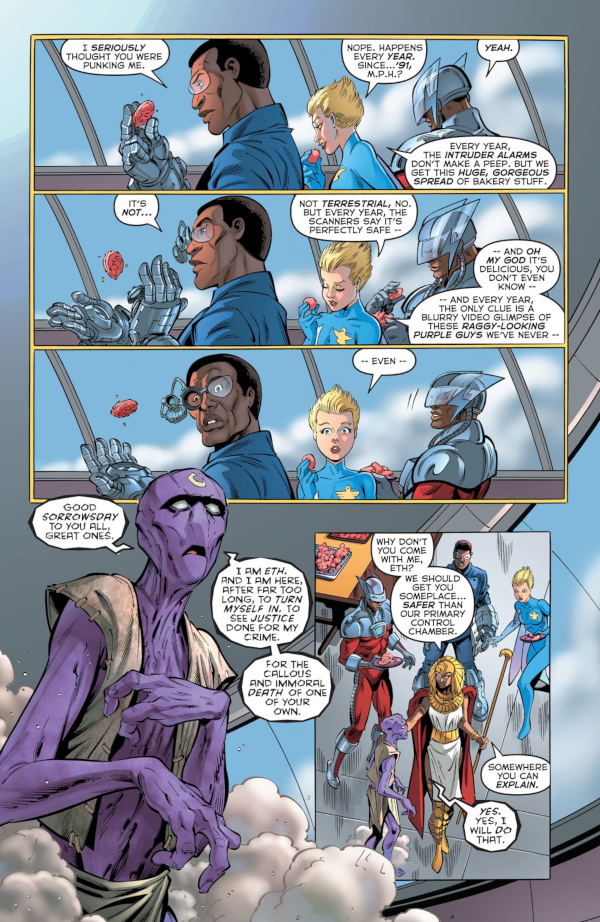 Tom Grummett is a severely underrated comic book artist. Everything about his art is so pleasant to look at – the fine inking, the classic superheroic figures, the facial expressions, the two little bob-lines when M.P.H. moves his head. This is a talky scene that is as entertaining to read as any fight scene. I haven’t had time to read it, but I’m glad that the recent Section Zero Kickstarter hit goal. He deserves all the work he gets and more.

It’s Red Cake Day at Honor Guard HQ, the day of the year where red cake appears without warning and is super-delicious, just one of those things you have to get used to in a superhero universe. It’s interrupted by Eth, an alien expanded upwards from a microverse, who blames himself for the death of one of their own – at the hands of Krigari the Ironhanded, the “hey, I had that action figure, it was the only one left on the shelf” kind of supervillain Astro City does well by.

Krigari the Ironhanded gets bigger every time he fights, taking him from the Ünterverse to the quantum realms to the lands of RGB and CMYK, where presumably their laws are based on what format to print your comics in. He’s coming for Eth’s people, and since they are not warriors, they’re doomed to die – until something changes.

That something is Druin, who looks like a character that you come up with after you discover pot in high school, and he guides Krigari towards those who will one day defeat him: Honor Guard. Kirgari takes this about as well as any conquering comics warlord would, and sets his sights on Earth, becoming more and more obsessed with it as he diverges his fleet from Eth’s homeworld.

Druin is a neat archetype, the advisor who is the cold counterpoint to the villain’s white-hot rage, the kind of person you feel deep down will turn on them at the last second and either give the heroes a win, or an even bigger threat. And eventually it all does come to a head, as Krigari diverts his fleet from Eth’s homeworld, and starts a full-on invasion of Earth. He’s finally defeated… 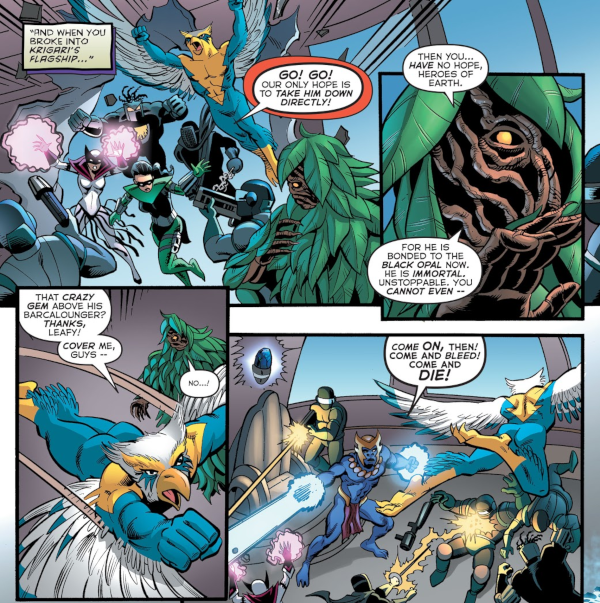 … by Stormhawk! Remember him? Sure you do.

Stormhawk is another character with an inglorious background, showing up briefly in The Dark Age and being one of the “oh yeah, that guy” characters that make Astro City feel like a fully fleshed out universe. He goes out like a champ, dying the kind of death that feels earned even if it’s only over a couple of panels; no deconstruction of superheroic death here, no attempt to make it feel random and “realistic.”

He dies, and Druin is revealed to be Eth, who manipulates plants such as the grain that the red cake is made from. He and his people have been weighed down with guilt, sending the red cake every year as repentance, and Eth’s guilt has finally gotten the best of him, and he accepts whatever justice is deemed necessary for his hand in bumping off this minor superhero.

But that’s the thing about superheroes – not just Astro City superheroes, but any superhero. The minor leaguers are only minor in the grand scheme – not enough people bought their comic, they never clicked right on the teams. To a person who collected every run, every appearance, and can quote you the theories on the obscure continuity error that never got explained, they do matter. For no other reason than the same reason people like strawberry ice cream or one tabletop RPG system over another; people just like what they like.

So Stormhawk is not one of the greats, but to Eth, he was his favorite, just like to some fictional fan who’s collected every comic with Stormhawk in it, he’s their favorite. 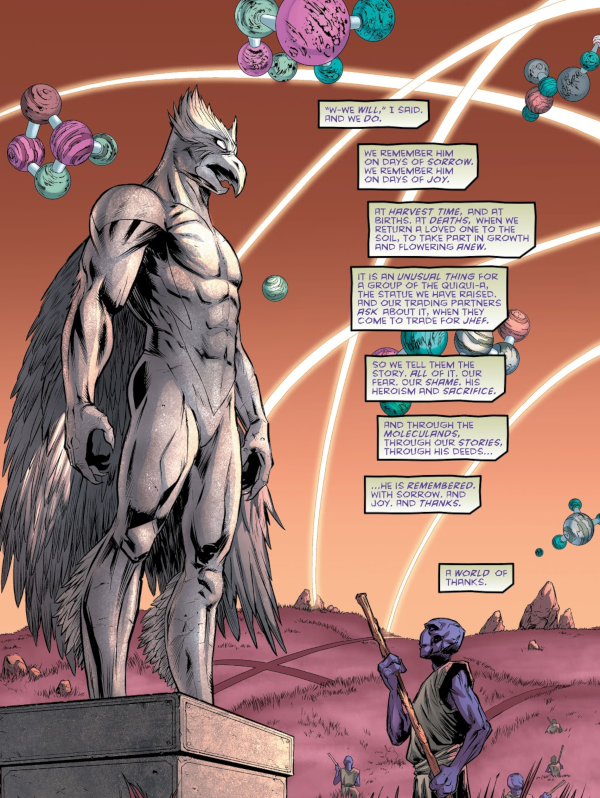 And the final page – where Cleopatra has deemed Eth’s penance to be that he is honor-bound to memorialize this hero – is actually genuinely touching, putting the whole notion of an also-ran superhero into sharper relief. Any given superhero at the level of the JLA or the Avengers or Honor Guard has a 50% likelihood of having materially contributed to the preservation of all life in the universe at least once; there really is no such thing as a minor superhero when you look at it like that.

Stormhawk’s story is over, but what happened to the people and things he left behind is a story for another time. Next week, it’ll be a return to more familiar faces, as Quarrel (yay!) and Crackerjack (fuck that guy!) return to deal with the greatest nemesis of all: time.