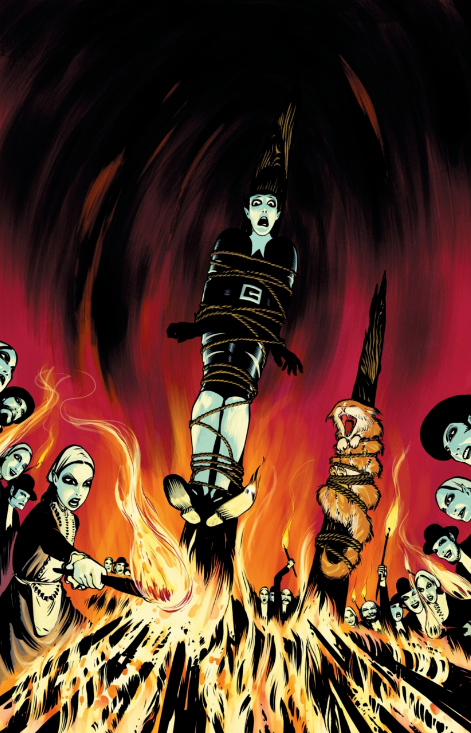 Endings are tricky, especially when they’re not really endings. Klarion #4 finishes the Witchboy’s four-issue entry into Grant Morrison’s Seven Soldiers “maxi-series,” but there’s not much of a conclusion to be found here. The final page (spoiler alert) portrays Klarion and his familiar, Teekl, guiding a drill-ship through the Earth’s crust, as Klarion proclaims, “Today I shall be a soldier,” emphasis Morrison’s. TO BE CONCLUDED IN SEVEN SOLDIERS #1! the final banner teases, along with A SOLDIER MUST DIE – WILL IT BE KLARION, THE WITCHBOY?

There’s a reason, after all, that DC doesn’t try to sell these Seven Soldiers series as individual trade collections, even though there’s surely a buck to be made from eager Zatanna and Mister Miracle fans who don’t know any better: Seven Soldiers is truly a 30-issue tale, and those of us writing about the four-issue chapters within it are a bit hamstrung by that structure.

While I’ll resist spoiling Klarion’s role in Seven Soldiers #1 for now, it’s not as if Morrison and artist Frazer Irving waste the page space allotted in issue #4. The first panel opens tight on Klarion’s panicked face, with each subsequent panel revealing more of the scene. As the cover reveals, Klarion has returned to Limbo Town — and has been received as a heretic, with his mother and sister ready to burn Klarion and Teekl at the stake. (If you set your story in a secret community full of Puritan-inspired witches, a burning-at-the-stake becomes a bit of a Chekhov’s gun; it simply has to happen) Before Klarion’s own blue-flesh-and-blood can immolate him, though, his dire warnings of invading surface people are proven true, as Mister Melmoth and his goons burst into limbo town via drill-ship, a shuddering SKKRRAKOOOM from letterer Pat Brosseau marking their arrival.

My first instinct as a critic is not, I promise, to see phalluses everywhere, but there’s a good case to be made that the sexual-violence implications of this drill scene are intentional. Morrison is a hyper-sexual writer, not in the sense that they put their characters in overtly sexual situations, but in that they constantly find delight in the psychosexual and the fetishistic. The Invisibles is awash in deviant subculture, New X-Men turns the Scott-Jean-Emma triangle into Freud’s telepathic wet dream, Marvel Boy’s love-interest-cum-antagonist dresses like a dominatrix, and Wonder Woman: Earth One… is not subtle in its approach to the benefits of a willing dom/sub dynamic. Mister Melmoth forcefully penetrates the walls of Limbo Town with a drill-tipped vessel, announces that “Daddy’s home,” and proceeds to boast about the “spider-sex” he had with all of Limbo Town’s ancestors, violating puritan women to produce a hybridized race of Sheeda-people.

There’s no ambiguity to Melmoth’s plan: he orders his men to strip the women of Limbo Town and move them to breeding pens in preparation of the coming Sheeda invasion. None of this is pleasant — the threat of sexual violence never is — but neither Morrison nor Irving cross into the salacious or sensationalized (the term “spider-sex” aside).

During Melmoth’s foul speech, Klarion and Teekl, at the suggestion of Klarion’s sister, sneak away to ring the Sabbat bells nine times. What Melmoth takes as a celebratory gesture to mark his return is instead a call to arms. The Grundy-Men — the fallen dead patriarchs of Limbo Town, resurrected to toil forever more in the fields — rise from the earth to CRUSH! and KILL! the invaders. Even Submissionary Judah, the religious fanatic whose oppressive presence helped drive Klarion from home in the first place, crawls out of the dirt, still half-transformed into the horrible Horigal chimera beast.

Judah, the original villain of this tale, thrusts the Submissionary’s rod into Klarion’s hands and urges the young Witchboy to take on the terrible knowledge bestowed upon the role. Klarion, apprehension clear on his face, questions this only with a meek “Me?” Whether it’s intentional or not, Irving keeps the rod out of frame for the rest of the scene. If Klarion has indeed kept hold of it, it’s out of sight for Klarion’s march toward the secret spot where he must call forth the Horigal (the second villain faced in the series) to defend his people, who only moments ago wanted to set him ablaze for his sacrilege.

As Klarion and Teekl approach the glowing sacred object — the final taboo Klarion can break in this cloistered world — he remarks that it’s “only a map.” Readers see the item at an askew angle, obscured by its own radiance. Is the sacred object a simple subway map, continuing the symbolism of Limbo Town as a community kept ignorant by its controlling leaders? Or is it something more arcane, with Morrison implying that knowledge of the forbidden is a map toward freedom from bondage? We don’t know for sure, as Morrison and Irving then cut back to Melmoth, whose forces have suffered losses but have succeeded in quelling the Grundy rebellion. As in previous issues, Melmoth’s dialogue drops hints at the other stories playing out in the Seven Soldiers maxi-series, oblivious to Klarion and to readers sticking only with this tale.

The arch-villain extinguishes whatever crooked life remains in Judah’s battered body and steps into the shadows, where he calls out to “Brother Klarion” in what is otherwise an all-black panel. With the page turn, Irving reveals his gleefully twisted design for the Klarion/Teekl Horigal: a multi-limbed beast of fur, claws, wicked eyes, and gleaming teeth. At Submissionary Judah’s (final) request, Klarion has become the very monster that nearly consumed him three issues ago, all in defense of a community he sought to leave and almost died defending.

“Who lost an arm? Whose arm is that on the floor?” Melmoth’s goons shout, as the Witchboy/Draaga-Cat monstrosity tears through the invaders. Not even Mister Melmoth himself poses any real challenge; within four panels, Melmoth goes from escapee to limp corpse. Unfortunately for the residents of Limbo Town, whatever passes for Melmoth’s soul or essence immediately reappears in the flames of a burning pyre, promising his descendents that he will never truly die, and that he’ll return to get his vengeance once the Sheeda finish their harrowing.

As an aside, the Horigal reveal is easily one of Irving’s most memorable pages from the entire series. With digital painters like Irving, Stephanie Hans, Clayton Crain, and Daniel Acuña, you often find a sort of sketchy muddiness to their early work, more akin to concept art than clearly readable sequential art. This same looseness can reappear under tight deadlines, and there are sequences throughout Klarion where Irving’s clarity takes a slight dip, but not here.

There’s a crispness to the blacks throughout this issue that turns some scenes into off-kilter woodcuts — a perfect match for the twisted Puritanical setting. Over a decade later, Irving’s ability to deploy gradients and textural effects has maintained his status as one of the most jaw-dropping artists in the game, but Klarion’s comparatively simpler style is an example of the perfect pairing of artist and subject at the perfect time in that artist’s career.

With Limbo Town’s invasion at least temporarily postponed, Beulah — Klarion’s sister — uses her magicks to separate Klarion and his familiar. “The Witch-Women know secrets the men never learn,” she reassures her brother-beast. Beulah was also the catalyst behind the Grundy plan, which bought Klarion precious time to become the Horigal; Morrison may invite frequent critique of his leading ladies, but it’s not as if their stories are wholly absent competent, crucial women. All that’s left after the division is to clean up the pieces.

On the penultimate page, the surviving members of Melmoth’s troops are strung up on the stakes and put to flame. “Smell how they burn!” Beulah exclaims, grin plastered to her face. Klarion urges his mother to close the gates of Limbo Town, and promises to send Leviathan—the hive-mind creature of 250 lost children that Klarion met earlier in the series—to either her aid or her care, or perhaps both. War is coming to Blue Rafters above, Klarion knows, and as I spoiled earlier, he intends to be a soldier. Klarion’s mother asks Klarion if he will indeed take up Submissionary Judah’s role — a job for life — but Klarion wants to be “many things” before he dies.

I suggested in my first essay that Klarion is a deceptively straightforward “Hero’s Journey” story from a writer not exactly known to stick to the standards. This fourth and final issue risks hewing toward the most conservative aspects of that template: to defeat the antagonist, Klarion must embrace the culture he rejected in the beginning. But while the Horigal was the key to ending Melmoth’s immediate threat, Klarion stands fast to his principles. He has processed, as best as one can, the dissolution of the lies that structured his upbringing. “There is no Witch-God!” he shouts in this issue’s first panel, even as his former neighbors brandish their torches. Against threat of a fiery death, Klarion refuses to bend once more under the lies of his religion.

Klarion may not have a proper ending — the villain is not truly defeated, and Klarion’s journey is concluded in another title — but it’s undeniable that his character changes and grows as a result of his journey, even if he begins and ends, physically, in the same place. This is no rote origin story for the Witch-Boy, whose trademark impishness is muted here, replaced by a streak of gallows humor shared by his Limbo Town peers.

At the risk of reading too much into Morrison’s intentions, there’s something to be said for keeping Klarion’s journey here a bit more incremental and contained. For young people raised under the yoke of conservative religions, just freeing themselves from that mental and emotional hold is a trial worthy of a Tolkien trilogy. Klarion’s rumspringa in the second and third issues may feel circular, but he’s not the Witchboy he once was, and that’s worth ringing nine Sabbat bells in celebration.

Steve Foxe is a writer, editor and critic, having worked as the comics editor for Paste and written for publications including PanelxPanel. Check his Paste byline here for his most recent pieces, and find him on Twitter here!