As it’s set in England, though, and because Allison has such strong instincts as a writer, there are a lot of jokes and references which might fly over the head of the international audience. Here, then, are our annotations to help guide you through life at Sheffield University.

Max Sarin is very good at maintaining continuity across issues, isn’t she? Not only do you have the girls in the same outfits as last time, but the room is set up the exact same way we left it – right to Daisy’s jacket sat on the back of her chair.

Esther immediately goes into mothering mode when there’s a guest in the house, tea at the ready and bemoaning her ‘daughter’ Daisy’s choices. Why do mums want to see their children’s friends? They always make a point to mention it. Esther brings out the biscuits, as well, which is a sign that this is a momentous meeting indeed. Biscuits only come out for people we either like, or we want to like us. Grandma Doreen might get the biscuits when she comes round, for example, but Granny Phyllis doesn’t warrant the same treatment and she knows why.

Small talk is another classic mother move from Esther here. Ingrid’s response shows how little self-doubt she has, taking a biscuit as she advances on the alpha female before taking a cool sip of tea once she knows she has broken the leader. In turn, she then switches across to make sure Susan is drinking before she steps onto her toes – again, making sure she makes herself the dominant presence in the room. I’ve never studied psychology so I’ve completely ade all this up based on my own guesses. Sorry, psyche-students, I’m sure I’ve got this all wrong.

Lego isn’t easy to take apart – it requires either a standard edition brick separator or a willingness to use your teeth.

Ingrid finishes the page by reaching into the cupboard herself to get something – total power move.

A “pashback” is a flashback where you think back to a time when you were pashing with someone – kissing them.

Inamorata is Latin for “female lover”, which is both impressive Latin skills from an English student and a quickly studied read of the room. Maybe Esther should be the psychology student here.

China has been growing and developing at increased levels year-on-year for decades, leading many investors to think there will at some point come a time where the country hits a stopping-point and crashes back down – a “hard landing”. That assumes China has things like regulatory law, however, which is perhaps a bit optimistic.

Messaging people used to be about making sure you got your message down to a certain number of characters so you wouldn’t have to pay the charge on sending a second text. Nowadays? The world of texting is a highly-coded society where each emoji symbol can make or break lives.

Having said that, I’m fairly certain that the cheese emoji is not the right choice in this situation.

Looks like Bakermax work on a zero hours system, where they’ll give their workers hours as and when they want to. It’s a bad system, most famously used in the UK by Sports Direct, and another way for companies to completely screw over the lives of their store-level employees. Capitalism, man.

The Germans have a reputation for being efficient, in the UK. This is likely because the people of the UK are efficient in no way, so everybody else seems reliable by comparison.

“weak” detergent is such a simple addition to the final panel. You can also see how the grease in the back of the oven appears to have bred sentient life, much like the “malice” that seeps round the landscape in The Legend of Zelda: Breath of the Wild. What a game. We should go play it again after we finish these annotations.

Esther’s approach to the oven on reminds me of the washing-up scene in Withnail and I, though there are no direct allusions. Don’t attempt anything without the gloves! – Shelfdust patron Rob Brewer

Daisy spends some time with McGraw, and tries to broach the idea that she might be bisexual, interested in girls and boys. I’m not particularly convinced by McGraw’s response here, to be honest. It looks like he’s erasing bisexuality from the discussion, calling it “flip-flopping” rather than understanding it. He also considers what the man would think rather than what Daisy’s “friend” needs.

The highest score you can get at once in darts is “180”, which is made up of hitting the triple-twenty spot three times in a row. It’s impossibly difficult to do – so the fact Daisy hit three scores that make up 160 in just her first go? Another sign that she’s going to grow up to become the Paul Newman of Sheffield, burning up the pool halls across the North of England.

Susan’s smoking is catching up with her in increments. There’s a lot of walking up hills as part of a university lifestyle – weirdly, it seems to make up at last 40% of day to day activity, if my maths are correct – and nobody at university is truly equipped for such travails.

Look how smug Ed is in that last panel, all legs and strides.

Ingrid is wearing a shirt with a skull on it. Is she trying to get into Esther’s head?? No, she’s just German.

Notice how Daisy gets her wallet out the moment she’s in the room? She arranged the date, she’s determined to make sure she pays for the first drink.

It is not English tradition to force a stranger out the door. However, it is tradition to panic the moment anybody walks into your home, and to spend your entire time subtly hinting that they can leave anytime they might wish and IF that could be at some point soon, that would certainly be a brilliant idea for everybody’s sake.

Daisy has spent the first part of her date apologising and feeling guilty. There’s lust in this, but Ingrid definitely gives off that “only at university” sort of vibe.

Friedrichshain is in a part of Berlin that has a lot of techno clubs, a big punk scene, all the stuff that Daisy doesn’t really have any interest in aside from Ingrid’s interest in it. You can immediately tell the vibe as soon as you see Jimmy – perfectly nice, it’s just this isn’t really the right scene for Daisy.

Manchester is over an a hour away from Sheffield, to give you an idea of the distance Ingrid is willing to travel in order to find an authentic dance experience.

The “snake pass” is a route through a set of hills called The Pennines, which split Lancashire (and Manchester) from God’s own county Yorkshire (and Sheffield). £80 quid strikes me as a pretty good deal. The taxi driver is probably giving them a discount because he’s hoping to get laid.

Makina music apparently comes from Newcastle. For any non-UK readers: this is not a very promising sign.

So Ingrid didn’t bring money at all to the date, expecting Daisy to pay for the whole thing. Psychologically she’s right – morally?

Brilliant touch in the second panel where you can sense the bass vibrations bursting through the walls even before Geege opens the door for them. This would be my nightmare. Daisy, however, jumps into it, which you have to admire. 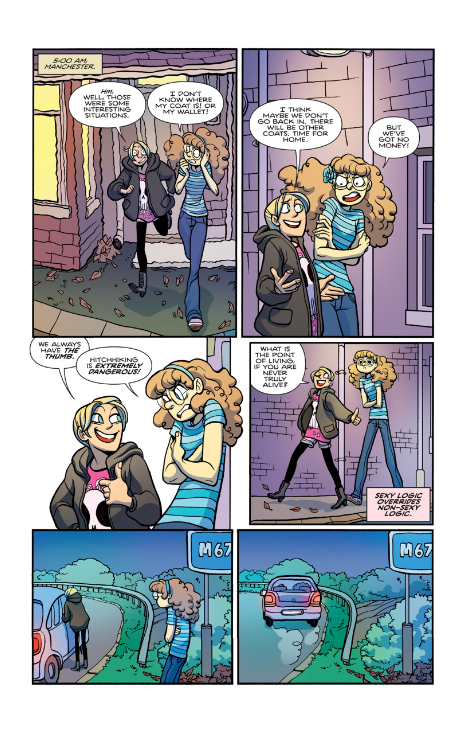 Notice also how Ingrid still has all her stuff? She’s got her coat on, and doesn’t offer it to Daisy despite Daisy’s body language showing how cold she is.

“sexy logic overrides non-sexy logic” sums up this whole evening. The M67 doesn’t get you all the way back to Sheffield, so they’ll have to take another car after this one.

That neighbour is a dirty curtain twitcher, make no mistake. He’s dressed and up by that window at 6.30 in the morning!

Esther being awake this early in the morning is either a continuity error, or she’s got to be up early for a lecture and she’s doing her hair in time.

Daisy is the sort of person who eats something when she gets home after a night out, to protect herself from having the worst kind of hangover when she wakes up. The pros always have a tub of fruit in the fridge waiting for them after they’ve been drinking – eat them before you go to bed, drink a glass of water, you can mitigate a lot of the effects… if you’re young.

Daisy equates Ingrid with danger. Because she’s only just coming out to herself, she thinks of her interest in girls as being dangerous, which is why it feels right to her that Ingrid, her first girlfriend, is a dangerous person. You can understand the mindset.

Daisy is wearing a t-shirt with a slogan on it? It has the Star Trek logo and says “boom”, so it must be some kind of Big Bang Theory reference or something.

The girls give Daisy good advice based on what they know about relationships at this point. Everything is a roller-coaster and Daisy doesn’t know yet what kind of limits she should be working at. I mean, I’m asexual, so I have little to add to this other than my observations that relationships start out at 100mph and it’s exhausting until things start to slow down and you get to a more scenic speed. Daisy just needs to work out what she wants and find her own place within this relationship.

That Esther calls the anime they’re watching “cartoons” is further proof that she’s going to make a wonderful addition at the comics shop.

Another problem in the workplace is that you show any kind of ability other than the one you’ve been assigned to show, people will lean on that and make it part of your day-to-day routine. If you walk in an office and help somebody fix a problem with their powerpoint, then from that moment onwards you’ll always be the person everybody asks for IT advice. If you’re good at making the first cup of tea, you’ll everafter be the tea-maker for the team. And if you prove able to clean an oven, you’ll be forced to stick your head in it every day to keep it as clean as you did that first time.

“Darkling Daughter” could be a paraphrased reference to The Darkling Child by novelist Terry Brooks. Bit of a stretch, admittedly.

“Einfach klasse” means something like “humble, modest, straightforward”. Ingrid is revelling in the lack of chaos in Daisy’s life – although now Ingrid has made her way into that last part of Daisy’s life she was previously blocked from, there’s no escaping that chaos.

Again, that artistic continuity – those clothes in the wardrobe are clothes we’ve seen Daisy wear before. The characters have limited clothing choices!

Susie Pee reminds me of Susie Q, the song made most famous by Creedance Clearwater Revival. It’s also linked to singer Suzi Quatro, however, which feels more apt in this case.

I think this is the first time we have a name for Susan’s dad, who has yet to appear in the series? The fact she calls him “Big Geoff” is real Northampton stuff.

Whitney Cogar has waited two years for this moment, and she nails it.