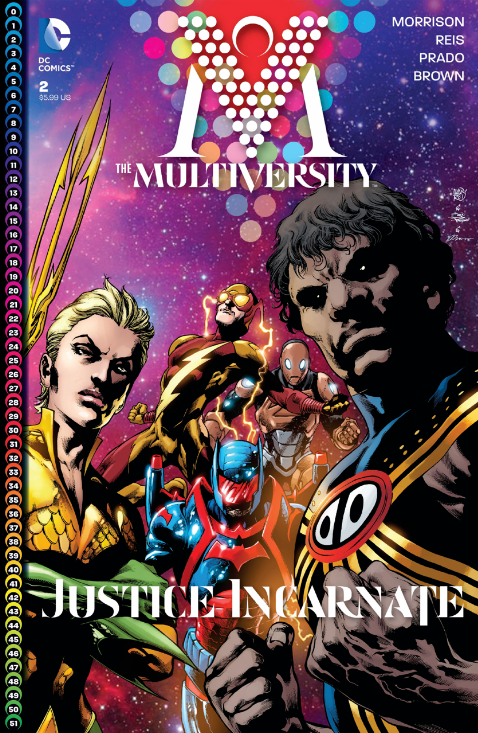 The Multiversity was Grant Morrison’s attempt to show how heroism tries to strive through against every corrupting force which pushes down upon it: the publishers; the readers; the retailers; the need for commercialism ahead of fantasy and justice. It’s not a standard villain who stands and cackles malevolently over our fallen heroes: we are the villains, and everything we do helps further corrupt the perfect ideal which superheroes are meant to represent.

The series repeatedly shows how different influences twist superhero universes and characters in ways which are worrying, dirty, unappealing and generic. The scariest forces present are “The Gentry”, who represent various comics publishers and their need to gentrify the concept of creativity: one of them is a lopsided house of ideas, filled with spying eyes (Marvel); another is an all-consuming Bat (DC Comics). In the first issue of the series as a whole, The Multiversity begins by showing the Gentry wrecking a superhero universe. Heroes are tortured and buildings are reduced to empty rubble, as the screaming sun consumes everything and is ultimately eclipsed by The Gentry: the idea seems potent that all these heroes and lives exist solely at the discretion of their real masters. If a publisher isn’t happy with their comic sales, then everything – good and bad – will fall into crisis.

It’s always lucrative to have a crisis!

Everything is awful, and even the hero of Final Crisis – Nix Uotan, the Monitor, has been corrupted by the Gentry. Worlds are collapsing, heroes falling to dust, and the Gentry have moved into the heads of readers – pushing out original thought in order to offer their corrupted, generic vision of the world.

But this is a comic book, and there is still one last resistance: the House of Heroes, where superheroes from all forms and stories have gathered to form one last united force – Justice Incarnate. And whilst it’s a Superman who leads this final team of heroes, do you know who is organising the resistance? It’s Captain Carrot, of course! Captain Carrot offers a friendly face and a sense of silliness which giggles into the Apocalypse, but he also represents the writers and artists who push back against the corporate decisions of the all-powerful landlords who rent out creative space to storytellers. In his alter-ego of Rodney Rabbit, the Cap is a comic book writer/artist who understands a thing or two about giving people a good story – and loves a happy ending.

In the crushing and soulless world of corporate comics, Morrison argues that the imagination of the craziest writers and artists is the one thing which can’t be stopped by editorial influence. When the heroes head off to find a corrupted world, they land on what is essentially the Marvel Universe: Earth-8, which has alternative versions of Doctor Doom, the Avengers, the Fantastic Four, and the Hulk. They all behave in the expected ways, but it’s the “fight” between Hulk and Captain Carrot which provides the most memorable moment of the issue. The former squashes Cap into the floor, only for Cap to pop up unharmed, in a moment of ridiculous cartooning. In later issues, Cap will get his head cut off – but his body keeps fighting whilst his head figures out the ultimate solution for the problem of the Multiversity as a whole.

Corporate influences and money-focused executives may think they have everything figured out and can plan to make sure they’re always in charge, superhero comics can resist change unlike anything else. You may see comic publishers rise and fall on the back of their film-making divisions, and you may see readership changes and divisions which threaten to tear the industry apart as we all know it: but at the end of the day, a heroic rabbit is always going to snap back to being a heroic rabbit. It’s what he does best, and what people want to see. Nobody who reads this issue can remember the name of the alternative-Hulk who appears, but everybody remembers that time the superhero rabbit bounced back to life and knocked him out with one punch. That fundamental ridiculousness of comics, a medium build on the ridiculous, is what gives it life and will always give it life. 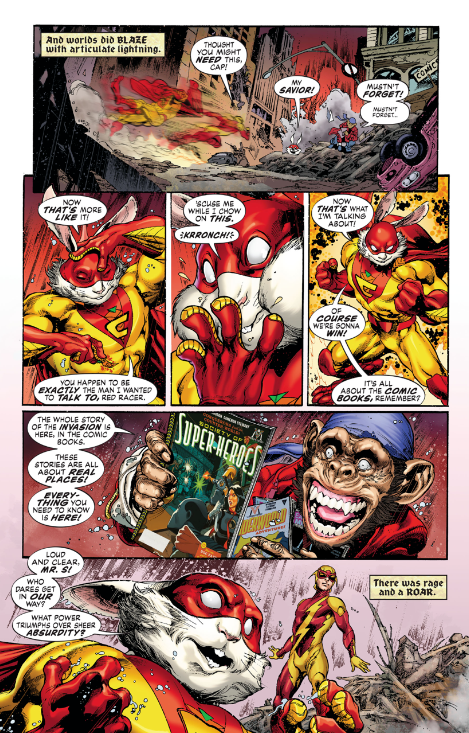 Realism creeps into the Multiversity from all sides, but mostly it comes from the reader themself: the more pages of the story you read, the more complicit you become in everything that’s happening: the characters who die, the worlds that are destroyed, the sense of fun which withers and drains away from universes. But the one character who is there for us through everything is a cartoon rabbit, who never lets the situation become serious, even when he knows he’s facing the end of existence. Carrot constantly babbles on about comic books, and about his own silly continuity which means he has to eat special carrots every ten minutes in order to retain his form. It’s only when the other superheroes realise they need to embrace the absurd that the plan to save the day is formulated in Multiversity #2: a speedster runs over with a magic carrot solely to save Cap’s life.

With the reader being considered complicit in the events of the series, it’s notable that it’s comic books which ultimately save the day for the heroes and give them a chance to escape. The Gentry are not destroyed, but they are pushed aside for one minute so the heroes can regroup, gather, and celebrate. And they’re stopped because Captain Carrot – a writer/artist who understands the importance of cartooning and silliness – gets the rest of the heroes to read some comics and understand why comics are such a great medium. In the first issue Cap asks “who else wants to argue with cartoon physics”, taking a shot at readers who take “feats” importantly and want there to be a ranking system for which characters are most important and powerful. In the last issue he asks a different question:

“What power triumphs over sheer absurdity?”

None. Captain Carrot is the most important and powerful hero in the history of comics, and it’s precisely because he’s not important and he’s not powerful. He’s the banana peel that Doctor Hurt slips on at the end of Grant Morrison’s Batman run. He’s the wild card streak of ridiculous imagination which nobody can prepare themselves against. He’s a pure and silly force that represents the best of what comics can and should always be.

One thought on ““What Power Triumphs Over Sheer Absurdity?” Captain Carrot in The Multiversity #2”