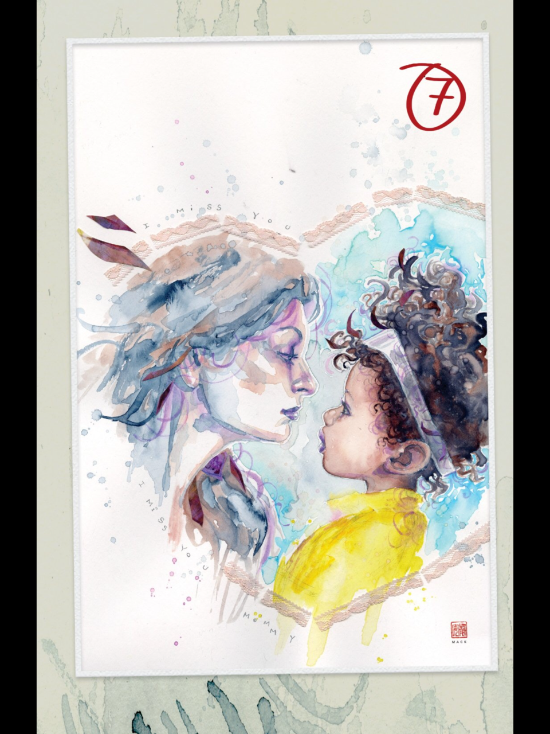 The Jessica Jones success story is something I don’t think anybody could’ve really expected – not least the character of Jessica Jones herself. Brought to life Brian Michael Bendis and Michael Gaydos in the pages of the mature-reader series Alias, Jessica Jones wasn’t really supposed to have existed to begin with. She was a replacement for Jessica Drew – Spider-Woman – whom Bendis wanted to give her own series. So the story goes, as Bendis started writing the comic he realised that the voice he was giving his central character didn’t seem to be a proper fit for the established hero – and so Jessica Jones was created in her stead, adopting the voice and heading off for a very rough life underneath the superhero filled skies of the Marvel comics universe.

Alias proved to be a success – but more than that, Bendis proved to be a success, and so as he headed off for other comics like the Avengers he eventually made sure to bring Jessica along as well. His down-on-her-luck hero found herself a partner in the form of Luke Cage, and the pair were ultimately married and had a daughter, Danielle. From being a last-minute replacement for a different character, Jessica Jones became a centrepiece of Bendis’s Marvel, appearing in his big event stories, showing up for cameos in other series, and eventually being one of four characters chosen to headline a Netflix TV series. She became, arguably, more famous than the character she was an expy for.

With the publicity of a Netflix show, Marvel commissioned a new Jessica Jones series which once more would be mature-reader only, and reunited the creative team from Alias. I believe this would also then prove to be Bendis’ last work with the publisher, as he moved across to write for DC and this would prove to be the last thread for him to wrap up. Fitting, really. I’m going to look at issue #7 of the Jessica Jones comic, however, because that’s the one I already have on my ComiXology account and I’m not paying their prices for new comics right now.

The issue acts as a bridge between the previous storyline and the next storyline, which sees somebody putting out a contract on Maria Hill – another of Bendis’ favourites. Meanwhile Jessica Jones, having hit the bigtime and found a relatively settled life with Luke, has imploded all of it by pretending to have imploded: she and Captain Marvel created a sting operation to catch a group of villains, but Jessica didn’t warn anybody else that she was only faking her new situation. That includes Luke, who had to deal with his wife going missing with their child, apparently going down a dark path, and then APPARENTLY coming back to him to tell him that it was a con and she didn’t really mean any of it.

It’s a fitting way for Jessica Jones to react to her own success, really. The character has always been defined by a self-destructive streak. There are repeated pleas throughout the issue that Jessica was the only person who could have done this and she simply couldn’t have told Luke what was happening, but that’s clearly not the case. Jessica simply wanted to feel desolated again, and this was a convenient way for her to rip away everything that protected her new life. She sits down briefly with Danny Rand – somebody she’s spent a lot of time with in the past, and currently is working alongside as part of the Defenders – and tries to set him up so he can slap her down.

He refuses, and tells her that he has never hated her. By sitting down with Danny, she’s trying to find somebody who can project the same opinion on her that she has of herself, or at least can be a stand-in for Luke Cage. She wants somebody to tell her that they hate her, and have never liked her: Danny Rand refuses to provide that. She doesn’t listen to that, however, and instead immediately changes the subject to something else. When Luke and Jessica do connect later on, she gets a nice moment – and instantly sees this as a way to bring up their recent history, which she knows will drive him away. There’s a consistent streak showing that Jessica wants to be hated because she feels that she should be hated.

How fascinating that it was Captain Marvel – the high point of Marvel by that point, their signifier of female power and heroism – who willingly lets her friend destroy her entire life in favour of stopping some criminals. In this issue, as Jessica and Luke take a small re-conciliatory step in bonding over their daughter’s happiness, it’s mentioned that Carol hasn’t even called Luke to explain what was going on. Not that Luke would listen, but Carol doesn’t seem to have even started to try and help her friend, having previously used her. Bendis was never a great writer for Carol Danvers, but it’s great bait for Jessica.

Her only explanation to anybody who’ll listen to her is “I had to” – but that’s an incredibly hollow statement. The only reason she “had to” do what she did is so in previous issues the readers wouldn’t know what was going on, and the story could keep them guessing. In-storyline, she didn’t need to hide this from any of her friends – she simply chose to. This issue sees Jessica making a series of choices – whether to buy alcohol from the supermarket; whether to intervene in an argument between two strangers – and each time she makes a choice which is arguably correct, but just as arguably wrong.

She views everything through her own perspective and thinks of herself first, which is why she struggles to connect with the perspective other people have of her. It’s a really consistent trait for the character which is frustrating but authentic to read about. Jessica can continue to see success as a character and as a person in these stories, but her short-focus means there’s always a new way for her to self-destruct everything again.