Not everybody is going to be the top villain of their time, and that’s okay. There needs to be a Toad for every Magneto; a Wizard for every Doctor Doom. If every single threat is the tip-toppest of threats with no equal, then everything runs at a constant high-stakes panic – and in entertainment there’s no point in having everything have the exact same stakes as everything else. If there isn’t a threat level, there isn’t a real feeling of threat. Everything becomes a threat, and you’re not being entertained anymore.

It’s why twitter is so singularly effective at causing people to feel helpless and worried: every single panic which comes to the fore is a cataclysmic event, rather than existing in any sort of hierarchy. Every single time something goes wrong, social media tells you that it’s the end times, and we’re now up against the very worst evil you could ever expect to meet. But the thing is that not every bad thing exists on the same level. Sometimes, sure, you’re face to face with Galactus, Eater of Worlds, Wielder of the Power Cosmic.

Sometimes though? It’s Batroc the Leaper.

Now that’s not to take anything away from Batroc. This former member of the French Foreign Legion is an adept combat specialist, who has a history of intelligent warcraft and a number of victories under his belt. At the same time, he’s a French stereotype with a paper-thin moustache and habit of yelling out things in Francais with little to no warning. He’s not an apocalyptic threat: he’s simply somebody with a gun and an agenda; also a purple outfit and yellow scarf.

When the character showed up in the Marvel movies he was a threat for sure, but he was also summarily dispatched by Captain America. He’s someone to be taken seriously, but the audience is always going to know that he’s a colourful and beatable enemy rather than being somebody who is important and life-threatening. That’s why he’s been able to last in the Marvel comics for so long, really – he’s always going to be a fun, throwaway foe for whichever hero to defeat inside 20 pages.

That’s what Batroc carries into The Unbelievable Gwenpool, showing up early on as part of a minion brigade working underneath MODOK – himself befit with a mohawk at the time, and not exactly considered to be the most dangerous villain out there. Gwen’s defining trait at the start of the series is a self-confidence in the fact that nothing that happens to her actually matters: she is invincible because she’s living inside a comic book, and there are no consequences for any of her choices. She starts working with MODOK because he’s ridiculous and entertaining, and lets her hang out with other colourful characters like Batroc, who seems to be pretty settled in to his low-tier status at the time. The fun is that she’s hanging out with the easy crowd: nothing here is of particular threat to her.

When MODOK subsequently kills her friend, it changes her tone and the tone of the series in a very slight, fascinating way, and it’s at this point that Batroc steps more prominently into the spotlight. MODOK becomes hugely scary at this point, and the single greatest threat to Gwen’s life. After their next mission only just scrapes by, Batroc recognises that Gwen is untrained and unprofessional, and says that he’s going to tell on her. That would seem to be incredibly silly – we’re meant to be worried that Batroc is going to narc on Gwen to MODOK, of all people? No other character would see that as anything to be scared of.

But because there’s a hierarchy to Marvel’s comic book world, it becomes both entertaining and scary at the same time. Batroc isn’t ever going to kill a major hero – but he could very well team up with a stronger villain to take out a rookie antihero. It’s a statement on the nature of comic books and how audiences have been conditioned to view the stories they read. There are a handful of villains who are actually capable of achieving anything after their debut storyline, and even though the world is full of villains and heroes in equal measure? The heroes will always just about stay one step ahead in the end. Batroc talks about this in the issue, but from his perspective it’s not an achievement for heroes. It’s instead indicative of the way they will never really gain a complete and final victory. 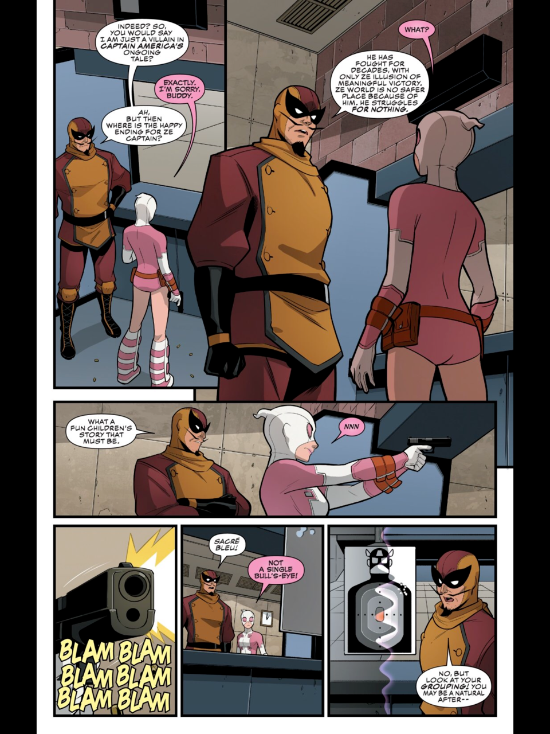 But at least heroes have those temporary victories. That same statement isn’t true for villains. As Krakoa proves, any hero can come back to life eventually, no matter how minor: by contrast, villains and anti-heroes like Gwen are in far more daily peril. When told that he’s a villain in Captain America’s story rather than being the hero of his own, Batroc seems pretty resigned to his fate and doesn’t question that positioning. He’s got the evidence of his history, after all, which has seen him punched in the face by Steve Rogers more times than anybody could count. Each time he reduces a little, to the extent that he’s now just a minion for MODOK whereas in the glory days he had his own brigade of minions to order around.

That again seems to be why Batroc steps up further in the third issue of the series, as he recognises Gwen’s unique abilities and decides to train her up into a bigger threat – in the process improving her standing within the Marvel Universe and giving her a better chance of surviving whatever enemies get thrown at her. By giving her more importance and better “feats”, he in turn gives himself a better chance of getting out of the story alive. He turns her into an asset rather than a liability – something he’s well-versed in, given the incredible mileage he’s got out of his own crazy gimmicks over the years. There’s no reason for someone like Batroc to still appear in comics, because he’s ridiculous: but it’s presumably that very ridiculousness that has allowed the character to continually reappear. It’s arguably his silliness which writers will later dig into in order to keep Gwen going as a character beyond her initial comics run.

One of the main focuses of this issue of Gwenpool is that it erases her past in order to give her a future: by contrast, it’s pointed out that Batroc doesn’t even have a past to erase. He doesn’t exist prior to his first appearance in a Captain America story, so he doesn’t have any memories of his life before that point. Again, he doesn’t really question that – but it becomes very important to Gwen as the story continues. You can see her start to mirror him in the way she erases her origin story – that, and Batroc’s combat lessons, are what allows her to ultimately kill MODOK and secure a few more years of continuity for everybody. Not bad for a French stereotype!