At the start of this story, Ellie is sent off to jail, where the consensus on her culpability in committing crimes is a big ol’ ¯\_(ツ)_/¯. She continues to struggle with repressed memories bubbling up, in this fantastic bit of work from Brent Anderson, Wendy Broome, and John G. Roshell & Jimmy Betancourt: 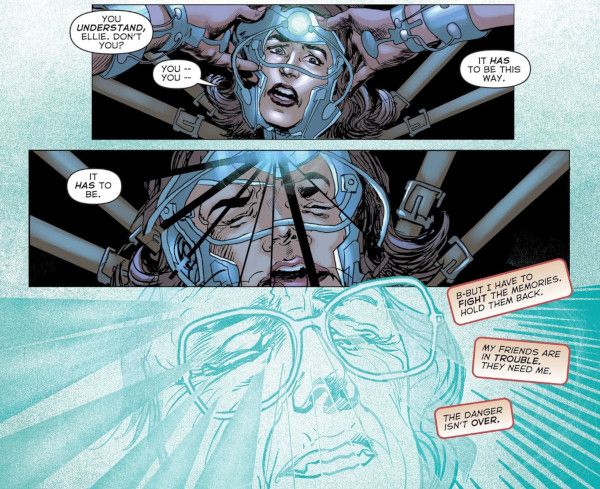 The fracturing of the penciled and inked drawing mirrors in the colors of the subsequent panel, the lettering teetering this way and that to signify being on the edge… fantastic stuff. We don’t talk about coloring or lettering enough in comics, and we especially don’t talk about how each of those elements, from script on down, can reinforce each other when comics are at their finest.

Ellie breaks out of jail, and goes back to her crummy nephew, as she begins to piece it all together, leading to a flashback sequence that made this whole thing click for me… 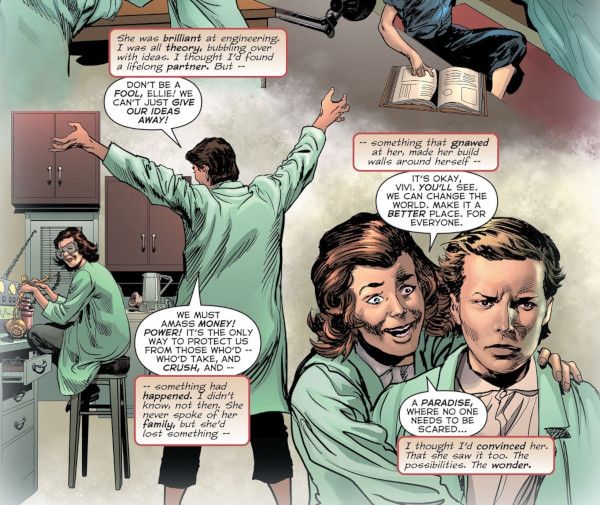 Comics, of course, has another famous rivalry that dates back to brilliant minds in college, with one of those present being someone with a V name. And once Ellie pieces it together – realizing that Vivi stole her brainwaves to make evil robots – she flies off in a giant Kirby-tech hover-chair, which was a very fun sentence to type.

And once the culprit behind it all is revealed, it all clicks into place.

The perils of growing old include loneliness and isolation, as your friends die and your family slowly grows into becoming their own people, and you go from being the center of their lives to merely a part of it. In such times, family – by blood, by marriage, found or manufactured – becomes more important than ever. Ellie’s robots have grown beyond being a hobby and into an extended family that spans the globe – albeit one that tends to get employed by super-villains – and in the end, her family can’t bring themselves to attack her, just as she can never bring herself to turn her back on her nephew, even if he is a bum.

Like everything else in superhero comics, robots are a metaphor. In our world, robots look quite a bit different from walking, talking androids; they tend to be machines designed to assemble cars, computers that engage in a thousand stock trades a second, or algorithms that keep us engaged with social media regardless of whether or not it’s healthy.

But robots in comics can represent anything from human fears of mechanization, to an exhaustively catalogued culture with its own political struggles, to fear of dehumanization, to – again, simply being something convenient for the hero to smash into a million pieces without dealing with the resulting hamburger. And sometimes even that last, simple metaphor can be expanded outwards into a metaphor for family – found family, but still family – that is complex and difficult and in the end, worth more than ever the older you get.

All’s well that ends well; the villain’s plan is foiled, Ellie gets her nephew’s head on straighter, and a robot is repurposed into a beekeeper that, incredibly, still insists on the bonnet. (I suppose it’s for the bee’s sake, should they get stuck in a gear.)

Next issue is my favorite Astro City story of all time, and one of the first comics I ever covered for critical purposes. We’ll see how I feel on the second go-over in a week’s time. See you then!