Obviously, you want your heroes to beat a baddie, with an action-packed climax that shows how powerful they really are. But you also don’t want to see what a super-strong punch will do to the human body, because that much gore turns the genre into something a little uglier and a lot less earnest.

Enter the robot henchman; steadfast, loyal, and ready to get its ass kicked for you, the reader. This story is a tribute to that most noble of henchpeople, and the people (or person, in this case) who makes them.

The Ball-Bearians. I hope Busiek and Anderson took the afternoon off after coming up with that.

This story is firmly rooted in the land of classical superheroics, where there’s an off-hand mention that Honor Guard were all turned into children at one point and nobody thinks to try and use that to eliminate aging and create an overpopulated world. Likewise, the question of why you’d create and deploy robot henchpeople when real people exist and are probably cheaper is answered with the classic response of “don’t worry about it.” Instead, it settles into the niche of exploring the life of someone who does worry about it – someone who loves robots more than people, the classic eccentric that too often gets exploited in comics.

Ellie is an elderly woman, a little distant and not all there, who runs a roadside attraction in that part of America where there’s a lot of sand and a lot of sky. Her attractions are super-robots who’ve been beaten by superheroes, and she’s a savant at keeping them well-oiled and operated. She’s poor, but not unhappy, and so when her nephew Fred comes by to stay, she can’t bring herself to say no.

All throughout the issue, it’s heavily hinted that Ellie is compelled to avoid remembering something – some manner of memory block in her head, that hint at a life before retirement, communicated in a mildly unsettling manner by tilting, as if teetering on an imaginary ledge as Ellie tries to look anywhere but down. Spending all her mental effort on not looking down allows her to be easily pushed around by her nephew, who has ideas about the museum. 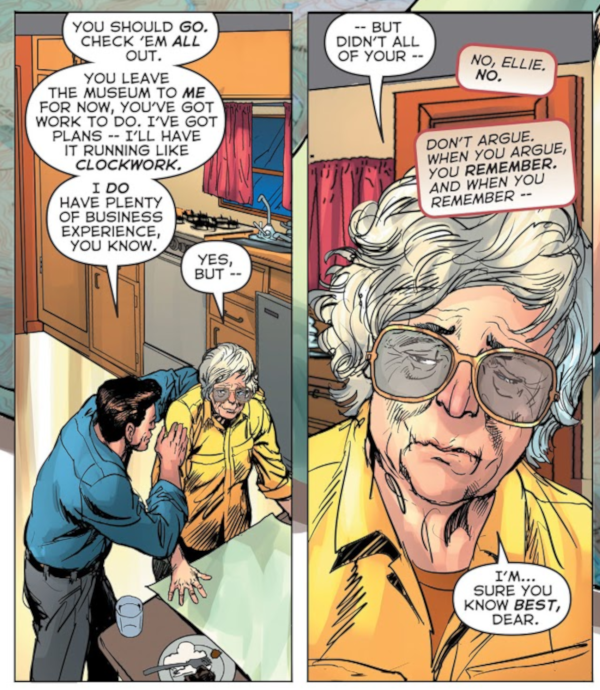 Ellie loves robots and robotics for their own sake and is happy to make money on the side, but Fred sees a business opportunity, and thus Ellie runs into the age-old dilemma of the hobbyist: take a hobby that’s fun, but not paying the bills, and try to turn it into a living or not?

There’s no set answer – money is hugely important to our lives and no one can really be faulted for trying to make money if they’re already keenly aware of every cent in their bank account and every dollar in their pocket. But a hobby can be anything we want, free of the profit motive, while even a dream job is still a job. There’s also a hint of – not exactly elder abuse, but a fast-talking man exploiting familial ties in a real underhanded, skeevy way, as he rapidly inserts himself into Ellie’s life and starts to act like the museum is his.

And of course, the profit motive is present in crime as well, even if the economic sense in inventing a robot to knock over a bank boils down, again, to “don’t worry about it.” And that’s where it all goes wrong – because if the robots were all meant to be used in criminal activities, and Ellie restored them all…

… that means that their old owners might want to see them resume their old jobs, even if the robots themselves don’t want to.

What happened to them – and to Ellie – is a mystery left for issue #15, which I’ll cover in a week’s time. See you then!