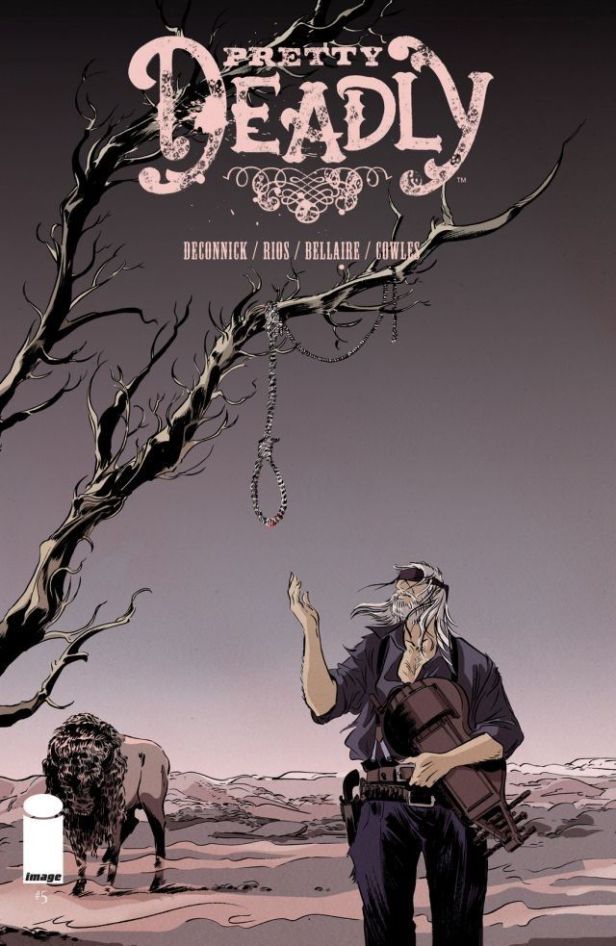 Is purpose defined by character? For Sissy, who takes up Death’s mantle in Pretty Deadly #5, the answer is yes — but also no. The duality of her nature makes her the ideal gardener and, by extension, the ideal caretaker for the soul of the world; she is born of violence and blood, but raised with love and laughter, and she fears becoming a monster even though she already is one. She is literally born to replace the heartbroken, bitter, malicious Death — whose entitlement makes him arrogant, which ultimately makes him evil.

Nothing about Sissy’s arrival in the world goes as planned; that much is obvious. However, by the time she reaches Death’s domain, all the pieces seem to have fallen into place, making her ascendance inevitable. Coyote, Ginny, Fox, Big Alice, Molly, the Shield Made and Beauty all play a part in Sissy taking up this role she’s been meant to play all along. She’s forced into it because her purpose is predestined; no matter what path she takes to this point, she will always become Death. She will always become the gardener.

Pretty Deadly is very Kantian in that sense. No matter how many parallel timelines there are and no matter what choices Sissy makes, she always walks the path to her predetermined ending. The thing is, even though she fears becoming a monster, she embraces her new role with vigorous, single-minded intensity.

Old Death becomes a villain by growing complacent. In choosing to abandon his duties, Old Death allows the world to fester in a way that breeds everyday horrors, then nurtures them into violent, inescapable threats. When Beauty slays him, she says she’s freeing them all — and she is. When Sissy becomes Death, the whole world shifts, because this young girl hasn’t been raised to be neglectful or silent in the face of evil; she’s been raised to care, and to love, and to survive by whatever means necessary.

That is the difference. Old Death was entitled enough to believe that he could live forever by laying down his sacred duties as if they did not matter; Sissy doesn’t have the same entitlement, and she never will — she’s been an outsider since birth, forced to live on the margins of society, begging for scraps and never staying in the same place for too long. Sissy is the ideal gardener not only because destiny says she is, but because her character is one of kindness and caring and strength. Sissy is stubborn to a fault, and even in this duty she does not want, she will stick to it because that’s simply who she is.

In a single moment, Sissy goes from being a young girl who doesn’t understand why death can’t be removed from the world if it means everyone can live forever, happily, to being an old spirit who understands that in order for life to thrive, death must thrive too — as illustrated by the garden. Under Old Death’s arrogant and neglectful rule, the garden languished; the reapers wandered; the dead did what they pleased. The moment Sissy becomes Death, she embraces the dichotomy and dedicates herself to tending the garden, to keeping life alive by not only allowing, but sometimes encouraging death.

There are several elements in this transition of rule worth examining, from the question of nature vs. nurture, to the role of destiny, to the power discrepancy between Old Death and Sissy-as-Death. As each layer is peeled back, another is revealed, which is not only a mark of excellent storytelling, but of the complex character motivations instilled in the core cast of Pretty Deadly. It would be easy to cast Sissy as a weak child whose fear of leaving the people she loves makes her unsuitable to fulfill the duties of Death. It would be equally easy to say that Old Death is a villain who intentionally allows the world to burn in order to have what he wants, forever, damn the consequences.

It would be easy, but it wouldn’t be true. Old Death is a villain; there is no doubt about that. But evil isn’t always as obvious as a skeleton face and a big gun. Old Death looks and acts the part; by the time we meet him in Pretty Deadly, he has spent so long away from the garden and so many days denying Beauty the freedom she craves that he’s become cruel, relentless, and cold. But again, that’s born of his complacency; it’s born of his arrogance and his entitlement.

Consider, for a moment, how the most powerful people in the world can look in the mirror each day and not feel the crushing weight of every single person they’ve harmed, either directly or indirectly, by being so full of their own wants that they refuse to see others’ needs. That’s Old Death. He is insidious because he is recognizable.

Sissy is an unlikely hero; she even goes on a hero’s journey, of sorts, though the path is all twisted and the conventions aren’t quite the same. Those elements of her character that could cast her as weak in fact make her one of the strongest, most capable people in this whole story. That’s why she’s able to take up Death’s mantle and fix what he’s done wrong, though that shouldn’t be her responsibility. Even when she takes charge, she is still forced to clean up his mess — and that, too, is insidious because it is recognizable.

Sissy is born a monster, but not in the same way that Old Death becomes one. This difference is what makes her becoming Death so powerful, and what makes her a character worth rooting for even when she takes up a role that seems so distinctly against everything she is.

Samantha Puc is a writer and critic hailing from Montana. She’s the Managing Editor for The Beat, with bylines at Rogues Portal and Bustle, amongst many others. She can be found on Twitter here, and you can visit her website here!

One thought on “The Reapers: Revisiting Pretty Deadly #5 with Samantha Puc”