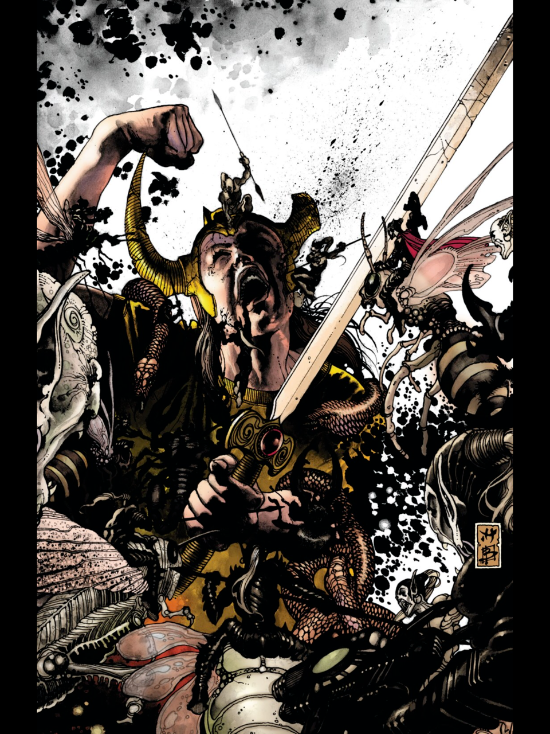 The penultimate entry in Shining Knight pumps the brakes hard, moving from a breathless fish out of water story that delivers plot points at a dead run to a languid police interrogation. At the outset of the issue Morrison and Bianchi set up the self inflicted fall of Galahad from perfect knight into a murderous automaton under Glorianna’s control by ordering the creation of a new weapon – the narration says that the weapon’s creation broke a “dreadful covenant with nature” and “split the building blocks of matter itself,” implying an allegory to creating the atom bomb by splitting atoms.

It’s an easily overlooked allegory, but it ties directly into the parallels between Galahad, Flex Mentallo, and The Filth’s Max Thunderstone; all hypermasculine avatars of pure heroism corrupted or exploited by forces of corruption and degradation. The nuclear warfare allegory in Shining Knight ties directly into Flex Mentallo #3 and the protagonist’s meditation on the correlation between reaching adolescence under the threat of nuclear annihilation and losing faith in optimistic heroic narratives.

It’s an intricate sequence that weaves together fantasies of nuclear annihilation with the sensory oblivion of orgasm but the key connection to Shining Knight is how the narrator in Flex Mentallo connects the death of adolescence and imagination to the images of nuclear annihilation that he found in anti war zines. The connection between cold war anxiety and the dominance of pessimistic realism in superhero comics extends beyond the anecdote to the implicit critique of Watchmen in Flex’s journey centering his search for a missing analogue of The Question and/or Rorschach.

For the most part, Seven Soldiers of Victory stands out as an ideal entry point into Morrison’s denser, more difficult works like Doom Patrol or The Invisibles by laying out the mechanics of his most ubiquitous themes like the resolution of binary opposites into a synthesis in easily understood terms – but Shining Knight #3 works in the opposite direction, requiring a fuller understanding of the Morrison oeuvre to see what he’s driving at.

He returns to the fundamental dynamics of Flex Mentallo in Shining Knight, but steps back from the specific politics of superhero comics, Cold War nuclear anxiety, and the intrusion of selective, cynical realism by cloaking them in Arthurian legend. What was fundamentally an internal struggle over delayed maturity and loss of innocence in Flex Mentallo is reconstructed in Shining Knight as a cosmic battle with a clear external enemy.

Where Flex Mentallo resolved the feeling of existing in a fundamentally flawed, incomplete world as a loss of imagination tied to a loss of innocence, Shining Knight and Seven Soldiers of Victory as a whole attributes that gnostic unease to Glorianna and the Sheeda as a cyclically colonizing force.

In this issue, Glorianna poses as an expert in antiquities to infiltrate Ystin’s police interrogation, giving her the opportunity to flirt around the edges of her own legend, seemingly trying to bait the legitimate FBI metahuman specialist into outing her. Glorianna presents herself as the truth behind the lie of conspiracy theories and junk history positing a fixed cycle of the rise and fall of civilizations.

Glorianna suggests that the rise and fall of civilizations over millennia is as natural and inevitable as decay following ripening, identifying herself with decay by implication, suggesting a kinship with Darkseid as the living embodiment of entropy that would come to fruition in Seven Soldiers of Victory: Mister Miracle. Glorianna asks the rhetorical question of why previous empires didn’t expand endlessly and why the Incas didn’t build spaceships.

Morrison is clearly flirting with the impulse of ascribing unexplained phenomena to extraterrestrial intervention, but the Arthurian framework of Shining Knight and Glorianna’s specific connection to Queen Elizabelth I keep colonization at the forefront. Which is the fundamental answer to her rhetorical question about the Incas.

The Sheeda’s ties to imperialist conquest are stated explicitly in the debut issue of Shining Knight, but it’s a motif that finds a multiplicity of expressions across Seven Soldiers of Victory, particularly in the puritan colonial aesthetics and ideologies on display in Klarion. That dynamic appears in much more insidious ways in Shining Knight, hidden in the subtext of Glorianna’s conspiratorial musings but also built into the series’ basic structure.

Just like the Sheeda, anything that we consider to be quintessentially English is appropriated from a colonized culture. This is just as true of Edmund Spenser’s The Faerie Queen as it is of tea. The trappings of Arthurian myth that Morrison leveraged for Shining Knight has its origins in The Mabinogion: Britain’s earliest prose stories put down in Middle Welsh. When Glorianna references the “four imperishable treasures that Arthur and his knights stole from the people of the Otherworld,” she’s referring to Morrison’s usage of the Preiddeu Annwfn, recounting Arthur’s journey to the Celtic Otherworld.

Morrison removes any doubt about his intentional association of Arthurian lore with its Middle Welsh origins by using Welsh as the basis for Ystin’s indecipherable speech in previous issues. In the second issue, Ystin’s re-entry into language is executed from a Lacanian perspective focused on the shift from a purely sensory experience of the world to one governed by language, but there’s also a separate layer of the colonizing effects of language at play.

Glorianna and the Sheeda as the embodiment of Spencer’s The Faerie Queen are aligned with English as both a language and expression of hegemony. Ystin as the representative of The Mabinogion is aligned with the Celtic colonial subject. It’s a motif that takes a startlingly explicit form when Galahad is summoned for the climactic confrontation between Glorianna and Ystin, representing a colonized, degraded body.

While Shining Knight #3 certainly represents a lull in the action, a close reading reveals a strikingly subversive handling of the English imaginary – and threads that lead back to several other key Morrison texts.

Veronique Emma Houxbois is a writer and critic whose work can be found on Comicosity, London Graphic Novel Network, and WWAC.  In 2016 she was one of the contributors to the Love is Love anthology published by IDW. She can be found on Twitter here and on Patreon here.