The thing about bigotry is how insidious it is.

It can sneak in anywhere, from directions you’re not expecting, and once you’ve trained your eye to recognize it you can’t unsee it. You see it in all your old favorite shows and movies and books and yes, comics. At best, you can go “well, it was a different time” or “it’s a problematic favorite,” and at worst, you have to leave it behind, as you’ve outgrown it – and it, being static, can never grow as a human being does.

This isn’t in reference to Astro City, so much as the kind of story that “Victory” is playing homage to – the Goofy Villain Who Got Dark. The villain at the heart of this story stands revealed, and he’s a big yellow guy dressed like a gladiator. But relax, everyone: he’s actually very serious!

This is Karnazon, who’s probably from outer space. He used to knock over banks and probably tried to eliminate Winged Victory with an extremely contrived plot device that the writer came up with based on the scientific principle of “this is due in two days.” He gets decked in the snoot and goes to jail. See you next month, fans!

Nowadays he’s about constantly demeaning Winged Victory in an over-the-top, explicitly gendered manner, which is probably meant to be much more mature and informed about gender issues but is just as silly in its own way. Complex gender issues aren’t easily resolved with a headbutt, and a villain who constantly reminds the (female) reader that the world is full of bigotries great and small can ruin the escapist potential of what is, at its core, an adventure story featuring a magic woman with wings.

Karnazon’s revamp – along with the hints that Goldenboy was rechristened as Ladykiller and takes that name literally – is about the potential for misogyny in the Gritty Reboot. The revamp that starts with good intentions towards more mature fare and leads exactly where that road is paved; the half-step towards a different story model that pauses at that half-step because the publisher got cold feet or the creators were just ill-prepared for where things were going to go. The half-step that leaves the story too mature for children’s fare but not nearly mature enough to be taken seriously as a feminist tract. Compared to the story of Maisie from last issue – mature in the best of ways – Karnazon’s cries of “submit, like the woman you are!” feel hollow and trite.

But Astro City doesn’t have to pause at that half-step – it can have Winged Victory decide she needs to change her outlook on life and her mission. 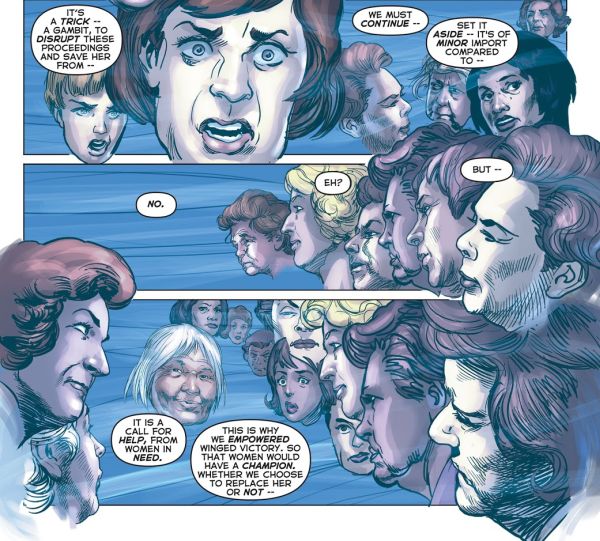 Before the final battle, she was summoned to face the judgement of the Council of Nike, which are already considering a solution – abandoning her, and their investment in her, because she and her mission have been tainted by scandal. From a coldly pragmatic perspective, they have a point – a mission to rescue all women comes before the feelings of just one.

But if the mission is to be there for women in their time of need, wouldn’t it be betrayed at the onset by abandoning one for the crime of not being perfect? Because to be a symbol for women everywhere, that’s exactly what Winged Victory needs to be – she needs to be not just a feminist hero, but The Feminist Hero, embodying all that feminism is, even the parts where details are still furiously argued over to this day. She needs to be separate from men in her own space, as well as standing with men and showing that she is their equal; she needs to be an aggressive sword-swinging ass-kicker as well as a nurturer and a caregiver.

She must be capable of anything, at any time – and the demand that a representative of a group be perfect is a form of oppression all its own, one that the Council has internalized.

Winged Victory makes it through the meeting, and decides to change things up in her organization, letting the media through her doors and getting a better sense of how her organization operates. Patriarchy and bigotry will adapt, as it always does – going from dismissal due to secrecy to dismissal due to transparency and the resultant messy details that get revealed. But that’s how the battle for equality keeps being fought, with neither side being static, and Winged Victory has come through it all still willing to fight it.

The final page is interesting, in that it feels like the long-running culmination of a story seed from all the way back in the sixth issue of Astro City – the idea that Winged Victory has a secret identity she never uses and hasn’t tried to hang onto. In a sense, she’s as much Captain Marvel (the guy with the lightning bolt at DC, not the fighter pilot with the sash over at Marvel) as she is Wonder Woman – someone who grasps onto something magical and slips into a new identity as easily as the reader slips into the blank-slate power fantasies at the heart of superheroes.

But she never changes back, because her life has become the cause – and throwing her life into her work was her way of coping with her life being destroyed. It’s a legitimate response, but so was keeping Samothrace out of the public eye, and the patriarchy did what it always does: it adapted. The cost of walking away from her destroyed life was walking away from a life that was hers, and not just hers but everyone she loved and cared about. To walk back – to piece up the pieces, sew the stitches, and keep on – is a worthy response too. 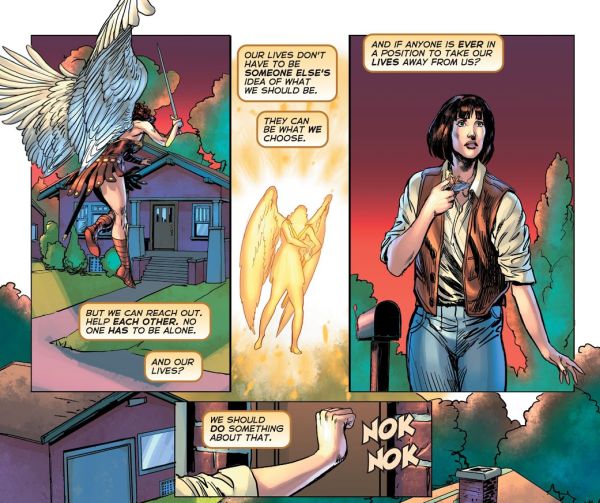 The eternal question is, “why does Captain Marvel even bother turning back to Billy Batson?” Winged Victory’s answer is simple: Winged Victory, as mentioned before, must be every woman, but Lauren has the freedom to be just one. And as vital a struggle as it is to show everything a marginalized person can be, it’s just as important to show what they don’t have to be – to let them be defined as much as what they’re not, as what they are.

Next issue of Astro City shifts its perspective to another woman, doing what’s often called “women’s work” – but it’s never that simple in the big city. See you then!