In a lot of ways, World War 2 is the war that never ends in superhero comics.

It’s the era that birthed the genre as we know it, of course, with the mystery men leading to Superman and the superhero boom, waving flags and punching Nazis. For all that the early days of the genre got wrong, much of it was fully formed from the get go. The superheroes were just, their villains insidious, and punching enough people made it all okay.

Of course, if you go back to those old comics looking for a firmly established line drawn against the evils of bigotry, you’re gonna be pretty disappointed, because the second Pearl Harbor is bombed, those staunchly anti-fascist tracts fill right up to the brim with the most racist caricatures of Japanese people you could possibly imagine. Still, ugly as it was, it’d be a mistake to erase it, because the politics of the time were ugly as well, and that brings us to the central story of this issue. The Confessor has his team of sidekicks, the Choirboys, knocking on doors, and discovering that people who’ve recently fed into the lies swirling around Winged Victory tend to disappear when questioned.

Samaritan is alternately busy with his own crisis points – he is the chief narrator of the issue – and frustrated with his inability to help Winged Victory, both because it’d cause as many problems as it solves for an eminent feminist superhero to need help from a man, and because the ongoing investigation is not playing to his strengths.

Meanwhile, Winged Victory meets Maisie Shimura, a Japanese-American woman who is a member of the Council of Nike, who gives Winged Victory a moment of respite in the midst of chaos. There are rules against her contacting Winged Victory directly… 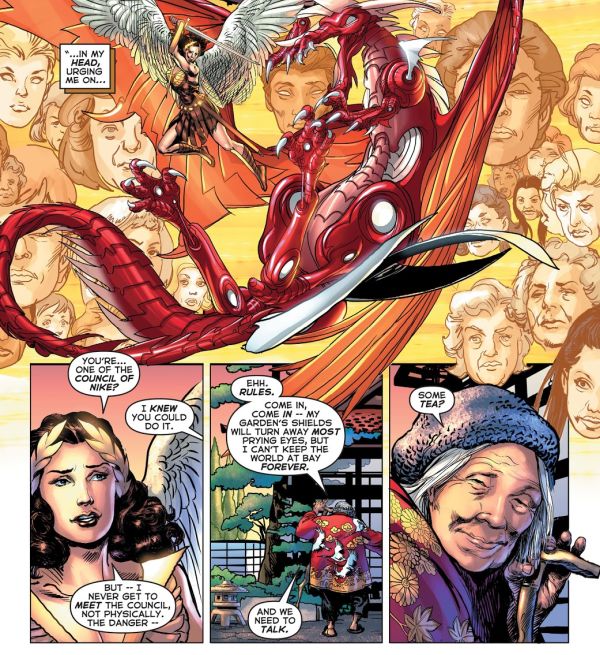 … but of what use is a rule if it hardens the heart against a soul in need of aid?

Maisie shares her story, which begins with the internment of Japanese-Americans – even those born on US soil, in one of those uncomfortable details of the second World War many would just as soon forget. It’s a bit more difficult to claim an erstwhile stance against the perils of bigotry abroad when you’re letting it continue on, or manifest in entirely new forms, back home. The superhero at its most jingoistic feels at odds with the early days of a character like Superman or Wonder Woman, where the struggles of class and sexism are far less codified by the boundaries of nations and ask some uncomfortable questions about the nobility of the Us in the Us vs. Them conflict. 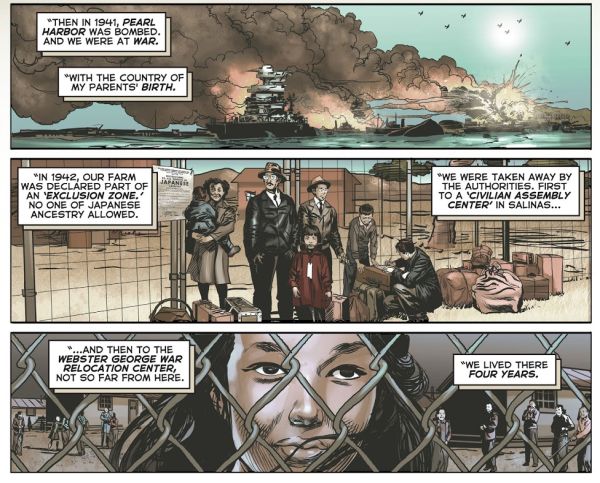 Maisie’s story doesn’t shy away from the ugliest side of this most ugly time, both in the loss of her family’s properties to a white neighbor, and with a distressing matter-of-factness in relating a story of sexual assault. The matter-of-factness helps keep it from feeling exploitative, however – less a lurid tale and more a frank recounting of the sins of the past. This is the other side of the era of the second World War – the side that reminds us that the struggle within a nation is worthy as well, even if it’s far more complex and far less clean cut.

In a lesser comic, Maisie would be here to help Winged Victory with a crucial piece of evidence or would be the highly placed superior keeping the hero in the organization’s good graces. While Maisie does help out in the latter way later on, she has no evidence to give and is, by her own admission, only one voice in the Council. 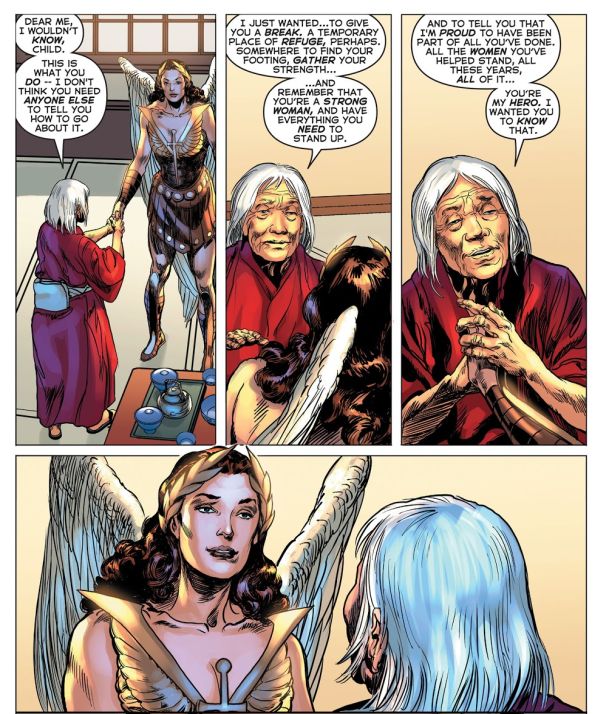 Instead, Maisie just wants to give Winged Victory what she gave so many other women – a safe space. The parallels with Paradise Island, the original safe space for women (at least in intention) feel obvious, and as I went into previously, for Winged Victory, Paradise Island is a place to be found and built. All Maisie does, really, is remind Winged Victory of how strong she really is, in an act of gentle kindness that speaks to the best in the genre.

Having caught her breath and gathered her wits, Winged Victory and her friends head into the final part of this storyline, which will be covered in this very space in a week’s time. See you then!