Zatanna, like so many, believes the key to self-esteem exists outside of herself. She looks for it in workshops, relationships, or books of knowledge, but she does not trust herself enough to believe in herself. In fact, whenever she thinks she has it all figured out, something shifts – causing her to feel unstable and insecure. The cycle of self-doubt begins again. She is in a perpetual state of action and reaction where nothing is solid and nothing is what it seems.

Not as Easy as You Think

Zatanna #2 opens with Zee and Misty driving through traffic in a foggy San Francisco. Gwydion (the formless creature Zatanna summoned to disastrous effect in Zatanna #1), continues its treacherous pursuit. Misty has sought an apprenticeship with Zatanna, who begrudgingly agrees. There’s an obvious mother-daughter dynamic at play here, further indicated by Ryan Sook’s depiction of Zatanna driving a minivan in the opening pages.

Misty rests her head on the car window in the annoyed way teenagers do when they are in the car with their parents, and there’s a bit of teenage angst in her expression as stares into the distance of San Francisco. As they sit in traffic on the Golden Gate Bridge, Zatanna seizes on the opportunity to impart the first lesson to her apprentice: being a superhero is not as easy as you think. The remark denotes a shift in the relationship between Zatanna and Misty from one of the relative strangers to a parent-child dynamic.

Zatanna frequently takes on the role of behaving to others the way she wishes she could act to herself. Like many of us, she finds it easier to care for others than for herself – so she fiercely protects those around her, often throwing herself into dangerous situations, and it’s by protecting and caring for those around her that Zatanna hopes to fix herself.

Issue #2 sees Zatanna imparting several rules to Misty about what it takes to be a superhero. Read another way; these rules are survival tips anyone might find beneficial – perhaps they are bits of advice she wishes she had as a youth. That she so quickly falls into the role of parent, taking on the behavior of providing expertise and discipline to Misty, tells us a lot about Zatanna’s state of mind. It is possible to view these behaviors through the framework of psychoanalytic thought known as transactional analysis.

Eric Berne, a psychiatrist in the 1950s, is the person behind the concept. It’s the basic theory that says our interpersonal relationships can be understood through three ego states known as the parent, adult, and child. Importantly, none of these states are inherently good or bad. The point of transactional analysis is instead to help people understand how our relationships influence how we think about ourselves and capabilities. For example, some people in our lives may cause us to behave more childlike whereas others cause us to take on a more parental type role.

Here’s a closer look at the three ego states of transactional analysis:

Parent: When folks mimic their parents’ model of caregiving or other behaviors.

Adult: When people live their life with reason, logic and objective basis of reality.

Child: When people act or feel similarly to how they did in childhood.

It’s useful to apply this framework to Zatanna because her story arc is nothing if not an examination of her moving between these three-ego states. Her current state of lacking the confidence to perform magic is the ultimate child state, therefore.

Misty’s entry to Zee’s life, however, causes her to take on the role of parent. Feeling responsible for others safety and wellbeing causes us to think about our actions differently. That is not to say that Misty and Zatanna always fall into the role of child/parent. There are times when Misty acts as the adult or parent to Zatanna, and there are moments were they regard one another as equals.

As Zatanna and Misty arrive at Cassandra Craft’s magical oddity and occult shop in this issue , they find it closed. The locked door alarms Zatanna because Craft’s store is never closed. Misty uses her magic to open the door and it’s at this moment that Zatanna relinquishes the role of parent and adult to Misty.

Berne says our self-esteem greatly influences our ego states. For instance, when we believe we are okay, we act in accordance with that belief.

I’m not okay, but you’re okay.

We’re both not okay.

I’m not okay, but you are okay.

Feeling “okay” means we don’t feel threatened; that we feel confident in our ability to make rational decisions using things like logic and objective reasoning. Being okay doesn’t mean we have to be ‘great’ – it merely means we are capable of functioning authentically. Being ‘okay’ is closely aligned with the adult ego state. At this point in Zee’s story, she does not feel okay. Her lack of self-esteem creates obstacles for her and these are not easy for her to overcome.

However, when Misty enters the picture, it forces her ego state to change. When someone we are around is in a state of being ‘not okay,’ we try our best to act ‘okay’ ourselves to help them. This relationship dynamic mimics that of a parent and child. There are, however, other times when both parties in a relationship are not okay. Imagine two children near a stove without parental supervision – things may not go poorly, but the risk is undoubtedly higher they will! In this way we can think about the influence Misty and Zatanna have over one another, each fluctuating between states of being okay and not okay. It’s messy and imperfect, but they are learning about themselves even if it proves difficult and challenging. 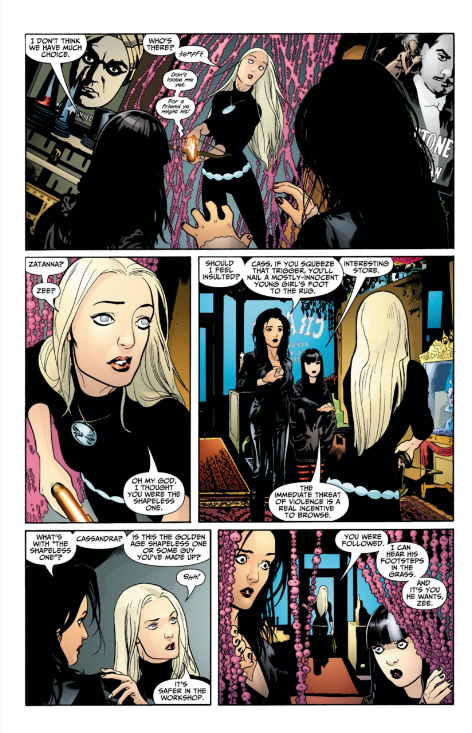 Cassandra Craft, the store owner and psychic, knows that the formless creature is following the pair. Zatanna visits Craft expecting to find an answer, but instead,she is left with more questions and concerns, to which Craft responds: “That’s the point, you can’t narrow the shapeless one down, he can be anything.”

The above statement proves true for the shapeless one, but it is also true for how we perceive and think of ourselves. Our nature as humans is to be in a relatively constant state of change. Change can make people feel out of control and so to avoid this feeling… we resist change. In fact, pushing back against change often increases inner (and external) turmoil. In psychology, our ability to respond to change is called resilience. Resilience is the lesson that both Zatanna and Misty are on the path to learning.

Craft urges refuge in a deeper section of the store as they work out what’s going on and how to fight back. She also has trouble understanding how Zatanna can take care of Misty when she can barely take care of herself, in another allusion to the burgeoning mother-daughter dynamic between Zatanna and Misty. This relationship will be more critical as the saga of the Seven Soldiers of Victory continues.

If you can’t keep it down…

It becomes clear that Zatanna will have to confront Gwydion in Craft’s store. Called to action, Zatanna ignores the fact that she lacks the ability to perform magic and she instead relies on her other skills. While doing so, she offers Misty up another bit of magical advice: “If you can’t keep it down, don’t bring it up.”

This advice is a message about control. Zatanna feels most comfortable in environments where she is in control of the variables. You might say the magician acts as the parent, controlling every element of what the audience sees and hears. Engaging in this kind of misdirection is more comfortable for Zatanna than being her authentic, adult self.

But when someone is at risk of seeing the real Zatanna, complete with imperfections, she loses her confidence. Could this be why she shatters the mirror in Craft’s store? Could it be an indication she is not ready to face her true herself? Perhaps Zatanna is only capable at this moment of continuing to believe in the illusion she has created for herself. She wears the top hat, not because she has to for anyone else but because she needs it for herself.

Zatanna has misdirected the reader. She convinces us she has broken the mirror to trap the shapeless creature. While there may be elements of truth to this, it’s likely not the full story. She still fears losing control of her image and everything she believes she needs to be to others. Zatanna continues to believe she is at risk of disappointing those living and dead who love her, but the only real danger she faces is in her disappointing herself.

She can’t keep it down, so she’s not bringing it up.

One thought on “Seven Critics of Victory: Zatanna #2”