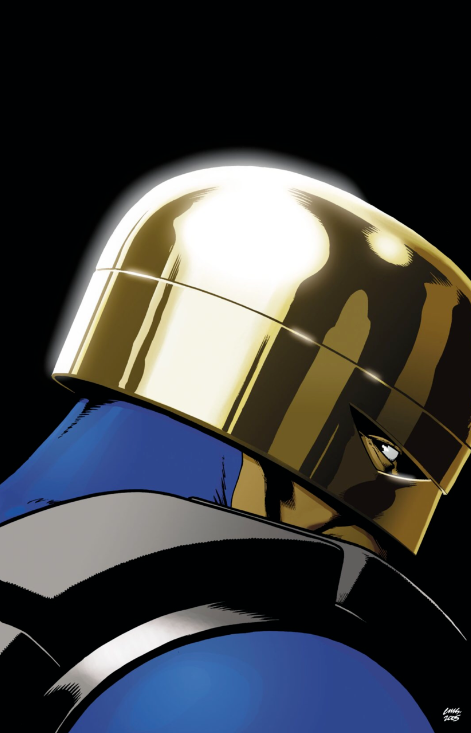 In many ways, The Guardian mini-series is a story about power. When exploring the first issue, we tackled the way power is expressed through economics and class. Now, as we tackle The Guardian #2, I want to zoom out a little bit and talk about the way this comic posits that power works in a broader sense. In simple terms, Morrison’s story here posits that power resides in the stories we tell one another. The stories we believe in most govern our reality, regardless of whether or not they are true.

When Jake, the eponymous Guardian, confronts No-Beard on a commandeered subway train in The Guardian #2, No-Beard describes the subway pirates as “the failures and the %$%#-ups you don’t like to think about. The crazy, lost and homeless.” On the surface world, a land dominated by people of fabulous means and traditionally respected knowledge such as Ed Starguard, No-Beard and his crew are powerless. However, because power is just as much about what an individual projects as it is about how they are perceived, No-Beard finds a way to reclaim power by building a new dominion underground. As he puts it, “imagine if they just turned their backs on a world that’s turned its back on them?” Rather than be considered outcasts in one system, the subway pirates leave that society behind to build their own, just under the feet of those who scorned them.

The subway pirates certainly command Jake’s respect. Even after he rescues his partner from All-Beard’s clutches in this issue, he says “there are rules down here. Laws we don’t understand.” He grants them a level of authority over the underground that, in effect, cedes some of his own ability to control what goes on around him.

That said, it’s not like Jake had much power to cede. As we discussed previously, Jake is a character who is introduced to us as powerless. At one point, he had the authority a police officer projects. However, after a tragic mistake, he’s stripped of that formal power. And despite his incredible physique and physical prowess, Jake no longer sees himself as strong and thus, simply isn’t. But then he’s offered the role of Guardian. 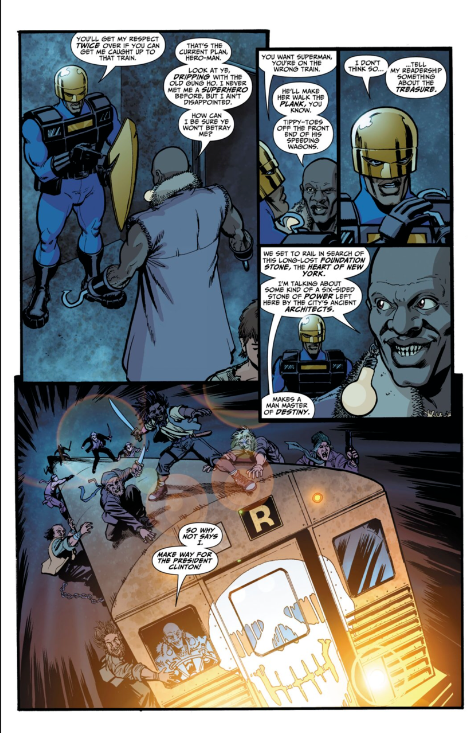 While the Guardian costume doesn’t grant Jake superpowers, it does grant him a superheroic amount of confidence. He projects a somewhat hilarious amount of authority as he screams “reporter! Press, for God’s sake!” as he is dragged through the Manhattan underground on a chain dangling from the back of No-Beard’s train. Jake’s new job doesn’t mean anything to those he’s confronting here, but it gives him the necessary sense of duty and self-worth to pull off a physical feat that in all probability should kill him. Like Bruce Wayne says he must become a bat, wresting power back from a world that took it away from him, Jake becomes the Guardian, having been bequeathed a second chance at power and authority by Ed Starguard.

That said, while power can do great things for people, The Guardian #2 posits that the pursuit of such an inherently subjective concept is ultimately futile. The conflict between the subway pirates All-Beard and No-Beard is all-consuming. Their pursuit of a “six-sided god machine” that controls destiny kills their respective crews and mortally irradiates No-Beard (All-Beard’s fate is left unresolved, but one presumes he died by No-Beard’s hand off-panel). And even with the god machine, No-Beard is unable to take control over the universe at large. All his pursuit ultimately did was kill his crew and melt most of his body. As the issue concludes, the narrator reduces the once-powerful subway pirate back down to nothing. He’s “only some old homeless guy. Sick and soon to die.”

Similarly, Jake pursues and succeeds in reaching his goal — saving his partner, Carla, from All-Beard’s clutches. However, during the single-minded pursuit, Carla’s father Larry, who was stabbed in the previous issue, bled to death on a subway platform. He too, can’t control the universe and save everyone he loves.

Like No-Beard, Jake began this story in a position of powerlessness, but rediscovered a sense of authority by embracing a new role. However, unlike No-Beard, who at least maintains a sort of independence during his rise to and fall from grace, Jake had his new identity bequeathed upon him. As the Guardian and really, even as a policeman, Jake’s power has been granted by and used in the service of others—a government and a private corporation controlled by rich white men. It’s enough to make one wonder whether, at any point in his life, Jake has truly had control.

Alexander Lu is an Editor for The Beat, and the new soul of modern-day New York City. He can be found on twitter here!

One thought on “Seven Critics of Victory: Manhattan Guardian #2”