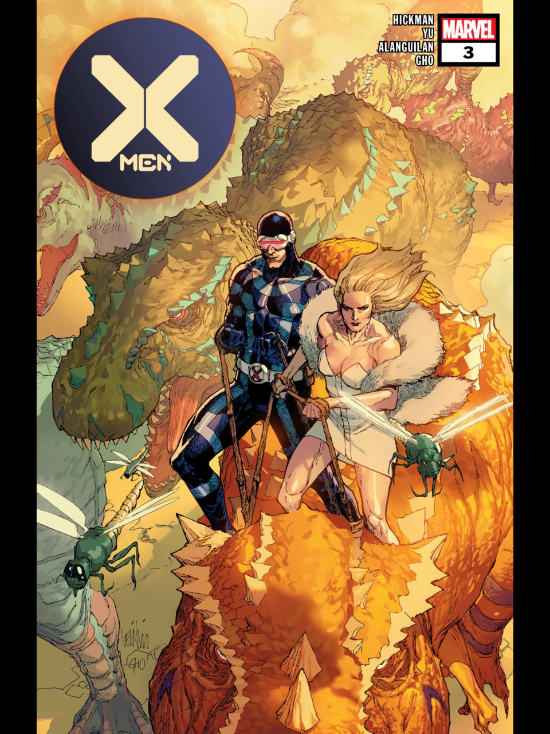 This is a bad X-Men comic, so anything I have to say about it is tempered by the fact that it’s not a very good issue. Tempered, I say! It seems like the intention for each issue of X-Men is that it plays out a random event in time happening to mutants. Here, this takes the form of a group of four elderly women who are able to travel through Krakoan gates, nullify mutant powers, and trap people in some kind of green goo. After arriving in the Savage Land with the intention of harvesting some plants there for their own mysterious ends, they beat the crap out of Cyclops and Sebastian Shaw before merrily sauntering off back where they came from.

One thing is clear by the end of the issue: the X-Men are going to have to fight some 70 year old women twice.

There’s a few efforts thrown in to discuss ageism – the idea that these women shouldn’t be underestimated just because they’re older, and prone to bickering – and all three of the mutants who confront them are promptly shown up and taught a lesson by their elders. But really, it’s a very silly concept, and it’s going to add another layer into perhaps the least interesting part of this whole new world for the X-Men: their world, itself, Krakoa. We’ve had to deal with a lot of endless exposition about Krakoa thoughout Hickman’s tenure with the mutants, and here we get the added suggestion that these four botanists may eventually be able to turn Krakoa onto their side.

Following last issue’s weird island sex thing and the constant talk about Krakoa’s boring past which kept cropping up in HoXPoX, clearly readers are going to have to be incredibly tolerant of a lot of dull chatter about the island as this era of X-Men continues. We’re also going to have to deal with more “banter” between Emma Frost and Jean Grey, which, based on this issue, is something to be dreaded.

Emma plays a strange role in this issue, flanked by two of the men who have most defined her life and times. On the one side is Cyclops, her long-term partner who apparently has ditched her completely for Jean by this point. On the other hand is Sebastian Shaw, the Black King to her White Queen. Both men have asserted power over her in the past which for the most part was assumed power Emma was happy to pretend they actually had. The problem is that by always trying to be the power behind the power, she becomes essentially a bystander to someone else and their ambitions. It was true for her time in the Hellfire Club and arguably true when she was co-leading the X-Men with Scott. 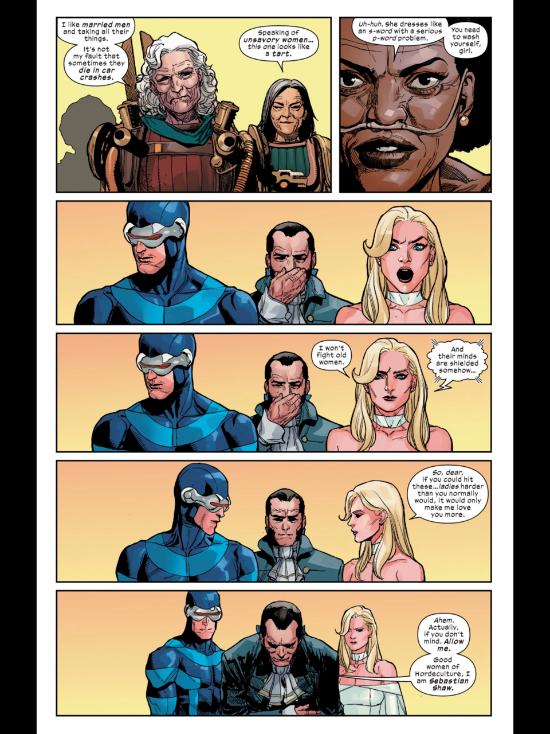 Here, we get to see a quick repeat of that, as the old women show Emma how it’s actually done. Shaw tries to step in first, offering a long and patronising speech which ultimate comes down to “take some plants, old women, and we’ll let you go without getting hurt”. He spends the whole time ensuring he asserts his own dominance – something which doesn’t seem particularly necessary given his opponents at the time – in a mirror of his approach at the Hellfire Club. His power is all about his assertiveness, and it’s useless in the face of four women who don’t care less about who he is or what he claims to represent. They kick his face in.

That prompts Cyclops to step in, as the wise old tactician and leader. He knocks them all offguard with his offensive strength without a single worry. It’s only when one of the women feigns an injury that they can take advantage of him and, again, kick his face in. It’s one thing to fight a group of evil mutants who have some code of honour, but it’s very different when you have to fight a bunch of women who have been training their whole lives to achieve something specific. Cyclops gets in the way, they outmanoeuvre him, and take him out.

That leaves Emma, stood by herself, the true power. Yet she’s shut herself out by turning to diamond form, essentially taking away her strongest ability to make sure she’s safe. A few moments ago she was standing behind two very powerful mutants, letting them do all the dirty work to ensure she got the result she wanted. With them taken out, she’s by herself, and she stands there whilst the women tell her their goals. She stands there whilst the women leave. And then she goes to tell the tale to the Quiet Council, so somebody else can do something about it. There’s something fascinating there. Emma’s disinterest in actively engaging shows that she’s just like Shaw in one sense: her power is all potential.

That’s a lot of power to have, but will she ever be able to harness it into something active? Does she even want to?