Welcome to Spider-Man Roulette! Shelfdust’s Patreon backers were asked to pick a number at random – and now I’m going to write about whichever corresponding issue of “Amazing Spider-Man” they chose! This issue was picked by Patreon backers Kieran Shiach and Helena Hart, who chose number 242 for the roulette!

Issue #242 of Spider-Man features a surprise fight scene halfway through, where the character is caught out daydreaming when suddenly he’s attacked by a mystery villain… which turns out to be an android created by the Mad Thinker as part of his latest experiment. Having started with some character-drama for Peter Parker, the issue takes a random swerve across into a fight scene before then heading back to the character-drama at the end.

Being a superhero comic, there is a feeling that there has to be a fight scene in each issue. It’s a strange demand to think about: that fights must start up every ten pages by editorial mandate, and that readers can’t go that length of time without getting itchy. It’s something that still exists in superhero comics now, with it being unusual for any issue to conclude without somebody getting punched at least once. It speaks to the inherent violence of the genre, where heroes and villains must get into a bit of physical violence. Even with a non-violent villain, you’re unlikely to reach the end without the hero smacking them round at least once. It’s why I think this issue sets up Mad Thinker to be a brilliant alternative for Spider-Man, and why it’s a shame that the promise in this issue doesn’t seem to have carried acoss into future stories featuring the characters.

Which is all to say: I’d much rather write about the Mad Thinker stuff in this storyline than the bit where Spider-Man seems like he’s about to get pulled into having a threesome. The intensely of-his-time Lance Bannon character sweeps Peter Parker away in his car and then cries over a drink about how his girlfriend is too free-spirited and keeps trying to make him jealous. That girlfriend, it turns out, is a girl who has apparently been trying to hook up with Pete for several issues now, despite Peter’s relative lack of interest in the idea. Peter tries to cut this storyline off before it can go any further, but his lack of authority leads the girl, Amy, to set him up on a date with her. She then surprises him early before the date is meant to happen, starts kissing him, Mary-Jane makes her return… it’s a big trash soap opera thing.

Mary Jane does wear a neat little cravat, though, so points there.

Let’s get back to the Mad Thinker. His plot against Spider-Man takes up the middle of the issue, where he sends an android after Spider-Man. He does the whole thing remotely, enabling him to have a fight scene against the hero without ever actually leaving his jail cell once. The fight ends and Spider-Man has no idea why a random robot just attacked him, or whether there’ll be more. It’s a perfect idea to help keep Spider-Man on hie toes, anxious, and alert. He’s trying to get involved in a bizarre love triangle and then BAM! he’s fighting a robot for no apparent reason. It gives Spider-Man and the Mad Thinker a lot to work with, and it’s pulled off startlingly well here.

It makes you wonder why a character like the Mad Thinker can’t quite make that jump across to the next level. You’re probably not going to see him show up in a Spider-Man video game or movie, after all: he doesn’t have that star power or recognition with readers that would make him anything more than a C-tier opponent. It’s a shame because everything needed is here: he has a distinct personality and approaches Spider-Man differently to the rest of the rogue’s gallery; and there are just enough small touches to help round out the character and make them unique and interesting. The idea that when he is put in his jail cell he just sits down and thinks is interesting by itself: the idea that he’s actually projecting his consciousness into his secret lab is absolutely brilliant. 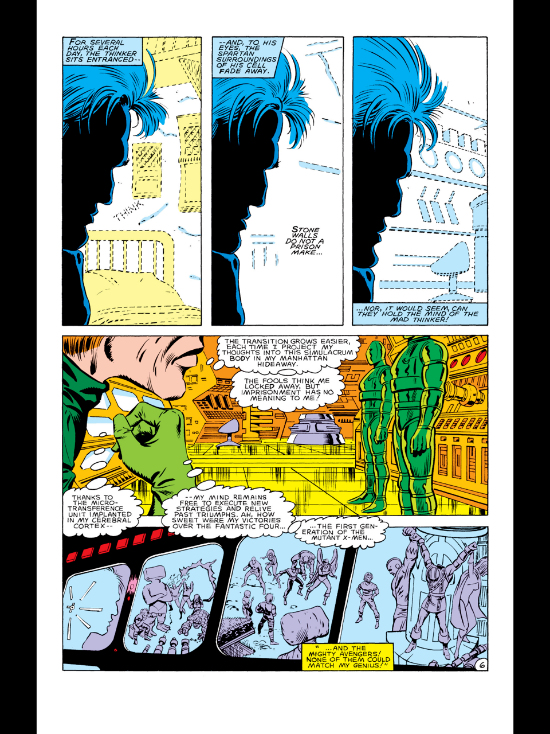 Here is a villain who doesn’t take any time off: a character who can get sent off to The Raft without it harming his effectiveness as an adversary. In fact, there’s an argument that it makes him one of the most effective villains there is. Every time he does get beaten, he heads back to his cell and crosses off a working draft before settling right back to the next one. Spider-Man remains completely oblivious to the fact that he’s a test subject for the Thinker’s various experiments, and you have a villain who can be taken off the board without actually ever being taken off the board. It’s hugely effective as a concept, and it’s a shame that it’s not something I think I’ve seen used particularly in the following years.

I wonder if the issue is that Spider-Man has so many flashy (but useless – hi Electro) villains who take the spotlight instead. It could be that a more human and grounded character like the Mad Thinker simply gets lost amongst all the superpowers and grandstanding, and that’s what holds him back from reaching that higher level and becoming more of a household name. The idea that he’s purposely under the radar gets lost and he actually then falls under the radar: he’s too effective at being low-key for his own good, in other words. In a comic-book city which thrives on drama and story – there’s a reason why The Daily Bugle continues ever-onwards – he simply doesn’t merit the page space that a man in a giant octopus outfit could have instead.

I mean, arguably Thinker has actually been overtaken by one of his own androids – Andy, who shows up a a good-natured mute in Dan Slott’s tenure writing She-Hulk. There’s a point at which a character stops being an underrated threat and simply becomes forgotten about, and it feels like the Mad Thinker is one of those characters who has just fallen by the wayside as years have moved on. Maybe he should get his skin coated in stone or something, really play into the gimmick more. It’s a shame, because there are any number of similar characters who have had a one-off spotlight issue like this one which really highlights their ability – but then get forgotten as time moves on.

One thought on “Amazing Spider-Man #242: Thinking About The Mad Thinker”