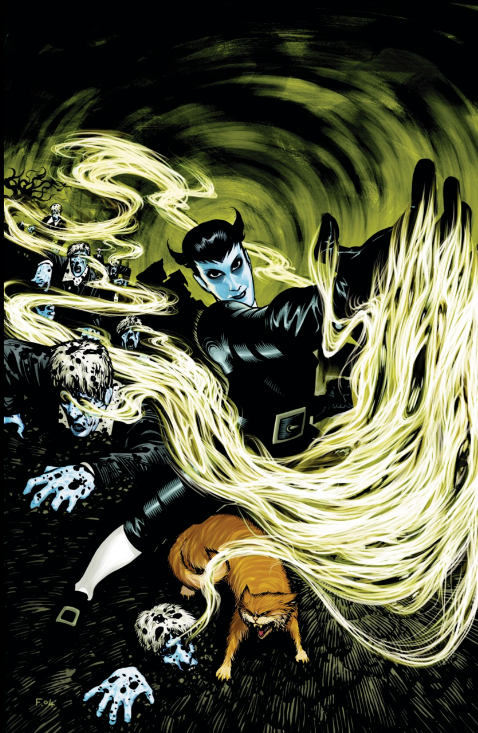 There’s a grand, unfortunate irony to Grant Morrison’s career: much of his most beloved work relies on DC Comics’ deep, complicated legacy, but the publisher largely refuses to play with any of the toys that Morrison adds to its shared toy box. Morrison helped lay the groundwork for the Vertigo imprint with their gonzo, self-aware work on Doom Patrol and Animal Man, perfected the blockbuster JLA formula, reconciled the many contradictory facets of Batman, and added or reinvented innumerable characters through projects like The Multiversity, yet few if any creators ever pick up Morrison’s contributions once they wrap up a series. If it weren’t for Damian Wayne’s ongoing presence, it’d be hard to point definitively to anything in the current DC Universe that owes its origins to Morrison. Perhaps the most obvious — and most disappointing — example of DC’s unwillingness to say “Yes, and…” to Morrison’s boundless creativity is Seven Soldiers, the 2005-2006 “metaseries” composed of two bookend issues and seven interrelated-yet-standalone mini-series.

Ambitious in scope and in format, Seven Soldiers began, according to a now-deleted interview on Comicon.com, as a DC analogue to Marvel’s then-juggernaut Ultimates series, with Morrison telling interviewer Jennifer Contino that, “Guardian was in from the start as my Captain America guy, Mister Miracle was Thor, the Demon was the Hulk, Zatanna was the Scarlet Witch and so on…” Little of that take seems to have made it into the finished product, as Seven Soldiers instead tells the tale of seven heroes who unknowingly unite against the Sheeda, an invading race of vaguely arachnid-themed science-and-magic wielders who seek to harvest the Earth. Each miniseries strikes a distinct vibe, from pulpy sci-fi to swords-and-sorcery adventure to gothic horror, and each member of the titular “team” fulfills their role in the war without much knowledge of the larger cogs turning around them.

Of course, every essay you read throughout this project will probably say some variation of the above — we’re here to talk about the creepy lil’ blue boy known as Klarion. Created by Jack Kirby in the pages of The Demon, Klarion spent decades as a sort of precursor to Marvel’s impish Kid Loki: a not-truly-malevolent, not-quite-child with the power to mess things up right good. Prior to Seven Soldiers, Klarion’s biggest role came during the Young Justice: Sins of Youth event, where he turned DC’s young heroes old and its old heroes young. Like a goth, Puritan version of Mister Mxyzptlk, Klarion was on call to cause mischief and mayhem, but possessed little character depth of his own. Morrison’s first task, then, was to humanize the Witch Boy.

In Klarion #1, illustrated by Frazer Irving — and worry not, we will be talking about Irving’s vast contributions to the book during this essay series — Morrison soft-reboots Klarion and his origins. Once hailing from the vaguely defined “Witch-World,” Klarion now calls Limbo Town home, residing there alongside the other descendents of the fabled Roanoke colony (Google it — this essay is already running long). Klarion strains under the yoke of Puritan expectations, but his peers look more like a Swedish Death Metal band than a sanitized Thanksgiving portrait. “What a horrible, horrible world,” Klarion mutters, lamenting the life cycle of Limbo Town residents: toil until death, only to be resurrected as part of a slave caste that continues to serve the colony in the afterlife. 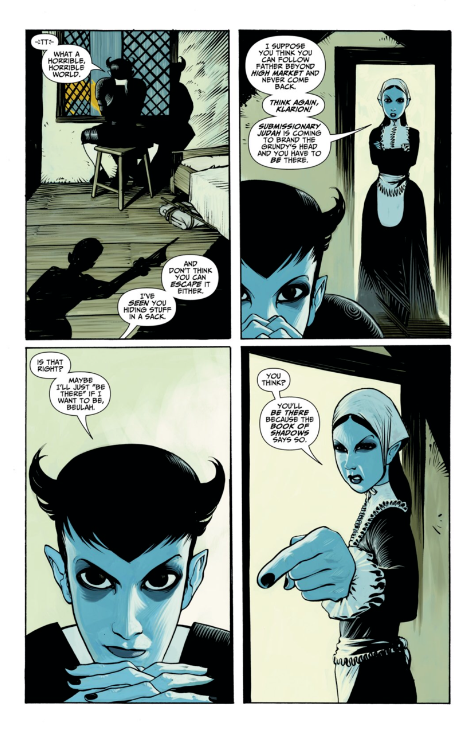 The first issue of Klarion is actually a perfect microcosm of how DC typically treats Morrison’s boldest ideas. This iteration of Klarion, like his Limbo Town neighbors, has blue skin, a trait that has now stuck to the formerly pale magic-wielder. But while this superficial alteration outlived Morrison’s run, the twist on Solomon Grundy did not. Longtime DC Comics bad guy Solomon Grundy, a super-strong, occasionally sympathetic zombie with numerous origin stories, is here revealed to be one of many such revived hulks: “For it is the fate of us all to one day be Grundies like this and toil in our children’s gardens,” preaches Submissionary Judah, the imposing religious leader who enforces Limbo Town’s rigid doctrines.

Dear reader, if you think this version of the Grundies has ever again been mentioned in the pages of a DC Comics publication, think again—Limbo Town reentered limbo as soon as Seven Soldiers ended. This is true of many of the changes brought on by Seven Soldiers, which resulted in little more than characters like Manhattan Guardian and Bulleteer occasionally appearing in group shots during crossover events.

Perhaps the biggest surprise of Klarion #1, beyond the Grundy twist, is how relatively straightforward it is. Klarion offers few hints at his Puckish nature, instead embodying a fairly archetypal (albeit significantly more goth) Hero’s Journey protagonist. More Eeyore than Anansi, Klarion yearns to escape the confines of his small town and follow in the footsteps of his father, who abandoned Limbo Town long before the series began. Klarion’s sister offers several stern reminders that Limbo Town residents have a responsibility to stay in their lane, while an ill-fated neighbor lends a more sympathetic ear to Klarion’s heretical questioning of Submissionary Judah’s sermons.

Along the way, Klarion’s most faithful companion is his cat familiar Teekl; all Limbo Town residents have an animal familiar, with Submissionary Judah’s in particular looking much more sinister than Klarion’s feline friend. The residents of Limbo Town trade with strangers from outside the colony confines, and the first issue ends with Klarion venturing beyond this boundary, only to immediately stumble across a scene of carnage — and the terrifying chimera that caused it.

In just one issue — technically an event crossover, complete with Sheeda cameo — Morrison and Irving fleshed out a full back-story, supporting cast, and motivation for a character who previously existed solely to annoy other DC characters. That motivation may be oddly standard for Morrison, but it’s bolstered by one of their recurring themes: faith in people and ideas, but not in institutions. Klarion’s chaotic alignment makes sense when you consider his puritanical upbringing, and even knowing the lil’ shit he’s destined to become — perhaps even a traitorous lil’ shit, over the course of Seven Soldiers — it’s hard not to root for the blue boy and his cat. If they survive their encounter with the Horigal, that is…

Steve Foxe is the comics editor for Paste, writing every day about any and all kinds of comics, whilst never forgetting his twin loves of Morrison and Moore. Check his byline here for his most recent pieces, and find him on Twitter here!

One thought on “Seven Critics of Victory: Steve Foxe on Klarion #1”