Editor’s note: this piece was originally written in 2018. 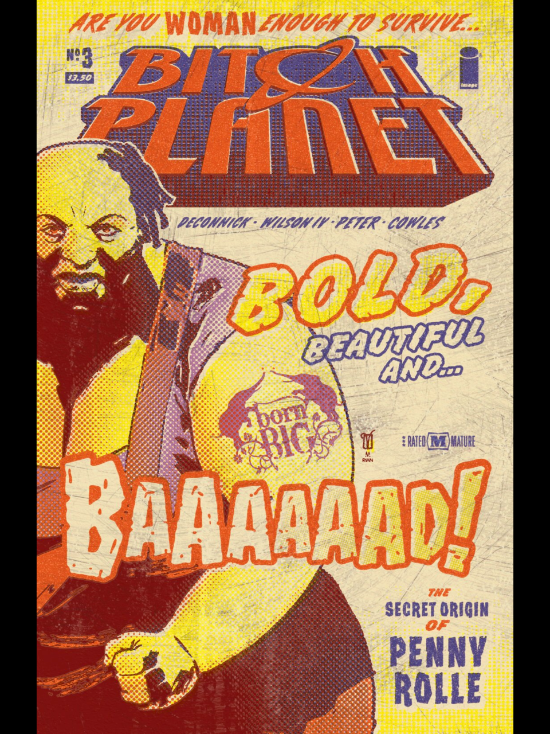 What a radical way to talk about a body — especially a fat one, especially in a diet culture that is hyper-obsessed with thinness. There are few moments in pop culture, comics included, where fat women are given the ability to not only own their fatness, but revel in it. In Bitch Planet issue #3, released Feb. 18, 2015, 22 year-old Penny Rolle does exactly that.

Although I cannot share in all of Penny’s experiences, “Too Big to Fail” has still stuck with me ever since I read it for the first time on that fateful NCBD. Penny Rolle is a character who faces intersecting discrimination as a fat, black woman who was forced into foster care when her family was systematically murdered by the same government that imprisons her as an adult. She is treated like an animal. She is also, arguably, the most powerful woman in the Bitch Planet universe. And despite her entire personhood being deemed “offensive” enough to land her in prison alongside hundreds of other women, she doesn’t buy into the ideals the government is imposing.

Penny Rolle likes her body as-is. This comes as a revelation at the end of Bitch Planet #3 — and takes root in the history of the fat acceptance movement, which was started by black women in the 1960s.

To actually understand the ending of Bitch Planet #3, I had to read it a second time. Then a third. Then a fourth. It was so shocking to me, a fat, white woman who hated her body, that I couldn’t even process what had happened in those final panels. But the second, third, and fourth time reading, the pages stayed the same. When the Fathers seek to show Penny an “ideal” version of herself so she will be motivated to lose weight and change her appearance, she sees herself in their screens. Exactly as she is. They can’t believe it and frankly, neither could I. 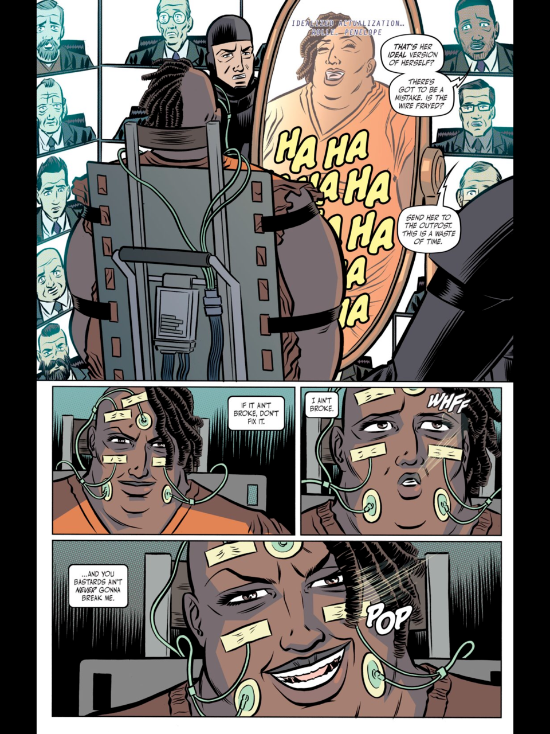 At the tail end of 2012, I barely crawled out of an emotionally and psychologically abusive relationship with my personhood intact. My ex-partner, whom I met online, was fond of calling me “bebe whale” even while insisting that my fat body was attractive. After we met in person, they kept up the nickname but voiced different opinions on my body. They told me that if I lost weight, we’d have better sex. That if I lost weight, I’d be prettier. Even after I realized they were abusive and left, these comments significantly set back what little progress I’d made toward accepting myself.

By the start of 2015, my life was wildly different from how it was when I left that person. But still, the thing I couldn’t shake (and hadn’t been able to shake my whole life) was the way it felt to look in the mirror and see a fatter version of myself than the one that existed in my head.

Penny Rolle’s unapologetic appreciation of her body was a gut-punch that I never saw coming. It’s one that holds the same weight now, even after I’ve built a career out of learning to embrace my body, out of upholding the voices of other fat people and challenging everyone to change the way they talk about bodies.

In the process of dismantling my own ideas about diet culture, here’s what I’ve learned: fatness is offensive because, as Michael Hobbes put it in his Highline piece about mistreatment of fat bodies in the medical field (and beyond), “Obesity, we are told, is a personal failing that strains our health care system, shrinks our GDP and saps our military strength. It is also an excuse to bully fat people in one sentence and then inform them in the next that you are doing it for their own good. That’s why the fear of becoming fat, or staying that way, drives Americans to spend more on dieting every year than we spend on video games or movies.”

Those who rail against fatness in comments sections, on social media, and even in real life always claim to be looking out for people’s health. But here’s the thing: health is not a prerequisite for respect, nor is it a marker for whether or not people are deserving of being treated as people. Fat people aren’t hated because we’re unhealthy.

We’re hated because we are “aesthetically offensive,” as one of the Fathers in Bitch Planet issue #3 puts it. Non-white fat people are hated even more for daring to take up so much space in their bodies. There is an incredible series at Wear Your Voice, #BodyPositivityInColor, that explores these intersections. I highly suggest you read it, no matter who you are.

Samantha Puc is a writer and critic with bylines at The Beat, Rogues Portal and Bustle, amongst many others. She can be found on Twitter here, and you can visit her website here!