The age of the pop culture revival has its fears as well as its hopes; the chance that something that transcends is minimal next to the chance it merely entertains (and makes money) and the fear that it might be terrible and drag down your memories of the whole enterprise as a result. Two contemporaries of 90s TV, Twin Peaks and The X-Files, have returned to TV screens, and you could hardly find two more fitting poles for the debate; Twin Peaks somehow surpassed the original (or at least put a new spin on it) and the only episode of the revived X-Files I have time for is the one that was about how things are never as good as you remember.

So when I heard about the return of Astro City a few years back, I was filled with a little dread, since if anything embodies the notion of a comic that is beloved, it’s Astro City – set in its own universe that nonetheless echoes all other superhero universes, forms out of the consensus formed from several decades of hammering away at the genre.

I needn’t have worried. It’s as good as it’s ever been.

The first issue of the revived Astro City features the return of the creative team that started the series and defined it; Kurt Busiek behind the writer’s keyboard, with Brent Anderson providing layouts and line art and Alex Sinclair on color art, and Alex Ross on covers. Ross’ cover for issue #1 (cover date of August 2013) is a perfect fit for the content and tone of the book, the blackness of void giving way for a burst of superheroic color both familiar (it’s Samaritan!) and unfamiliar (it’s… American Chibi?) It casts us in the form of someone being welcomed into this world… 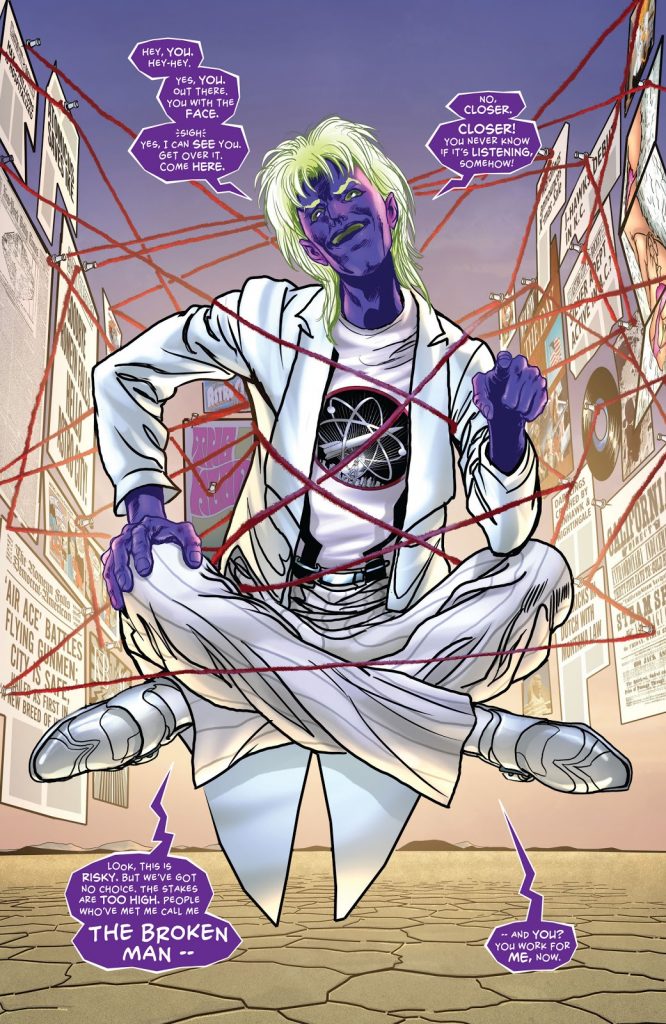 … which, considering the first page, is apt.

If the front cover is the warm nostalgic familiarity Alex Ross excels at, the interior showcases Brent Anderson’s skills as well as the talent of Alex Sinclair and the lettering team at Comicraft (John G Roshell and Jimmy Betancourt, this time around) as they throw us in the deep end. Everything about the Broken Man needed to look like an Astro City character without being a familiar Astro City character, and the art team along with the lettering team nail this first page.

Astro City deals in archetypes more than analogues or “supposed to be” characters – Samaritan isn’t a stand-in for Superman so much as meant to evoke the idea of Superman, the embodiment of everything that “flying hero with cape” embodies. Not a mirror so much as a rhyme. What the Broken Man is, as made immediately apparent, is the metafictional superhero – the one that talks to the reader, encompassing a broad range from Deadpool to Harley Quinn to Mr. Mxyzptlyk to the works of Grant Morrison, a writer I’m convinced is at least partially make-believe.

I’m not always a fan of metafictional characters in comic books; done poorly, all they do is serve to remind me that I spent money on something that’s not real and doesn’t really matter. But the Broken Man works, because he immediately is a sign that there’s more going on with this revival than just “remember Astro City? It was great, right?” A long-term story’s being told – one that relies on an eager reader to put clues together with string and come up with theories, the kind of storytelling that excels in the age of Jonathan Hickman and James Roberts and other “everything’s connected” comics, where a joke can have a five year long payoff.

The Broken Man’s conspiracy theorizing also works as an introduction to one of the major themes of Astro City, since those he wishes to recruit as his agents have to be the kind of characters you don’t immediately notice – the people in the background of a superhero comic that are Astro City’s bread and butter. A love interest that was around in a b-list series for a few issues some decades ago, or a lawyer who’s had to argue the merits of the ‘evil clone’ defense – supporting characters in any other comic, but in Astro City, everyone is the hero of their own story. 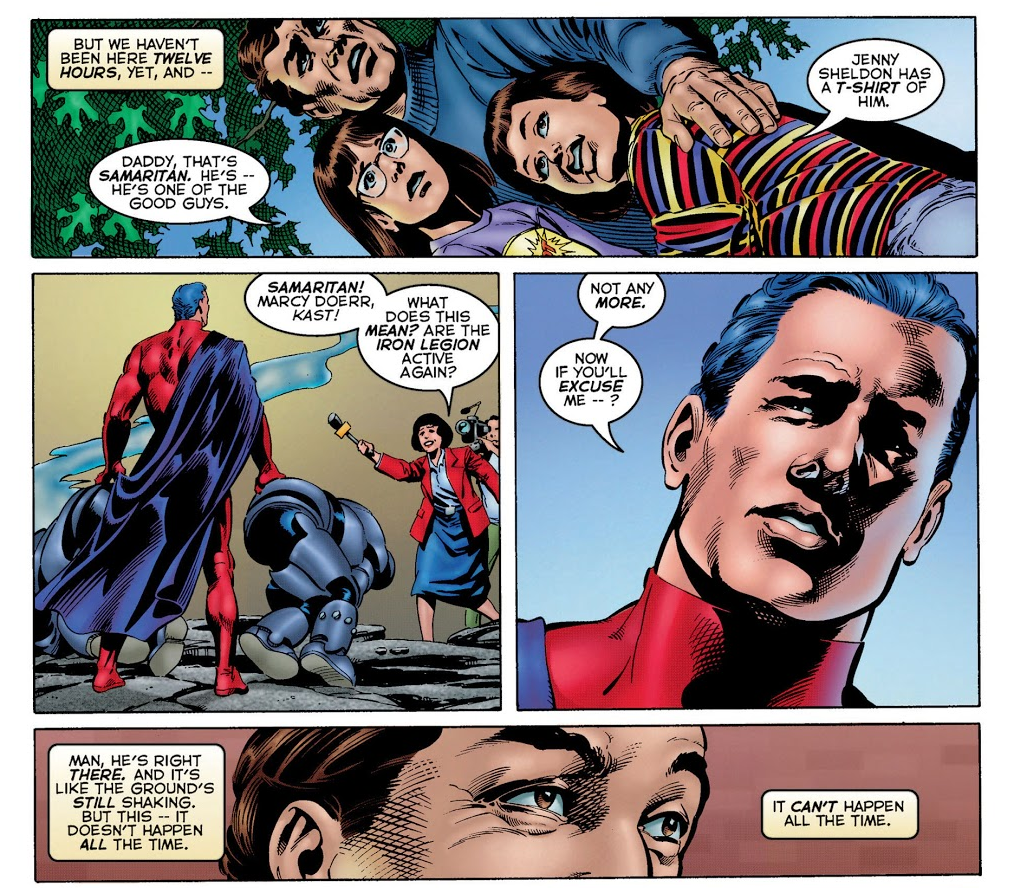 Another of Astro City’s conceits is that it takes place in pseudo-real-time; the story that is being referenced here did, in fact, take place over a decade and a half prior. (In Astro City volume 2, issue #1 from 1996, to be precise.) There’s a lot of debate as to whether superhero universes should be in real-time or keep to their sliding timeline; the argument in favor of the sliding timeline is that it lets characters stay around without needing explanations as to why they’re not aging, which comes in handy when you suddenly, say, find a use for Squirrel Girl in a series aimed at young girls and don’t necessarily want to explain why she’s not forty-one years old.

But as Jack Kirby might say, the “omni-grass” is greener on the other side of the “source-fence – that separates the real from the unreal!!” – and Astro City embodies the possibilities of the other model, a theme it returns to again and again throughout the series. Times do change; iconic roles do get passed down, or new ones arise; a new generation doesn’t need to look exactly like the old generation, and it’s okay to get a little older and a little wiser.

As pleasant as an introduction (or reminder) of those conceits that issue #1 serves as, issue #2 is where the “unseen supporting cast” notion finds new and fruitful ground, as Astro City speeds into one of its very best storylines, starting with a brilliant premise. All in a week’s time. See you around!

One thought on “A Year in the Big City: Astro City #1”