Following the million-copy success of Spawn #1, Todd McFarlane’s creator-owned superhero, you have to wonder how issue #2 will sustain or squander that momentum. The worry of a sophomore slump is very real – especially now McFarlane is working with no editorial oversight, which implies complete creative freedom but also leaves room for complete and absolute overindulgence. And so we open to the very first page, and see… Violator. McFarlane has just jumped from the biggest publisher in the industry to set up his own company and imprint; he’s making a comic about a character he’s been thinking about since he was a child; and he has no boundaries or limits to what he’s allowed to do or how to do it. Having created a space for himself and built up one of the hottest streaks in the western comics industry to date… Violator is his choice.

Violator is a short, squat man with wiry white hair that flies out in scraggly directions, his clothes torn and shoddy, and his trousers perpetually falling down. He’s got a partial mask painted onto his face which makes him look something like Mister Sinister, and he wanders around in an alleyway without any shoes on. Further, Violator is supremely confident in himself, talking about all his amazing powers and abilities, and all the incredible things he’s going to do to his victims. Boasting to a cat – his only audience – he talks about “making fillets outta his lungs”, “soft boil his eyeballs”, and the like. He’s aware of his own self-bravado, but that doesn’t stop him from continuing on endlessly throughout the issue. This is the first villain Spawn will face, and he’s going to be around for a very long time onwards. 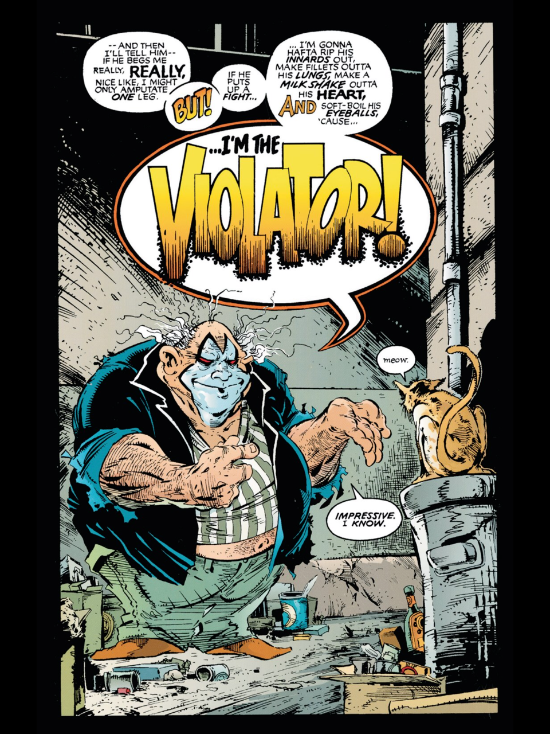 You can see the idea of the character immediately: he’s this puffed-up, self important idiot who thinks he’s more powerful than he really is. This big-talker has no ability to back up his bluster, and he’s only threatening if somebody takes any of his nonsense at face-value, which obviously is impossible to do given his outward, clownish appearance, face paint and all. His role is to suck the life out of his enemies without ever killing them – wearing them down into nothing so they become a compliant cog in the system for his “boss”, identity unknown as the issue begins. Let’s just go ahead and take that leap: he’s Marvel comics.

To be perhaps uncharitable – or maybe this is just testament to McFarlane’s cartooning here – Violator even looks somewhat like Tom DeFalco, McFarlane’s direct editor at Marvel during the final months of his time working on Spider-Man. As pointed out to me by C.P. Hoffman, there is a visual similarity at work which turns Violator from character to caricature, to an extent. When he first meets Spawn in this second issue, he initially acts friendly towards him before quickly turning to small insults and catty comments. He acts like a buddy even as he’s demeaning Spawn, saying how tired he looks and how ugly he is. He’s putting down Spawn as a compliment, so assured in his own superiority that it doesn’t matter when McFarlane depicts the two in a splash, page, Spawn towering over the verbose Violator. Putting aside the twist at the end of the issue, you can see this as absolute parody of the editorial masters McFarlane had to work with at Marvel: all talk, no trouser. Literally, as he has to keep zipping himself back up.

But there is that twist at the end. Through the issue we repeatedly see some twisted demon creature stalking the mafia in the city, ripping out their hearts and killing them. The creature doesn’t eat the hearts – it rips them out and then tosses them aside: there’s no need for the creature to be doing this, because it’s not for sustenance. It simply enjoys ripping hearts out of people. As it goes about its murder spree it makes fun of all its powerless victims, demeaning them even as it kills them for no reason. Come the end of the issue, the twist arrives as we find out that this demon and Violator are one and the same.

The ridiculous idiot and the murderous demon are the same creature: that painted-on happy face is nothing more than a disguise to distract people from the vicious and soulless form within. Marvel, by turn, presents itself as a happy and friendly company – look! It’s smilin’ Stan Lee! – when in reality it’s a corporate enterprise, with no interest in its freelancers other than a monetary one. If you work to their standards they’ll let you continue on for a short while making comics, but as soon as you start trying to do your own thing, they’ll turn on you. There’s a power in that very specific killing stroke which Violator utilises: he rips out your heart. Corporate comics will ultimately always seek to do the same: with McFarlane having made a name for himself at the publisher, he also makes himself a target, and there’s a similar bulls-eye over Spawn the character and Spawn the series. Put it this way: Marvel weren’t thrilled by the idea of a new, creator-owned competitor in the marketplace.

So then Spawn represents McFarlane’s escape from corporate comics – battered bruised and burned, but starting to recover his old form. Halfway through this issue he tries to see if he can use his new powers to restore his former self, only to find that the attempt turns him into a generic white man. Importantly, Al Simmons is African-American: it might seem silly for him to look at his restored, white skin and yell “no! I’m a black man!” but it indicates the caricature of his former self which he’s become. Any attempt to be the man he used to be simply results in a twisted and wrong parody of who he should be: those scars on the surface may be lasting, but they’re a part of Spawn now, and he can’t try to cover them up. Any attempt to hide those scars is a lie, and similarly for McFarlane there’s an understanding that he has to move forward rather than try to replicate his past successes.

In fairness, Spawn isn’t that different to Spider-Man, but it is in McFarlane’s mind – something which is mentioned several times in the Spawn trade paperbacks, which features a quote from the artist between each collected issue. The changes are significant for him, which is what matters here. 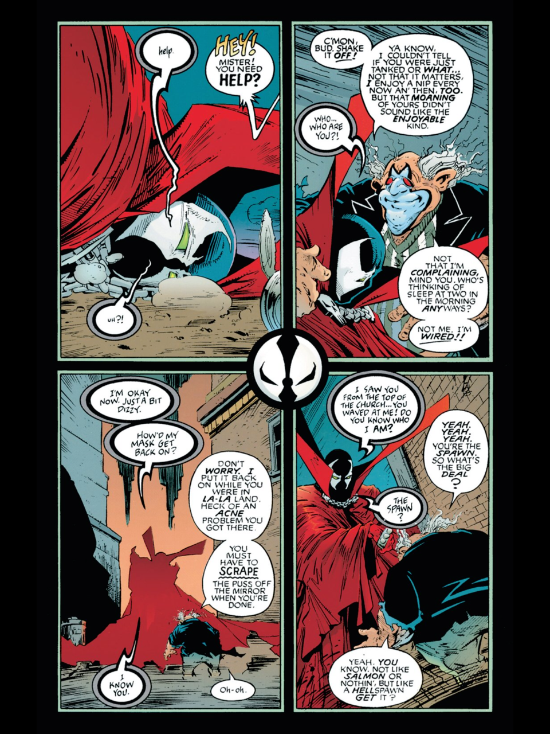 When Violator first finds Spawn, its at a moment of total weakness. His mask is off, and he’s just fallen off the roof of a church (he spends part of this issue hugging a crucifix and mourning his losses: I never said any of this was subtle) after having a panic attack followed by another flashback to his old memories. Violator puts the mask straight back on – he’s no interest in dealing with the man behind Spawn, only the superhero he now presents at. Violator delivers an incredibly wordy threat to Spawn which doesn’t seem at all likely, before then turning into his demonic form just as soon as Spawn turns his back. As before, there’s a difference between the face Violator presents to Spawn and his true nature.

At first sight, you might think that Violator is a stupid creation; a sign that nobody is keeping McFarlane in check and he’s not sure what to do with his new creator-owned series. In actuality, there’s a real argument to be made that Violator is a confident, assured step forwards for McFarlane, which plays directly into his real-world situation and his experiences in comics as a whole. The whole thing is ridiculous and melodramatic… but as Violator himself says: “it seems to work in comics”.