And so we head into the second part of our chart ranking the best opening issues in comics history. Shelfdust asked over a hundred comic book critics, podcasters, vloggers and commentators to pick their personal, subjective favourite ‘first’ comic book issues of all time. They didn’t have to pick the comics they thought were notable or “important” – we asked them to pick the best opening issues based on their personal taste, and then took their rankings and compiled them into a huge master list of over 300 separate comics. From there we ended up with a top fifty list, which we’re counting down all through December.

We’ve reached issues 40-31, which is an interesting point in the list: it features inarguably some of the most beloved and acclaimed comics of all time… as well as some huge surprises. Read on to find out what made our list!

Following their time together on Zenith, readers could be forgiven for thinking that they knew what to expect from the team of Grant Morrison and Steve Yeowell when they paired again for a new series at Vertigo. Yet whilst that sense of political subversion continues onwards from their earlier work, The Invisibles is far more forceful than anybody could have predicted. At once a celebration of anarchy and attack on the dulling down of society, the series kicks off by cramming all its themes into the childhood of a young boy called Dane. Intelligent but working-class, Dane steals cars, smashes buildings, and sets fire to his school – which leads him to be sent to a school where he’ll be made to conform by a series of sinister practices and techniques. That’s when the Invisibles themselves show up, bursting into the room to cause chaos and offer Dane another road to travel down. That synopsis is only a small fraction of the overall story on offer here though – the issue finds time for an acid trip, a cameo from two of the Beatles, and all manner of other strangeness. Morrison came into stride with the Invisibles, and the first issue is a bold step into anarchy.

The first issue of Monstress offers a clever trick for readers: it shows them everything, and then reveals that there’s far more to “everything” than they could have ever predicted. The story revolves around a young girl called Maika, who is sold as a slave to wealthy masters – only to then turn the tables entirely on them and orchestrate an escape. As told by Liu and Takeda, that breakout is thrillingly put together, setting up the rest of the series to then build up on that concept and spiral out into a wider and darker world. This story alone is dark enough, however, with Takeda putting some disturbing and creepy touches into the characters which leaves everyone feeling unpredictable and dangerous. That includes Maika herself, who proves that there’s far more going on in her head than anyone could have expected. 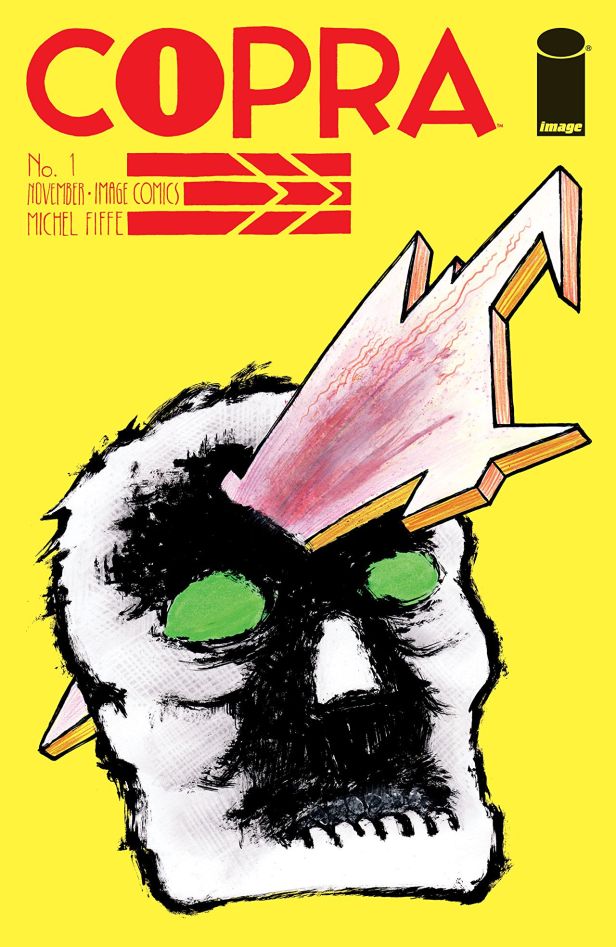 “Inspired” by Suicide Squad, Copra is an action comic with the unmistakable hand of Michel Fiffe on the accelerator. The first issue sets up all the hallmarks of the series as it continues onwards: the gleeful chaos of the fight sequences, the death tally, the attachment to the characters. It also keeps the reader guessing throughout, unsure who is going to make it out alive or how the more eccentric aspects of the story are going to resolve themselves. The first issue sees a team of expendable assassins sat in a van, surrounded by a head which has some kind of radioactive lance spiked through it. Readers are going to think “how did that happen?” when the actual question is “what can that head do?” — which then gets answered right at the end and reveals the spiky cliffhanger which’ll propel through into the next issue. Throughout, Copra keeps you as off-balance as the characters themselves, and it’s gloriously mad.

“She kicks butts and eats nuts”. Okay, so you might be cynical about Unbeatable Squirrel Girl making it into this list: but that’s what Squirrel Girl is all about, isn’t it? You have an expectation for what she is based on her name and powers, but the reality is more considered, humane and powerful than the initial first impression. The artistic team of Erica Henderson and Rico Renzi do a superb job of redesigning the character to last, and writer Ryan North acknowledges the silliness of the series whilst never denying it: your expectations of the character is a crucial part of the storytelling. The first issue gives us a Squirrel Girl who is suddenly the most realistic superhero in all of comics: a nice, charming girl whose capacity for understanding and empathy gives her the ability to stop any villain in their tracks. The fundamental warmth of the series radiates out straight from the first issue.

There isn’t a moment for anyone to breathe in Bitch Planet. The opening issue understands that readers will get what’s going on, and so it spends its pages making sure that every incident has purpose rather than trying to catch them up with exposition and introduction. When a new batch of women are sent to a “facility” on another planet for being “non-compliant”, we see them try to resist immediately, only to be shut down frequently. Whilst we see them struggle, the issue intercuts with a sequence set back on Earth, where a man tries to deal with some paperwork. It seems like he’s trying to help one of the women, but it eventually becomes apparent he’s only serving himself. That’s the dynamic which will recur throughout and the storytelling is clear: this isn’t going to be a story where the men are any help at all. Bitch Planet came at an appropriate time for this kind of story to be told, but it’d resonate regardless: de Landro shines and DeConnick is a striking storyteller.

Planetary sees a team of exceptional pricks working together to save the world from unbearable pricks. Created, of course, by Warren Ellis, the series starts off with an issue which focuses in on two of its primary characters and lets you know that they are both unparalleled in terms of genius and action. Then it sends them off to meet other dangers, and to deal with people who refer to them as “son”. It’s a specifically Ellis sort of story, with magnificent bastards lording it across one another through judicious use of one-liners, pinned together by Cassaday’s sturdy character and frequent use of decompression. It’s a comic where every beat lands with exact precision, and each character is thinking ahead of themselves and the story in ways which keep the reader unbalanced and waiting for the next impressive feat. It’s all very mysterious, which is what keeps things interesting: with a team of masterminds at the core, it’s clear that every one of those mysteries is going to be completed cracked open before this thing is through.

When Grant Morrison and Howard Porter came to JLA, the series had lost some of its killer-edge. Their response? Bring in all the A-List heroes together and make them the focus of the story. By having all the big-name characters in one place, each story arc could become some kind of huge impressive epic, and make the series feel relevant and powerful again. The strange storytelling of Invisibles or Doom Patrol was put aside in favour of more glorified superhero ideals: surprisingly, the team played into every dream about each character and let them all feel powerful or inspiring in their own way, rather than trying to beat them down or offer some kind of subversive take. Batman was the smartest man in the world; Superman the most considerate; Wonder Woman was powerful and sharp ; Green Lantern was the everyman. And in the first issue? A new team suddenly appeared as well, apparently a step forward. It gave the creators a chance to show just why people should care about the JLA again, and offered a take on superheroes which could be just as high-stakes and melodramatic as anybody would possibly want it to be.

One of the most unexpected success stories in comics started off with four turtles, some mysterious chemicals, and a surly rat. Teenage Mutant Ninja Turtles is exactly what it says it is, only far darker than anyone might have predicted for a comic with that title. Originally intended as a pastiche on several other comics published at the time, the first issue instead caught the mood of a nation – and the television and toy industries – and turned a silly one-off issue into a mega-franchise which made the careers of both Eastman and Laird. The story of the four turtles, each of whom was given a different signature weapon and the name of a Renaissance-era artist, the opening issue is a rough but ready take on the characters, and you can see how things spiralled outwards, kicked up a notch, and because the powerhouse franchise it became today. It marries just enough silliness to its seriousness to strike a chord with readers, and their world quickly grew and grew.

Duh. One of the greatest ongoing comics of all time had to make it into the list somewhere, and although I’m sure many people will be dismayed it didn’t chart higher, maybe some people should’ve checked their emails more often whilst the list was being assembled, eh? Los Bros Hernandez are regarded as two of the greatest cartoonists of all time, and although a little rougher, you can see their style showing through in this very early work from the pair. There are several different shorts in the issue, but of perhaps most note is the start of the long-running characters Maggie and Hopey, who would go on to become two of the most enduring and beloved creations in comics history. Forward thinking and subversive, there was no doubt that Love & Rockets was going to appear in this list. It’s hard to really even say that much about it other than to agree “yes, this IS a wonderful comic”.

Ah, a millennial comic charting above Love & Rockets, that’s sure to go down well with readers. But hey, let’s steer into it, because there’s a lot of the same DNA informing both comic series. The first issue of Crowded – about a crowdfunding app which allows people to hire assassins to take out people they don’t like – runs on cheap coffee and cigarettes, with a wiry, spiky energy which propels its mismatched characters into a gonzo world filled with high adrenaline and constant paranoia. It’s the comic of the time, in many respects, with the nervous tics thrust into the story by Sebela matched and ramped up into cartoonish – yet empathetic form – by the artistic team. Perhaps over time Crowded will fall from its perch above one of the most acclaimed comics of all time – but right now it’s the comic, the sign of the times, and from that perspective you can see why it’d land so high on the list.