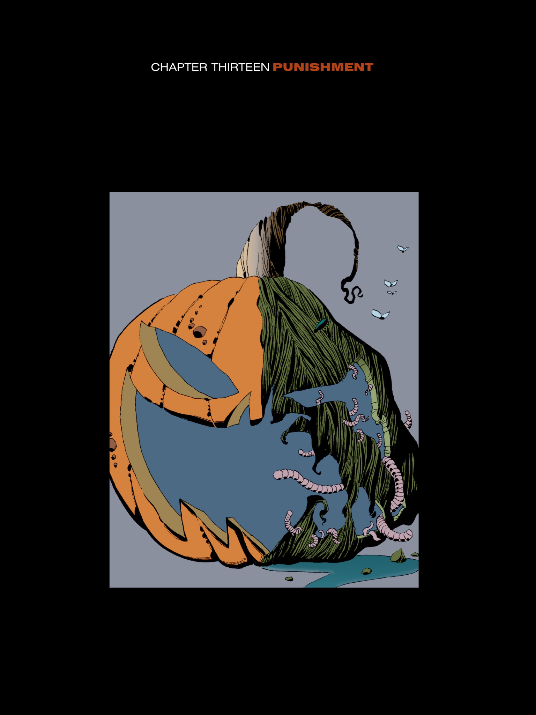 As The Long Halloween wraps up a year of murders, everything falls into place, as long as you forget about half the storylines. The conceit of the series is fun, and the artwork from Tim Sale and Gregory Wright is lovely, but the narrative has gone all kinds of off the rails, and it’s hard to know what to make of the finale. Half the issue isn’t even set at Halloween! The rules have stopped applying, and that’s in some ways for the best, but some ways for the worse.

I think this is the first time an issue has taken place over multiple days, starting out with the apprehension of Holiday and then spreading out over the next few weeks to show the aftermath of his actions. For being the serial killer at the heart of the series, Alberto Falcone doesn’t really matter much in the long run, it turns out. He’s captured in pretty sharp fashion by Batman and Gordon, who throw him in jail. He’s shortly after given the death sentence, and not even a visit fromn his dad can convince him that this isn’t exactly what he wanted all along. And that’s the end of our Alberto, at least as far as The Long Halloween is concerned. He gets a cell opposite Calendar Man in the gimmick wing of Arkham Asylum.

For a series which is pretty clearly trying to look at the sweep-up of the old era of villainy in Gotham in favour of a new breed of super-villainy, The Long Halloween sure does forget the lines it’s trying to blur. We’re set up here to see Alberto as someone who feels left out of his father’s affairs, and turns to super-villainy in an attempt to make some kind of name of his own, free of his family’s legacy. The problem is that “Holiday” is just a name, and there’s nothing else to the character going on here. Poison Ivy has plants growing out her skin; Joker has a poison-inflicted grin filled with a hundred sharp teeth. Alberto… has a hat and a gun. He is still just a mobster, and he’s not playing the rules anything like a super-villain would (as will be shown in Dark Victory, the sequel to this story).

In turn, Carmine Falcone is undone by his associations with super-villains, as all the characters he’s welcomed onto his payroll show up at his office under the leadership of Harvey Dent, who is now going by the name “Two-Face”. It’d be a clever way to round out his character arc if it weren’t for the fact that the room has both Catwoman and Penguin stood in it. Catwoman, for one thing, has no reason to be here – she’s not been a villain in this story, and her mysterious connection to Falcone doesn’t get discussed once here, not even after Two-Face murders him. And this is our first time even seeing Penguin in the story! He’s stood there with a big grin, whilst Riddler (who actually WAS on Falcone’s payroll) is presumably still off at a bar somewhere, drinking shots.

The only scene which sets up the conclusion is last month’s face-off between Dent and Solomon Grundy, in which they reached a peace between one another after Harvey showed some empathy for the big guy. We’re supposed to see that Harvey has decided to take that understanding and build on it, breaking everybody out of Arkham Asylum so they can work together as super-villains to kill the last of the gangsters, the last man standing. Harvey hasn’t been developed since the acid attack, though, and there’s a crucial missed beat in the storyline. Harvey goes from believing in the law, to trusting himself, to trusting only the flip of a coin – putting justice in the hands of fate, essentially, after his own judgement proves to be wrong when Bruce Wayne went free. But we don’t get to see him develop that last step in his journey – he just reaches it, and the first time we really see him is the moment he goes too far and kills Falcone (and, later, Vernon – seeya Vernon). His story is rushed, which is the case for so much of the finale.

Gordon has the least satisfying part of the story, falling almost completely to the wayside here. He sees this as a hollow victory for the heroes, with all the villains put in jail where they belong. He says he still believes in ‘Gotham’, echoing the first words of Bruce Wayne in the first issue of the story. And you can see the essence in what he’s saying, even as it’s clear he doesn’t really believe much of it himself – all the villains have been put in Arkham, all the mobsters are dead, and technically that means the streets of Gotham have been saved. It wasn’t the police who did it though, but the villains themselves. Alberto took down Maroni and the rival crime gangs before Dent murdered Carmine Falcone, before handing himself in. Gordon was just a bystander for all of it, as a reminder that the police of Gotham are simply ineffective in shutting down the problems that the city faces.

Batman ends up saying “I believe in Batman”, which is far too pat. His arc has seen him try to work with other people, lose track of what they’re up to, and then feel sad when he finds out they’ve gone off the rails. He’s also been a surprisingly passive force through the series as a whole, who spent his time ignoring the Holiday case in favour of fighting the more interesting super-villains who zip past the window. If Gordon – who stops Batman from going too far with Alberto when ‘arresting’ him – represents the old school law enforcement of Gotham, who tangles with the mob; then Batman represents the superhero who can barely pay attention to the bank balance of mobsters when there’s clowns in biplanes he can go punch instead. Neither Gordon nor Batman prove effective in The Long Halloween: the ultimate triumph goes to the criminals in Arkham who will probably escape again soon and cause more problems.

That’s the rough arc of The Long Halloween, but the series suffers from now setting enough points in stone early on. The Holiday mystery is smart and makes sense throughout, but the other elements don’t fall into place like you’d want them to, and so we reach the conclusion and see Carmine Falcone murdered whilst Catwoman barely flickers an eye. Calendar Man just stands around aimlessly in his cell the whole time; Harvey Dent jumps from prosecuting DA to mass murderer between issues, and nothing seems to really matter in the long run. We should feel devastated that Harvey Dent has had such a fall from grace, and broken up the heroic trio with Gordon and Batman – but as they all reconvene on the roof once more, they don’t have anything meaningful to say to one another. You’d think writer Jeph Loeb would have something in his back pocket for this final iconic meeting between what were meant to be the three leads of his series… but instead it peters out, as the series itself does.

And then we reach the final few pages, in which we find out that Gilda, Harvey’s dead-eyed and meek wife, was apparently a murderer herself. In fact, we’re meant to believe that she committed several of the Holiday murders herself, hoping it’d mean Harvey would be able to come home earlier in the evenings and spend more time with her. What are we meant to make of that? The idea would be that she started the murders, that Dent then took up the mantle from her starting with Alberto’s ‘murder’ on New Year’s Day, and from then onwards Dent was the Holiday killer for the rest of the year.

The story beat isn’t followed up again in any meaningful way anywhere (and Gilda basically goes AWOL, mysteriously, which I quite like). The important thing here, though, is that she’s quite serious when she says that Dent murdered Alberto, which we know he didn’t. Therefore can we chalk this all up to delusion on her part, or was she actually involved in the murders? And if she was, did she share them with Alberto and Harvey, or? It’s a complication at the end of the story which makes things less complex, really, and it’s usually forgotten about when people talk about the series as a whole.

Ultimately, The Long Halloween is a story about Harvey Dent and Carmine Falcone, a good man and a bad man who each turned to the super-villains of Gotham to steer them into power – which led one to kill the other, and for both to see everything they worked for end up destroyed. In that light, Batman’s final declaration “I believe in Batman” stands out. He’s embracing the costume and the fear it brings to criminals, and resolute to that cause. With Gordon resolute to following the word of the law, it leaves them as the line of defence against those like Harvey Dent, who wears his corruption as a scar. A new line is drawn through Gotham, and it’s an interesting one. Hopefully it’ll lead to more interesting stories than this one, which sadly falls apart on reread. Let’s not make an annual thing of this, eh?