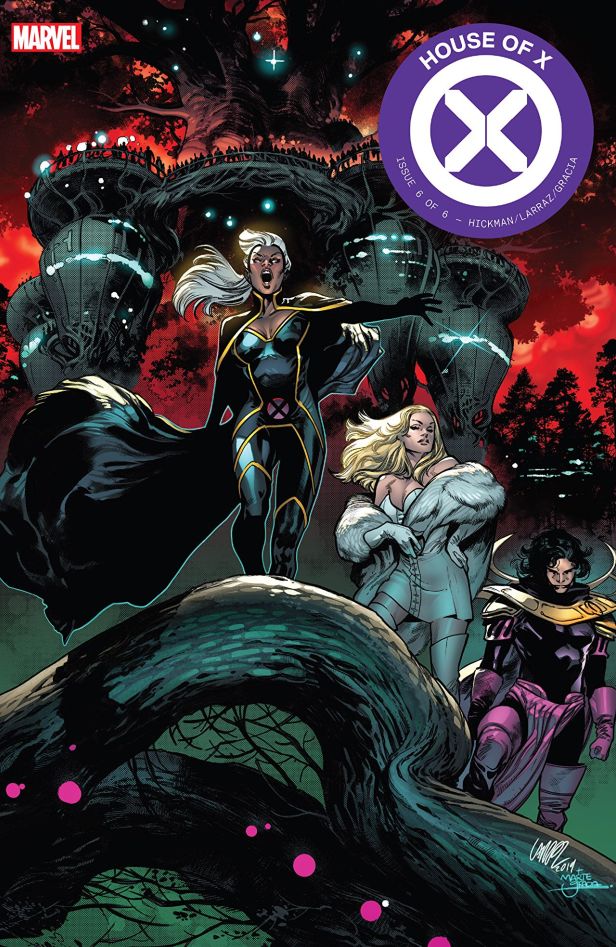 In what feels like a conclusion for the X-Men as a whole, the final issue of House of X offers a complete and happy story for the mutants: it’s essentially a victory lap. They have their own world, they have their own rule of law and complete autonomy; and they have all their friends and family together in one place. It could have felt corny, but instead it all feels desperately earned and vital, with Xavier’s dream proving to have been not only possible: but necessary all along.

Xavier has become more and more humanised as the series has gone along, despite that creepy helmet and the cultish elements introduced into the character. From his first appearance floating above his ‘hatched’ X-Men with his face hidden, he’s been pushed into a more familiar role as a leader for mutantkind – albeit one who has decided to work with more authority than he’d ever allowed himself before. It seems telling that Xavier gives a telepathic speech to the whole world at the start of the issue – the act by itself is one of authority, beaming his speech into the mind of every single person on the planet, without warning. But then we see Xavier constantly push that little further – telling humanity that they’re going to barter the drugs to them rather than give them away for free, because humans have not proven themselves worthy of free trade. Humans have repeatedly turned on mutants – even the Avengers, who get prominently featured during the speech – and Xavier is no longer willing to compromise with any of them.

And that’s really what the series has been about to this point. Mutants always compromised in some way, working alongside humans in the hope that prolonged exposure will take the fangs out; will soften the blows. But humans are always going to strike back at mutants in the end, and the core of Xavier’s plan is to simply remove them as an issue. He tells everyone that mutants will eventually, inevitably take over the world, and this plan is simply a way for them to bide time until this happens. It harkens back to Grant Morrison’s vision of mutantkind overwhelming the world and becoming the norm, but this time without giving humans the option to stop them before its time.

Xavier’s long-term planning has been fascinating, with Moira’s insight giving him options he’d never normally have taken. Remember: Xavier didn’t even tell the world he was a mutant until several decades into the X-Men comics being published, and now here he is taking the lead and not only using his powers to connect the whole world – but using them to tell the world exactly what is going to happen. They don’t have a choice: this is the way of the world. This is a more headstrong Xavier than ever before: this is a more radicalized Xavier than ever before.

His stance alongside Magneto plays into this – rather than continue to stand at ideological sides, the two friends have been able to find an approach which plays into both their approaches without stating one as superior to the other. Xavier hasn’t compromised and neither has Magneto (or in fact any of the other mutants – Apocalypse and Sinister as two obvious further examples) in order to achieve any of this. He simply followed a longer-term plan than he’d ever allowed himself to try before.

The council meeting in this issue is absolutely enthralling, to be honest. Not only does it put several deeply interesting characters around the same table, but it allows Hickman and Larraz to play around with character conflicts and discussions which have never happened before. There’s a lot of nuance on display, from Storm openly questioning Apocalypse through to Mystique holding up the meeting to ensure her son Nightcrawler gets his say. Considering the much-floated idea – which I believed as well – that there was some idea of brainwashing involved in the story, what we have here is proof that all the mutants are thinking for themselves and working as a group because that works, rather than because they have an ultimate agenda.

Well… Sinister probably has an agenda. The others, though.

What comes across most strongly is how much voice each of the characters has. Exodus gets to give a short speech about the sacred land of Krakoa, which is in keeping with his role. Sebastian Shaw is concerned with class politics and wealth. Emma tries to psychically control Sabretooth – but is only successful when Jean puts her powers into action as well. Apocalypse only cares about certain aspects; Storm has particular goals, and everybody here feels like themselves, causing friction but accepting their wider ambitions. It seems simply that everybody is thinking of the future, rather than the present, which allows them to have their disagreements without turning over on each other, fighting, or plotting behind their enemies’ back. Quite simply: there are no enemies here, even if some of them don’t like each other.

But more importantly, what we do get here is a reforging of relationships. Whether we see Emma and Sebastian Shaw forced back together or Mystique and Nightcrawler on the same council; what we’re getting in this issue is a sealing-together of old wounds or cracks in the foundations. Several people on the table have tried to kill Xavier in the past: some of them successfully. Regardless, when they sit round the table, they think on their personal interests but then turn to the best and most important steps forward for their species.

It’s therefore no surprise that the final scene is used to bring in some connections to the X-Men of old, and allow the reader to feel both nostalgic and proud of the characters: look! Siryn and Banshee are back together, Dazzler is performing, and Skin and Synch have been brought back to life! After a long time spent with just some “core” characters, this is the issue which goes out of its way to make the longterm X-Men readers feel happy and excited that their favourites, after all this time, have finally “made it”. That will possibly all get pulled away from us in future, but right now we’re looking at a storyline where the X-Men win and get to do that Return of the Jedi party finale, complete with fireworks. The final half of the issue is designed to make readers feel that the journey has come to an end, and it’s surprisingly successful in achieving that feeling. We’ll get a continuation of the story from this point onwards, but what’s startling is how the creative team have established a conclusive finishing point for the X-Men as characters. Powers of X will, presumably, then show us a new beginning in some fashion.

For now, we have Wolverine sharing a beer with Cyclops and with Gorgon; Emma Frost and Jean Grey apparently at a truce; Apocalypse sitting and watching over everyone; and characters like Anole, Surge and Jubilee celebrating. This is the part of the X-Men books which has been missing for so long – with only the “main” mutants appearing, and all the other mutants being new ones who appear as background, it’s here that Larraz finally starts to populate the background with characters the readers already know, and brings some individuality back into proceedings. I’ve spent the last few months repeatedly talking about mutants as this gestalt mass, but this issue in particular promises that the X-Office haven’t forgotten how much everybody loves a D-List background character. Goldballs gets to dance at the party just like everybody else, and that adds a certain level of depth to proceedings, even without them speaking.

The issue feels like the culmination of the journey which we as readers have followed the X-Men along for, in some cases, decades. It’s only right that the final celebration of House of X gives us some familiar faces to celebrate alongside.