Welcome to Spider-Man Roulette! Shelfdust’s Patreon backers were asked to pick a number at random – and now I’m going to write about whichever corresponding issue of “Amazing Spider-Man” they chose! This issue was picked by Patreon backer Daniel Elkin, who chose number 673 for the roulette!

If superhero comics leave their characters in a permanent state of suspended animation, unable to change in revolutionary or format-breaking fashion, then there is at least one aspect of a series like Spider-Man which has no option but to change and develop over time: the setting. Spider-Man will always struggle with “The Parker Luck”, power and responsibility, and staying fair and loyal with his friends and loved ones. New York City, on the other hand, is ever-changing, and evolving in time and in line with the real world.

Amazing Spider-Man as a series has to feel contemporary at all times, and that means that it absolutely has to keep up with the times, changing as New York culture and society changes in our world outside the comic. It’s reflected in the way that artistic teams are adding a more accurately diverse crowd to their scenes, and how the scripts bring in more people of colour; more disabled characters; more queer characters. New York has always has marginalised people, of course, but it’s only in the last few decades that they have been able to be seen by media, and so it’s only in recent years that comics have caught up and started to be more fair and genuine in the way they represent NYC.

This is in part because other media has also had more of a chance to weigh in on Spider-Man and his world over the years: the Sam Raimi era of Spidey movies had scenes where New Yorkers stood up to the villains in their city, for example. They threw rocks at Green Goblin and protected Peter’s identity after he fought Dr Octopus, and generally stood up against people telling them what to do or what to be scared of – basically acting up as the ideal of what New Yorkers think about themselves as a people. That influence has moved across into the comics in recent times, with the people on New York now an active part of the comic, and often turned to to either offer support or humour to the series.

Issue #673 of Amazing Spider-Man is set at the end of a major crossover storyline called “Spider-Island”, in which most of New York was apparently turned into a giant spider and sent out to hunt each other – and, crucially, to hunt down Spider-Man himself. Whatever they did to fix it has come and gone, meaning everybody affected wakes up the morning afterwards in the middle of the street, completely naked. Being a Dan Slott comic, that pretty dubious premise is played off for laughs – oh look, Hercules is naked! Etc – and gives the people of New York plenty of room to show off a bit of their character. It also shows how savvy they are with the familiar in-jokes of superhero storytelling, noting how arbitrary their nudity is. Some of them are still wearing their glasses, which meant they must’ve kept them on when they turned into spiders. It’s those little jokes which show off how the people of New York have gone from being awestruck by superhero life to being genre-aware.

There’s a scene in this issue where Spider-Man gets called down by a clear-up crew, and starts shifting cars around to help them out – only to be told he’s messing around with their union rules and needs to stop. Again, it’s that combination of humour and arrogance which fits the stereotype of New Yorkers. But following that, we see Spidey carry out a proper conversation with the worker, Elio, who tells Peter that Spider-Island has changed his opinion on the hero. As times change and grow, so do the people of New York, and their approach towards the most famous superhero on the block. 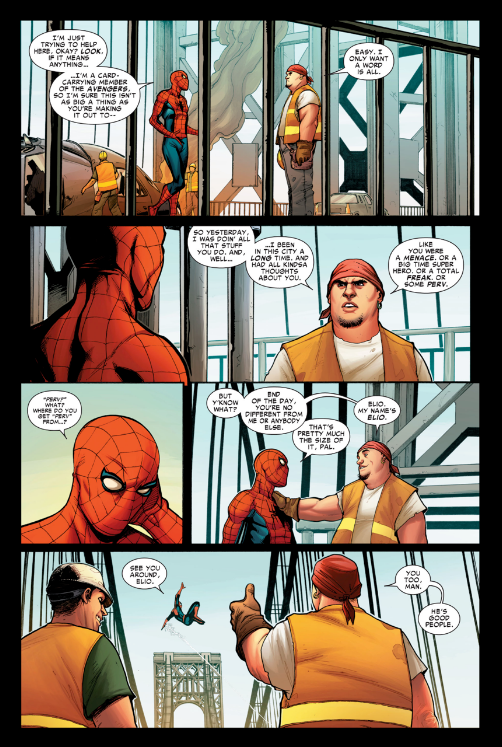 It’s also reflected within the supporting cast. His girlfriend at this time is Carlie Cooper, a forensic scientist who, it turns out, has just figured out his secret identity. The treatment of her character as she finds out his identity is pretty interesting, because she’s less interested in her boyfriend being a famous superhero (as happened with previous reveals in years gone by) and more interested in her boyfriend, y’know, openly lying to her for months. It’s another slight change in the way that characters act and behave over time, and although it means Spider-Man can revert back to being single once more and leaves his character basically reset, it also shows how the people around him systematically have to change over time as society itself changes.

Changes like J Jonah Jameson taking over as Mayor of New York lead to casual character building and give us new insights into character when they’re done well… but they’re never going to be the lasting status quo. Jameson’s tenure as Mayor largely was used to stack a societal deck up against Spider-Man, but in this issue we get to see that all lead to an earned and justified final page in which he arranges for the Empire State Building to be lit up in Spider-Man’s colours. Again – Jameson won’t stop hating Spider-Man, and things won’t ever change forever for him, but there are these small changes and concessions towards how society has changed constantly at play within modern scripts. The more consciously aware world of Spider-Man: Homecoming will likely play into the series even more at some point in future (perhaps when they hire somebody other than Nick Spencer to write the comic) and we’ll see even more change from within.

After being found out by Carlie, Peter asks why his mystical protection (the reason why nobody knows his secret identity) has worn off and Dr Strange basically just shrugs him off – that’s how important status quo is for the character. What’s interesting is seeing some truly unexpressed elements of his character building up here, perhaps even subconsciously. His white male privilege and the quiet toxicity of his choice to lie to all the people in his life are sat there, waiting for someone to take advantage of and bring to the forefront. Seeing Carlie chew him out for lying to her is a start, but this feels like the beginning of another slow-burn change to the portrayal of Spider-Man which could well start to really come to the fore over the next few years.

If Marvel allow it, that is. There’s a level at which they have to raise the bar, but that level only rises so far as public perception allows it to. There can be queer characters in the supporting cast, and people of colour – we still seem to be a way away from trans characters appearing. Watching the level rise is frustrating, quite often – but there’s that hope that it’ll eventually rise far enough that representation won’t be the lowest bar anymore.