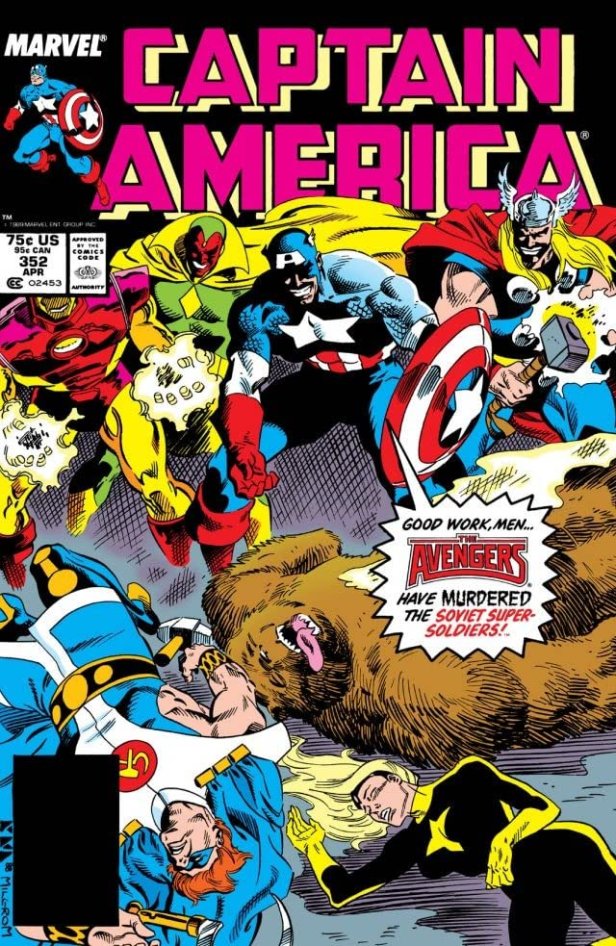 The truth was worse: I’d never heard of her. 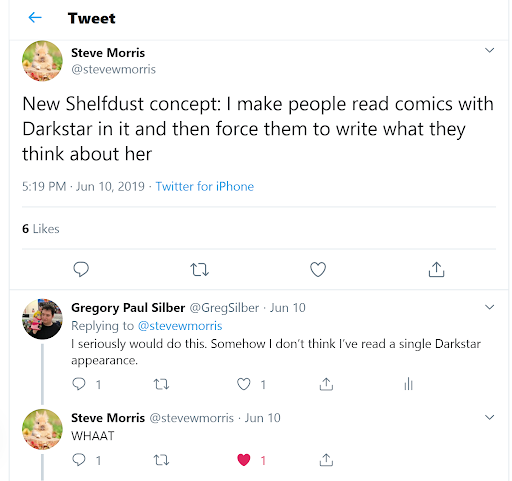 It’s a bit embarrassing to admit. I’ve read enough Marvel (and DC for that matter) comics at this point that there are few superheroes with whom I’m not at least passingly familiar. I can’t tell you much about Namorita, for example, but she’s shown up enough across various titles that I could at least recognize her.

My deep shame aside, Steve’s suggestion that I learn about Darkstar through the lens of Captain America #352 seemed like a fun opportunity. For the purposes of this experiment, I didn’t do any other research about Darkstar, preferring to go in as blindly as I would have if I’d picked the issue of the shelf on a whim in 1989 when it was published. After all, while Captain America is among my favorite Marvel heroes alongside Daredevil and Spider-Man, this was also my first experience with writer Mark Gruenwald’s long-running stint on the title.

Captain America #352 is also co-plotted with “breakdowner” Kieron Dwyer, with finishes by Al Milgrom, colors by Bob Sharen, and letters by Jack Morelli. Visually, it’s about what I expected from late-80s Marvel, but the meat-and-potatoes style is as appealing as ever. Unfussy layouts, expressive body language, dynamic action… what’s not to like?

We open with an exasperated Cap monitoring four novice superheroes during a tryout for a spot on the Avengers. One of them is a woman I’d never seen before, but her name is Gladiatrix (amazing), not Darkstar. Speedball was the only Avengers-hopeful I recognized, as Mechanaut and Blue Shield are entirely new names and faces to me. It’s not clear what sort of instructions they’d been given, but somehow the training resulted in a full-on brawl. 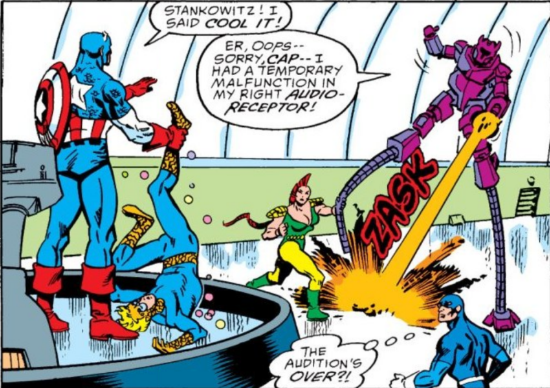 “Hmm, maybe it wasn’t such a good idea to invite everyone who inquired about membership in the past six months to try out at the same time!” Cap thinks. I couldn’t help but wonder how an internationally-known superhero team like the Avengers could get so few applications over such a long period, especially since among them they’re apparently all qualified enough for a callback, but I’ll save that speculation for my fan fiction about the human resources department at the Avengers mansion.

Anyway, Cap halts the anarchic tryout, and soon receives a call from security about a strange energy signature, and in Cap’s absence, the Americans learn it belongs to three superheroes arriving from Soviet Russia. One man looks a bit like a Soviet Thor, with a hammer and sickle emblem on his chest and wielding a literal hammer and sickle. Another is a talking bear. And at long last, there’s Darkstar, looking a bit like late-70s Jean Grey with blonde hair and a black and yellow costume. 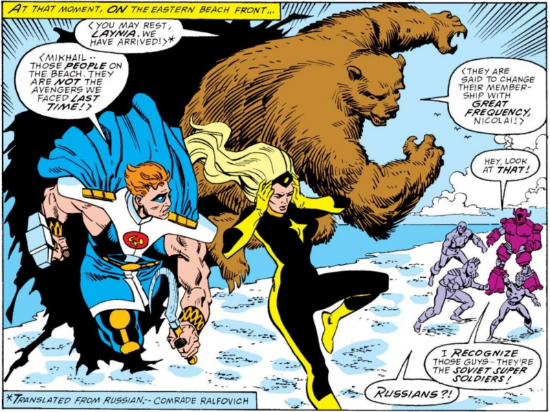 Speedball recognizes them as “Soviet Super-Soldiers,” so naturally, because this is a Marvel comic published during the Cold War, a fight breaks out. Interestingly, the American heroes are the aggressors here, as the Soviets are surprised to have been attacked simply for showing up, and fight back to defend themselves.

Cap returns to break up the fight, and learns that the Soviet Super Soldiers arrived in the hopes of defecting to the United States. “My sister, Major Ursus, and I come in peace, Captain!” Vanguard pleads as he supports the injured Darkstar. “But we were attacked the moment we arrived. We had no choice but to defend ourselves!” Is this a commentary on U.S. immigration practices? Probably!

The new arrivals take priority over the tryouts, so Cap gives the applicants one of his signature pep talks before sending them back home. Then we return to Avengers Island, where the Soviet Super Soldiers sit with Cap to explain why they’re defecting. 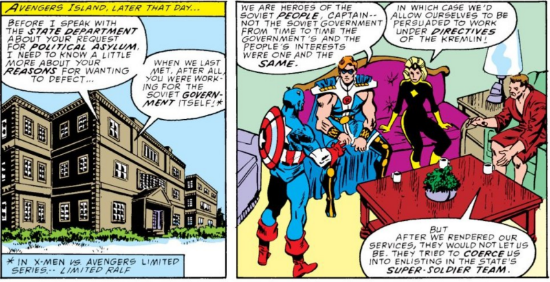 It’s interesting stuff, and I’d be interested in exploring more of it through a deeper dive into Gruenwald’s run. The SSS appreciated their role as heroes to the Soviet people, but that was separate from their subservience to the Soviet government. The decision to defect was made when they realized that the Kremlin would never stop monitoring them or expecting them to bend to its will.

Sympathetic to the SSS’s plight and eager to welcome them as allies, Cap leads the Soviet heroes to a “simulated combat” session with Iron Man, the Vision, and Thor. He leaves to take care of his own super soldier business, and in his absence the issue ends on a surprise reveal that I don’t want to give away.

As a Captain America issue, it’s good stuff. Like my favorite Cap stories, it explores American ideals that the United States, as a government and a culture, sadly doesn’t live up to as much as he would like. Refugees arrive, peacefully, after escaping hostile conditions in their homeland, and are immediately attacked because of how they look and the language they speak. 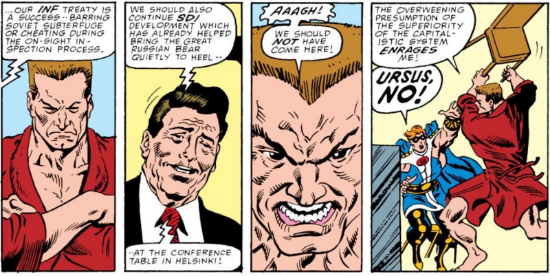 As an exploration of a character I’d never heard of, I’m more disappointed. I’m fascinated by the Soviet Super Soldiers as a collective, but I don’t feel like I learned much about Darkstar specifically from this issue. I suppose her brother, Vanguard, is the leader, and the hot-tempered Ursa Major’s ability to turn into a bear is a fun, simple gimmick, but what’s Darkstar’s deal? Her powers are, at least in this issue, somewhat ill-defined; she can fly and shoot some kind of laser-type blasts out of her hand, but I’m not sure how her other powers work.

Perhaps most importantly, I still don’t know why Steve seems to like her so much. At least in this issue, she doesn’t have a distinctive personality, and she certainly doesn’t seem to have much going for her beyond her relationship with the rest of her team.

But if the way to learn more is to finish reading an entertaining Captain America story that criticizes American foreign policy and xenophobia, that’s fine by me.

Gregory Paul Silber is a writer and editor who has appeared in Panelxpanel as well as at CBR and most often at Adventures In Poor Taste. You can find him on Twitter here.

This post was made possible thanks to the Shelfdust Patreon! To donate, head to our Patreon page here!

One thought on “Who is Darkstar, and Why Does Anyone Like Her? An Exploration of Captain America #352”