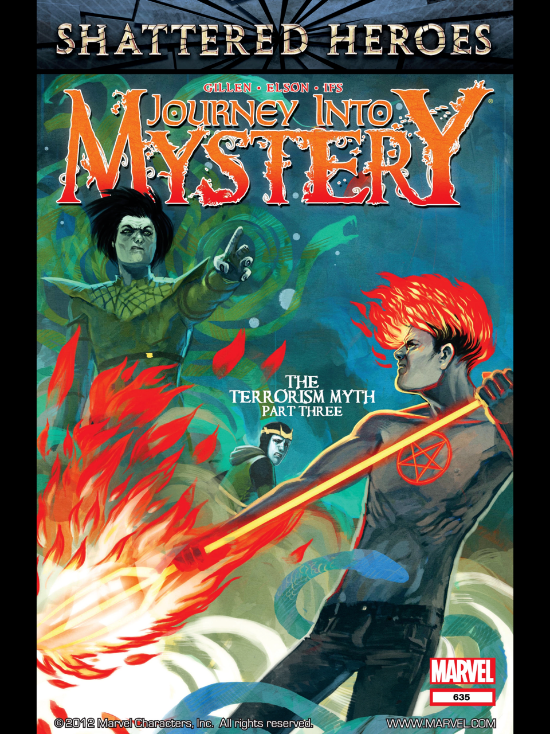 Kid Loki’s quest to save everybody from Fear, Itself sends him off on a prolonged suicide mission, where he is forced to put the lives of everybody else ahead of his own. We find out here that there are hundreds of people who still have fear “stuff” stuck in their heads, all of which is growing so Nightmare can ultimately harvest the crop and increase his power amongst the other Fear-Lords. Each person has their own story of how the big event crossover scarred them in some way, making them perfect ground for Nightmare to cultivate his crop, and throughout the issue we’re reminded how an event storyline plays out for the little people on the ground – the people who never get considered in the grander heroic scheme of things.

It’s telling, then that Loki increasingly plays less and less attention to the people he’s ostensibly rescuing, as his mission becomes more and more of an annoying distraction. He’s treating symptoms rather than the cause, sure, but he’s also saving the lives of individual people who have been through huge traumas and don’t deserve to be left in an unending nightmare. His active participation in the rescues starts off with him not only stepping into the dreams of each of these victims, but pausing to talk to them, to help them, and to offer his own form of guidance for them. As time passes however and that task becomes more of a Sisyphean chore, he spends less and less time with these people.

The last person Loki heads off to rescue, a young boy who saw his brother die in front of him, doesn’t get any reassurances. He wakes up to find Loki and Leah already in a completely different mental place, talking to each other and with their backs turned to the boy. He doesn’t get a heroic rescue – he just gets a rescue, and is left to his own devices as soon as he wakes up. Loki’s battle with the fear residue has moved him beyond this simple rescue mission, and he’s now determined that he has to save himself if he is to save anybody at all. He forces Leah to mine the fear from his head in one go, reasoning that Nightmare will be more interesting in this core than in the small portions everybody else has. It’d almost be a heroic sacrifice if it weren’t actually saving Loki’s own life first. 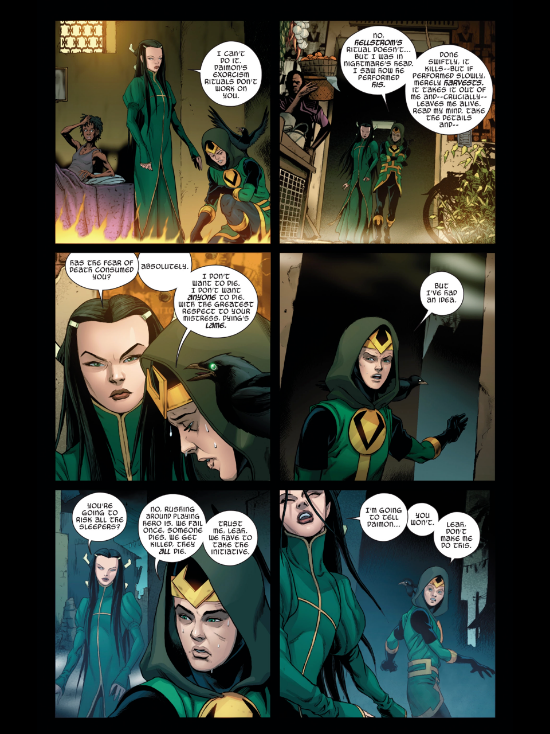 This storyline doesn’t really work as a whole, because the stakes are so hard to get a proper grasp on. It’s nice to see consequences from an event crossover storyline, but the fear stuff is a nebulous item, its power not really explained and its purpose somewhat irrelevant. It’s simply the thing that everybody is trying to get their hands on at this particular point in time, and it’s not clear why any of the actions seen here are particularly relevant. Why is Loki refusing to clear the fear from his own head at the start of the issue in favour of rescuing random people? Having it gone would help him with his overall mission, and it doesn’t help Nightmare, as far as I can tell. There’s the germ of a solid idea here, but it just slips away from the comic as the story progresses. The overall plan makes sense, in a way, but the mechanics don’t fit together, leaving the characters to charm the reader away from really thinking about what’s going on.

Interestingly enough, that’s happening to Loki as well, though. The whole time, he also has Ikol’s voice in his ear. Ikol is a character I struggle to keep tabs on, to be honest. I understand that the bird is a voice of nostalgia for Loki, reminding him of his past whilst somewhat encouraging him to return to it. That honeyed voice in the ear seeps poison to Kid Loki at all times, but I have a hard time in understanding what Ikol’s purpose and ambition really is. His relationship with Loki exists simply because it does, and there’s a block in my head which refuses to connect everything that’s going on in their pairing. As with this arc in particular, Ikol’s role seems to have no solid ground to it, forming a soft mist around Loki which doesn’t (at this point) do much to deepen either character. It just leaves things feeling vague.

Eventually Loki is freed from the fear residue, and he immediately offers it to Nightmare, once more giving one of his enemies everything they want as a way of tying their hands together. We’ll get into that more with the next issue, but here we can see Loki once more upsetting all his allies as his thought process works in a different way to the people around him. He has a plan in place but he doesn’t convey any sense of authority – which is why it’s so shocking to Leah when he gives her a brief demonstration that he controls the power dynamic between them. Hellstrom also struggles to keep up with Loki’s left-field planning process, which isn’t helped by Loki’s decision to leave him out of the new plan.

Throughout the series we’ve seen Loki give power to his apparent enemies, but we’ve also seen him withhold information from his most powerful allies. From Thor through to Volstagg and now Hellstrom, Loki’s thought process works villainously: he doesn’t work in concert with other people, but instead has to divide and distract in order to get his goals achieved. He has been remarkably effective so far with this process, but you can see why other people would be constantly frustrated by the young god. He doesn’t give anybody else any credit for anything, which means they’re constantly in the dark and unable to parse what he’s actually up to. There’s something inherently difficult about his character, and it’s setting him up for his own downfall.