Unity presumably forms under a strong leadership, and Powers of X #2 spends its time looking at different forms of leadership and different forms of unity. In the far, far future, “The Librarian” seeks ascension, whatever that may be, and their form of unity is a simple one which feels incredibly complex. Having taken the collected code of all that mutantkind ever was, the Librarian has assembled it into a single existing worldmind – a collective converted into a singular entity which contains multitudes. All of mutantkind is collected together under one force, similar to what we’re seeing in the present-day with Charles Xavier’s attempts to form a single united mutant force which can thrive.

The back of this week’s issue is given over to defining societies as ever-expanding forms of intelligence. You start with a single machine, which has a simulated mind, goals, and efforts. Take ten robots together and they form a hive, an unstable force which cannot survive. Take thousands of robots and you have an intelligence, which works in harmony. As more and more machines join each collective it grows into a more refined form, and it’s a perfect mirror for the developing approach which Moira X has introduced into the X-Men’s core growth. Xavier and Magneto and Apocalypse and Sinister are singular minds, working individually and fracturing against one another: they cannot exist against one another, as they will form natural conflict from their different standards.

If you take the different mutants and bring them together into a hive – for example the classic X-Men team, of the Brotherhood of Evil Mutants – then you see something more powerful but far more unstable. They’ll collapse under their own weight, fight amongst themselves, and damage their own cause. When you start to expand further, however, as seems to be Moira’s plan, then you refine the goal into something simpler, and more elegant – but less individual. If every mutant on Earth collects together in a show of unity, you form an intelligence: a group of mutants dedicated to their goal not to survive, but to absolutely thrive. It’s a distillation – and when you distil something you create something which perhaps more pure, but only because it’s lost something in the process. 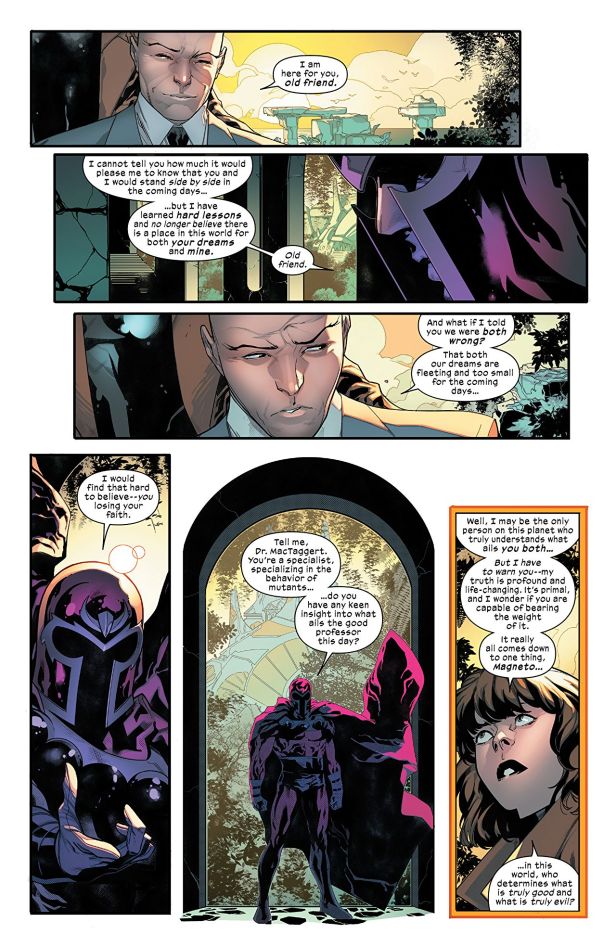 The Librarian’s future is fascinating for the way it boils everything down to a simple, factual status. I’ve mentioned previously how the long-term view of Powers of X leaves actual history irrelevant: when you’re looking at something so huge and whole, it doesn’t matter that Doug Ramsey was shot; that William Stryker called NIghtcrawler a monster; that Storm lost her powers once. All the conflicts and prejudices and difficulties of the past are essentially meaningless when you see what the future becomes, where the general premise of mutantkind exists in the specific memories and coded DNA which the Librarian has curated over time. By building and developing the mutant nation into a collective; a hivemind; a worldmind… you no longer have Wolverine’s claws, Cyclops’ optic blasts, Pixie’s wings: you simply have the worldmind.

Powers of X represents the race to become the highest and most refined form of society. Mutantkind has been merged together by the Librarian for the purpose of ascending to a higher form, but you can see now how the series has worked to take the opposing forces of humanity and the machine nation to mirror mutantkind and form three competing societies which each race against one another, forming bonds – but largely resulting in conflict and war. Humanity wholly exists in a united form: oppressor. Every human in the series so far, including the two who get wiped out by Nimrod in this issue, have the exact same motivation. It’s dull, it’s underexplained: within the series to date, humanity exists to oppress mutantkind.

And machines exist in a united form: aggressor. They exist to destroy, quickly building up minds into a hive and an intelligence and using it to kill and destroy anything which stands against it. In the near future with Nimrod and the remaining eight mutants (of whom there are still members we haven’t seen), we see one of the battles between mutantkind and machinekind. It’s fitting, then, that Apocalypse is the leader of the mutants at this point, with his belief in survival of the fittest. His goal – which would never have worked in tandem with Magneto alone, or as a team with Xavier – is to survive at all costs, and show supremacy. Here his battle is with the machine nation formed up of machines and humans together, and so we see how his role fits into the united mutant front established by Moira X centuries ago. If he were operating alone he’d be dead by now: by being part of this collective, he has finally found a time where his perspective and ambition thrives.

His opposite number, Nimrod, in turn shows the connective strands between machines and humans. This is a Nimrod who acts like a petulant, overexcited child, murdering people who annoy or disagree with him and playing pretend. When readers see Nimrod, they expect to see a mindless murdering robot: the key to this version of the character is that it assimilates what you expect of a machine into the mindset of a human. Again, the unity between the two aggressive allies is right at the forefront of the issue.

That rivalry between the machine/human collective and mutants is shown in the scene most readers will be drawn immediately to. Cyclops, Xavier and Magneto reveal that they’ve found a human collective working out in space. Just as Krakoa has drawn in mutants from everywhere, so the humans are trying the same – not just SWORD and SHIELD, but members of the defunct HAMMER, members of the definitely-Nazi Hydra organisation… the humans have decided to forgo their ideological opposition to one another to form a greater intelligence which can refine into a single purpose: defeating the mutants. Cyclops pledges to stop them, but we’ve already seen that not only do the humans continue on – but that their machines form their own intelligence, merge into humanity, and form an ever-greater society in rivalry to mutants, which almost wipes mutants out entirely. Cyclops fans may not have much to enjoy in coming issues.

But ultimately what matters is the end result: the Librarian, taking everything that has happened across thousands of years and connecting it into a single worldmind. And what does the Librarian have in mind? Ascension into an even grander form: a Phalanx. Powers of X reaches ever higher and higher, and its growth is matched only by its profound loss.