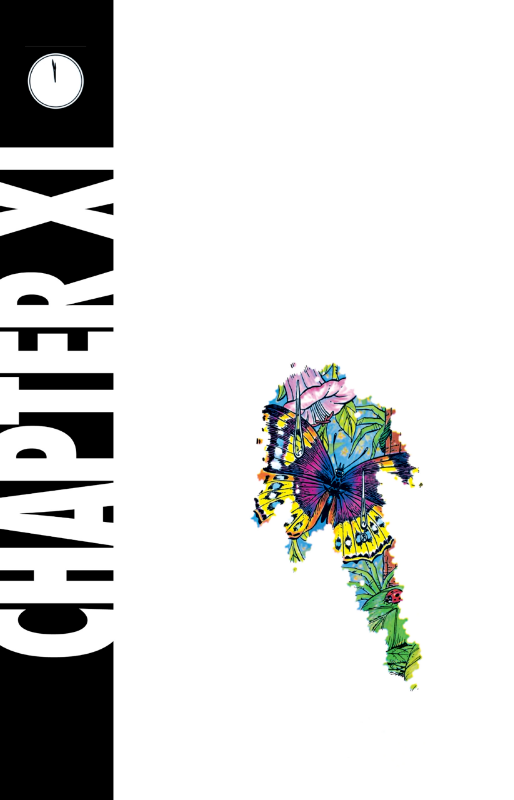 “All This Whiteness”: The Color White and its Representation of Destruction in Watchmen Issue 11

“All this whiteness, I’m feeling sort of exposed.

Up here, we don’t have any camouflage. We’re out of our natural environment.”

White is not the color that one would first associate with Watchmen. Blacks, yellows, and reds might spring to mind, maybe even the soft blue and purple of Dr. Manhattan. It’s true that the murkiness of Watchmen is almost always clearly laid out in carefully demarcated color. And yet, whiteness plays a pivotal role in the visual storytelling of the series.

Throughout the series, white appears in small fragments—in the flash of a camera bulb, in the energy around Dr. Manhattan as he materializes and dematerializes, on blank paper as the artist Ms. Manish sketches out a monstrous figure. The rarity of the absence of color makes it an outlier, its presence almost uncanny, a means to draw attention to a moment. If white in the rest of Watchmen is used to highlight contrast, the whiteness of Issue 11 sets the issue apart from the rest of the series. When comparing every cover of the individual issues of Watchmen side by side, it’s easy to observe just how powerful blankness can be in the vast but cramped visual world that Alan Moore, Dave Gibbons, and John Higgins created for this comic.

The cover of Issue 11 seems to imply a completely separate tone compared the other issues. Most of the page is stark white, completely free of color with only a small offering of nearly swallowed up tropical flowers and butterflies peeking through. It’s a haunting image, one which introduces the idea of white as representative of a destructive force. The cover image is almost directly identical to the second panel of the issue, where we see “exotica” within the Vivarium obscured by the snow outside. It’s a small movement towards erasure, of complete obliteration, one that repeats twice more in this issue, on a larger scale each time it happens.

When Veidt opens the dome of his Vivarium and allows this (colorful) wonder of science that he has expounded upon to be destroyed by the (white) snow along with his aides (whom he has already killed), we get an important glimpse of what he is capable of doing. Though we do not quite understand his reasoning yet, we understand his capacity for calm and calculated destruction. Veidt retreats into his lair and watches as Rorschach and Dan come for him. He presses a button and sits down to eat.

It isn’t until later that we realize there are two separate tracks of time in this issue, which means we don’t see the actions and events as they are happening simultaneously. It’s 11:25 when Veidt is confronted. But its nearing midnight in Veidt’s lair when we find out what happened in New York. Throughout the series, we’ve been following the varying story threads of the regular people who meet, work, and pass by the street. Everything, all of the little conflicts and internal feelings that these characters we’ve seen come to a head in the previous pages.

The emotional drama is high, and so the focus on the flipped side of the city street feels uncanny. Other than the panel gutter and page number (27, for those following along), not a single spot on this first page reads as white. This scene serves as our visual baseline, a concise way for Higgins to establish the norm which is about to be overturned. In these following panels, time both slows down and speeds up. Time passes from panel to panel, but in a way through which we can observe the minute details of what is going on. White begins to encroach on the series of actions — a harbinger for the destruction about to come. It’s important to note here, that without the visual baseline of these dark and rich colors, the use of white on the following page would not have the same effect.

Because on the next page, we begin to focus in on the faces. The confrontations that the book has been building to have stopped, and we are faced with only the way that these characters react to what they see, a visual that the reader never gains access to. The fifth panel of Page 28 is when white makes its first appearance, functioning almost as an anti-shadow being cast over the watch seller’s face. By the sixth panel, white is the primary color cast across the two Bernies as they look directly ahead at the horror.

The next panel sequence follows an inverted movement compared to the first. Instead of focusing on faces, the panels focus on the bodies of the two Bernards as they change from distinct figures, to one figure, to a smudge in the same shape as the image on the cover and the bean juice on the Comedian’s button. The white has transformed the images of people into something we wouldn’t even recognize as human if they weren’t set in a sequence. By the end of the page, white has become the dominant color, overwhelming and then consuming each other images until, in the last sequence, we are faced with a single, fully white panel.

Beyond the constraints of this final panel, lies the famous Shelley quote “My name is Ozymandias, king of kings; Look on my works, ye mighty, and despair!” We are presented with one more Doomsday Clock, still seconds before midnight, as it sinks in that the deadline that we were afraid of was not representative of what we were afraid of at all.

The ending is almost parallel to the ending of Issue 10, when we are also given a fully white panel and a quote. But unlike the tail-end Bob Dylan quote of Issue 10, the Ozymandias tag lies outside of a panel border—the myth that any structure exists now decimated.

The whiteness of the comic book page is all that’s left, and we don’t return to color for the rest of the issue.

Tiffany Babb is a writer, poet and comics critic based in New York whose work has been featured in Panel x Panel as well as Women Write About Comics. You can find more from her on her website here, and follow her on Twitter here!