So now we know who set everything up and was behind Batman Eternal: it was Cluemaster the whole time! Gotham burns below him, and so now’s the time for an extended villainous speech which serves as exposition for what’s been going on over the last year. Don’t hold out for a satisfying ending, though, because there’s always one more villain out there…. it’s Batman Eternal #51!

We find ourselves at the top of The Beacon, where Batman has finally been chained to the Bat-Symbol we saw back in issue #1. Cluemaster is the grand villain behind everything in this series, and prepared everything from the start! His associates are guarding the base of the tower so nobody can get in (because if there’s one thing that’ll stop an angry Batgirl, it’s the might of SIGNALMAN) and so it’s the perfect time for a really extended villainous monologue. First, Cluemaster takes a knight and cuts the logo off Batman’s chestpiece, in the process carving a bloody symbol into his skin beneath, ew. He then cuts off the rest of the outfit for… reasons.

He asks if Batman remembers him, which of course Batman does. Bats doesn’t believe that this is something Cluemaster put together himself – that there must be more going on here. As Cluemaster cuts off the mask, however, there is a certain power in the character being able to find out who Batman really is – it’s apparently a surprise to him. Cluemaster keeps cutting off pieces of the cowl and throwing them off into the wind, gloating as he does it. It’s impressive, but also deliberately kinky.

In the city, the Bat-Fam are distracted by all the civilians who need rescuing, and Julia is panicking because she can’t keep control of the situation – there’s too much stuff going on all around her, and it’s overwhelming.

Over at the Egyptian, Catwoman is watching Gotham burn. Her various associates all think they should head outside and start carving up parts ofthe city for themselves, but Catwoman isn’t so keen. That makes a lot of sense, because I have literally no idea what “carving up the city” actually means. It’s something villains say all the time, but what actually happens once you step out your front door? Do you start drawing a chalk line on the ground and everything on your side is now yours? Do you use tape? Catwoman isn’t into it anyway, and she hurls a whip round her back-talking associate and drags him across her table to remind him who the boss is.

Back at the tower, and Cluemaster is definitely dragging out his moment of triumph for way too long. He’s put his google on that have “Clue” written on them, he’s enjoying the view, he’s going everything but complete his victory. He talks about how Batman is always so invested in huge conspiracies and major events that all it would take is a distraction and minor villains would be able to take over the city before he could do anything about it. As he speechifies, Batman starts pulling a wire out of his sleeve. 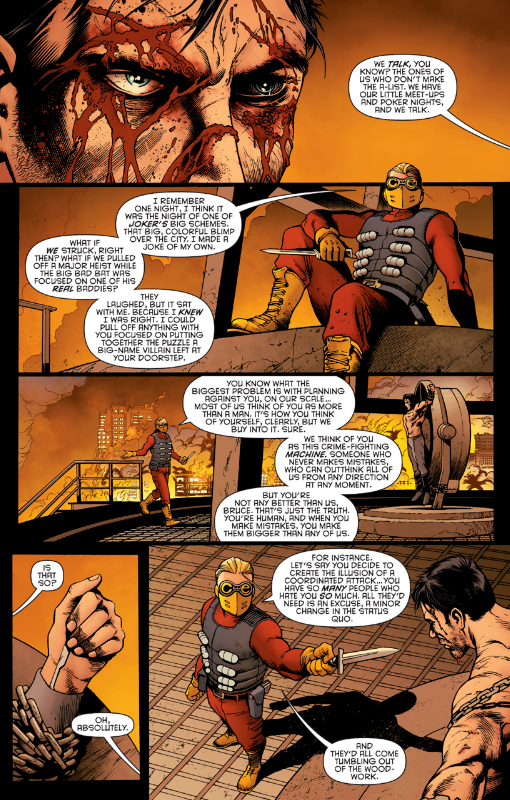 Cluemaster’s big plot was to frame Jim Gordon – from there, all he did was send invites to all the main villains and leave them to do whatever they wanted. By having Hush and everyone else carry those cards, it left the impression that there was someone major behind everything, so Batman constantly looked higher and higher up to see who was plotting – when nobody was there, just Cluemaster. As he wraps up the exposition enough to leave the reader satisfied they understand what’s been happening the whole time, Batman is now able to free himself, and he smacks Cluemaster right between his stupid goggles.

At GCPD, Gordon is back in the office and working with Bard and Bullock on their plan of attack. They’ve got all the ordinance they need, and so Jim and Harvey start to head out and get to the streets. That makes Bard panic about what he’s meant to do, and that leads Jim into a long, Scott Snyder-inspired speech about what Gotham is. The purpose of the speech is basically to say “do your job, Jason”. There’s either a heroic sacrifice coming up or Bard is going to walk out of this story completely redeemed, isn’t he?

On the streets, Harper row is having a brief rest after saving a little girl from the fires. Stephanie Brown rides over at that point on her bike, but says she’s not here to help out the civilians – she’s packed her bags and she’s leaving town. What? That doesn’t make sense for her character, surely. Harper is similarly unimpressed, but she’s also not got the time to listen to Steph’s excuses and moaning, which makes a first for the series and a truly welcome change of pace. Steph tries to reason her way out of it, but Harper basically just walks off and leaves her to it.

Batman’s escape continues apace, as he bashes Cluemaster about and smacks his head into the signal. Down below, Cluemaster’s associates are all gassed mysteriously, which takes them all out and grants a secretive figure access into the building. If there were any sense to the series it’d be Poison Ivy, but I have the suspicion we’re not actually going to see her again.

Cluemaster is actually enjoying the fight, because this is a real kinky series, but because Batman is so tired none of his punches have done that much damage. Cluemaster gets up, throws his own punches, and knocks Batman down to the ground victoriously. He then draws out a gun and prepares to shoot the guy, which he should’ve done ten pages ago. As he pulls out the gun he looks for a triumphant final line, which is how you know he’s about to get snuck up on by someone else and taken out. Annnnd….. so it proves, as somebody comes out the shadows, slits Cluemaster’s throat, and advances on Batman. Cluemaster gets out some variation of “curses” before he dies, the poor idiot. Braggers never win.

The new final boss walks over and reveals himself as being Owlman, Batman’s brother from Scott Snyder and Greg Capullo’s run on Batman. It’s hugely underwhelming, yes, and somewhat forced. Cluemaster as final villain was interesting, but now this random extra guy has basically just popped in and said “it’s not important what happened in the previous fifty issues – I’ve done nothing to earn this, but now I’m here to be the final villain in this story”. Maybe he should’ve been called The Cuckoo or something if he was just going to steal someone else’s story. Anyway! Check back next week, because the pretty inevitable conclusion of Batman Eternal is almost here!

ONE MORE ISSUE TO GO!!