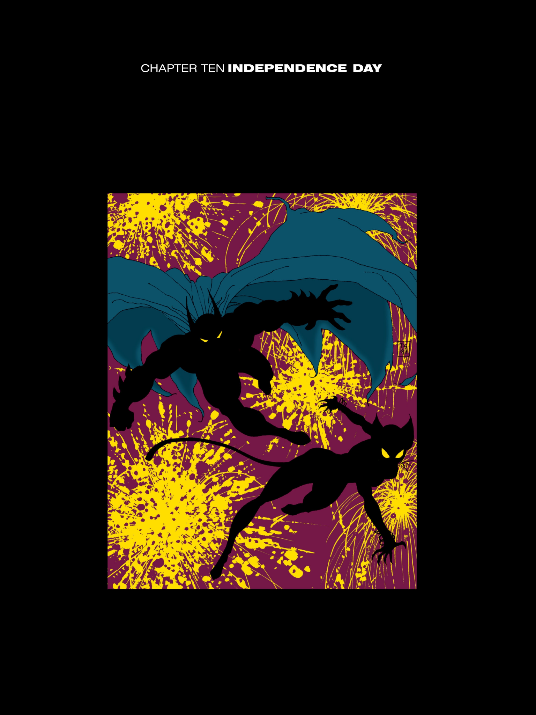 Holiday gets his business out the way early this month, shooting and killing the Gotham City Coroner right on the first page of the issue. If you’re a long-term reader of Jeph Loeb stories, you’ll probably have an idea why the killer would want to silence the man who knows which bodies are or aren’t currently in the morgue – but the citizens of Gotham have no idea what’s going on. Batman and Jim Gordon meet at the scene of the crime to try and establish why somebody would kill a civilian.

Whilst there, Gordon quietly raises his suspicions about Batman, and in return Batman asks questions about Harvey Dent. These three characters came together at the start of the story, but now they don’t trust each other at all anymore, and their teamwork has collapsed into suspicion and accusation. Note how the series has stopped putting all three of them in the same room at once for any substantial period of time – instead we get a scene with Batman and Harvey Dent, and then a scene with Batman and Jim Gordon. They’ve fragmented, and it’s highlighted by their inability to even get in the same room anymore.

When Harvey lights the Bat-Signal a few moments prior to them finding out about the coroner’s death, the reluctance from both men in their conversation is fascinating. Harvey stumbles into an apology of sorts, but he reinforces it with declarations that he will personally make things right and sort everything out. In turn, Batman has a huge sulk on, and he’s unable to mask his fury at Harvey’s dead-end investigation into Bruce Wayne. Having a long story like this means that we get to see a little bit of continuation for the characters, and it’s entertaining to see Batman continue to hold a grudge against the people who ruined his Mother’s Day.

On that track, the issue ends with Batman getting his first victory in quite some time, as he takes out both The Mad Hatter and Scarecrow with the assistance of Catwoman. It’s a cathartic moment for the reader… but that’s nothing compared to how much relief and joy Batman takes from getting some measure of revenge specifically on Scarecrow, who dosed him with fear toxin months ago and caused him to hallucinate about his parents. These little reminders of previous issues help raise the stakes, because we’re getting to witness cause and effect within a single whole narrative. Batman was “violated”, and now months later he gets to punch Scarecrow up a bit.

It also ties both the villains to Falcone, as they’re caught after bombing Gotham Bank and physically taking the money out. That’s not a scheme which plays to either of their strengths (unless they used explosive tea bags?) and quite rightly they’re soundly beaten and captured by the heroes as a result. It speaks to the idea that they’re being mishandled by a rich benefactor – Falcone – who doesn’t grasp the real power balance in Gotham. He wants money from the bank, and so they just go along with whatever plan he cooks up for them. They act like freelancers, distracted from doing what they actually want to do, so it’s no surprise that they don’t put up much of a fight when they’re found by Batman and Catwoman.

Last month I said that it was disappointing how Catwoman only gets some development when Batman is around, and this issue pointedly demonstrates it. There are a pair of scenes here where both Selina Kyle and Catwoman make the same offer to their romantic interest, only to get shrugged off. Near the start of the issue, Selina suggests the Bruce that they could drop everything else that’s been going on, and all they’ve each been through, and invest in each other instead. The offer is as good as rejected as soon as Bruce sees the Bat-Signal over her shoulder, though.

Then, at the end of the issue, Catwoman makes the same offer to Batman, who this time sticks around long enough for her to realise he’s never going to be distracted from his work as a vigilante. She’s playful and open; he’s one-minded and closed-off, and it’s what attracts them to each other and means this just isn’t something that can work at this point in time. It’s hard to work out if this is a reaction she’d had since Father’s Day, when she saw Falcone reject Sofia’s present, and if that’s just made her tired of all the subterfuge and drama of Gotham. It could be that she’s lying to both Bruce and Batman, but one defining point of character for her in The Long Halloween is how often she’s told the truth. If DC ever published a series telling this story from her perspective, it could be fascinating.

Another lost perspective is that of Barbara Gordon and Gilda Dent, who get a scene here which literally intrudes on their private conversation about their husbands. Tim Sale starts by sneaking us in through their kitchen window, where we see the two women discussing their lives – or lack of. Loeb tries to turn their lack of development INTO their development, to mixed effect, but at least it means we get some kind of character arc for them both. Gilda, especially, gets a lot more personality and spark than she’s had before, where she seemed to just be the meek wife to Harvey Dent. Here she’s aware that Harvey’s crusade is damaging him, and she starts stoking that same fear in her friend.

A little independence is a good thing, perhaps, and it’s a concept which the characters obviously keep returning to. Selina and Harvey both suggest just leaving Gotham for a while, and escaping from the place. Gilda questions her loyalty to her husband, and the trio of Harvey, Bruce and Jim all seem to be distancing themselves from one another throughout the course of the year. The only twist is with Sofia Fatale, who visits Maroni in prison and kisses him – revealing that they’re a couple. She asks Maroni why he chose to break away from her and betray her father like this, and tries to convince him to do something to Dent in order to help the Falcone family.

Given that August doesn’t have a major holiday, the only major event coming next month is Carmine’s birthday party – the scene between Maroni and Fatale leaves you wondering what kind of presents he might receive. For an issue which is all about characters drifting from one another, it’s interesting that the gangsters seem to be trying to reconcile and get closer together.

So I’ll see you in August for Carmine Falcone’s birthday!