With villains everywhere, Batman systematically works through each one of them as he tries to find out who the big bad was behind all the chaos of the last fifty issues. Was it a major villain? No. Was it a huge conspiracy? No. Were the clues right there the whole time? Not…. really, but the issue is going to pretend like they were. Here comes the final boss reveal – it’s Batman Eternal #50! 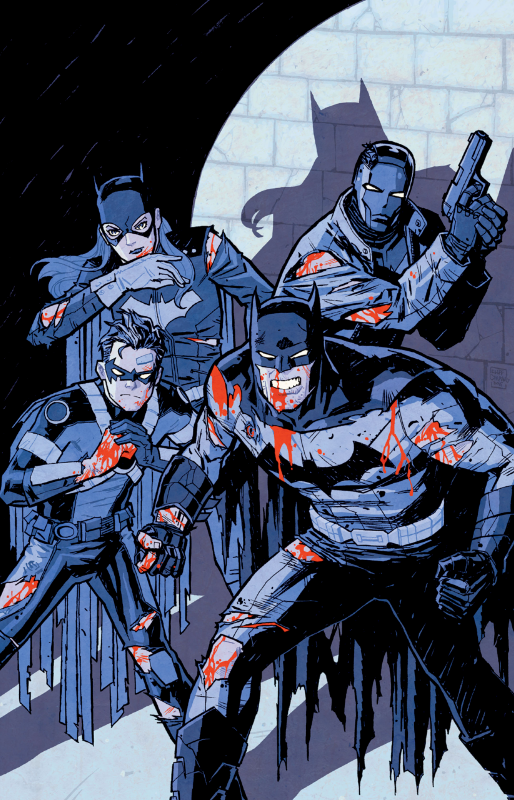 In the ruined streets of Gotham, Batman has just flown a full fighter jet into Bane, who has been completely wrecked by the collision. Coughing up probably the last venom still running through his system after he previously got wrecked by Killer Croc, Bane looks up and sees Batman standing over him, totally un-wrecked and looking fit as a fiddle, considering he’s been in two massive plane crashes within the last half hour. Bane does his best attempt at villainous banter, but gets kicked in the head and knocked out for it. As Batman recovers his breath for a second, Red Hood walks over and thanks him for helping out. Have to say, this was the most outmatched of all the fights, so Batman chose well for his first action in Gotham. Hood checks in on if Batman is doing okay but Bats is more concerned about what his next target should be. He leaves Red Hood behind to make sure Bane is actually knocked out, and heads off for the next supervillain he needs to beat up.

At Blackgate, the riot is still going full flow, but Jim Gordon has been having a lovely time sat in his cell, reading a book by himself. Harvey Bullock and co show up to see how he’s doing, and really he’s just annoyed he hasn’t had time to finish the final chapter. The sacrifices he has to make! After a frosty greeting to Jason Bard – does Gordon know Bard is evil? I can’t remember – Leo then walks in, which shows a clear inability from the police to protect their perimeter. He’s smoking a cigar and everything! Leo explains that Penguin was behind the riot, which we all know, but what is surprising is that Penguin is currently racing out of the prison on a boat piloted by Killer Croc. Wasn’t Penguin a captive of Jim Gordon’s only last issue? How did this happen?

At Gotham Cathedral, Hush’s intervention means that Batwing is struggling to keep up with Scarecrow. So much, in fact, that Scarecrow gets to have a full-on villainous monologue about horror and fear and how great it is that his drones are going to make everybody scared. Just like with Ra’s Al Ghul, it’s all a bit tired really, isn’t it? The drones all show up back at the cathedral, though, with Batman riding them like some kind of jet ski – he then deploys their toxin onto the cathedral at once for some reason – I know Batman has a gas mask, but Batwing doesn’t! Scarecrow runs off, to be collected later.

Next we head across to the batcave, where Julia and Alfred are trying out their codenames on each other, which is weird. Julia notices that another villain has just shown up to cause problems – Firefly. Which…. means he wasn’t the one who set Gotham on fire previously, when Julia landed in the harbour and saw the city had been exploded? All sorts of minor issues are also going wrong, which suggests that Cluemaster and Signalman are getting their hands into the system too. There’s also a rat problem, so Ratcatcher is also doing… whatever his thing is.

Batman has apparently wrapped up Scarecrow, because by now he’s taken out Mr Freeze – another smart move, because Harper shouldn’t really be on his level yet. He picks up an electric cable and runs a massive amount of voltage through Victor’s suit, which Harper notes is serious overkill. Apparently it’ll all be fine though, so don’t worry about it. No murders, promise! Just severe injuries. Batman, always practical, helps himself to some of Victor’s weaponry before moving on to Clayface, who notably is always defeated by getting frozen solid. So it proves here, as Batman freezes him up just before he’s able to kill Red Robin. Batman, you got here too early!

The last villain left would presumably be Joker’s Daughter, but Batgirl shows up like “didn’t need your help, beat her myself” and dumps the villain’s unconscious body on the floor. Seems like that must’ve been quite therapeutic, in a way. Nice to see there’s at least one member of the team who doesn’t need constant hand-holding to save the day. She gloats a bit though, which winds Batman up and leads to them both getting a bollocking for letting the city get destroyed. They head out to help the citizens, and in this brief moment of downtime Batman throws a complete paddy about having failed to work out who was behind everything. He’s checked everything, done all the detective work, and totally failed here.

That’s when Alfred gets on the phone to let him know that the villain is now openly taunting him, demanding that Batman head over to the Bat-Signal set up at the top of Beacon Tower. It’s obviously a trap, but Batman is so annoyed that he couldn’t solve this mystery that he’d happily get himself killed just so long as he can finally find out who was behind everything. He grapples across to the tower by himself.

Meanwhile, the coppers leave Blackgate prison together and find the city is on fire and basically destroyed and ruined. Bard is all cowardly and defeated, but Jim Gordon sees the fire and it like “okay, let’s get to work then”. Good ol’ Jim!

At the Beacon, Batman wanders round in the darkness, and is greeted by an unfamiliar voice that taunts him. The final villain is here! Who will it be? The guy taunts Batman about having failed to work out who was behind everything despite the clues all being laid out for him. As Batman demands to know spoilers, he gets tased about ten times and taken out. That’s when the final, big bad villain shows up and reveals who he is: it was Cluemaster all along. Batman was too busy looking at the bigger picture that he never thought he might be shown up by a small-timer!