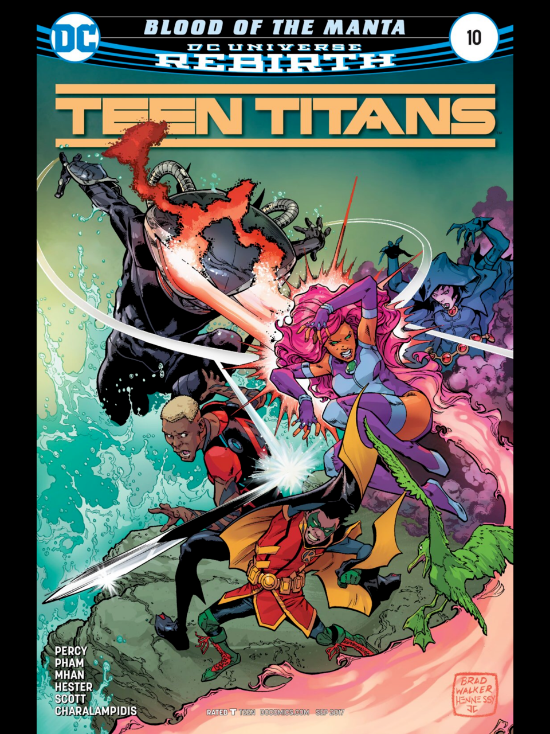 Superheroes that exist in both the realm of comics and television generally have overlapping qualities between the two mediums. Batman will always be a stoic gruff who rarely smiles; Wonder Woman will always be a powerful warrior who points out what’s right and takes charge, and so on. Sometimes, though few and far between, there’ll be a character that’s very different from who they are between screen and panel. At that point, a company can either choose to let them be similar but different – or try to bring them between a happy middle ground. Marvel recently found themselves pursuing the latter option with the success of the Black Panther film, giving T’Challa’s sister Shuri her own comic to help her mirror the version played onscreen by Letitia Wright.

What happens when you take the former route? The result is the DC Comics character Aqualad, a boy who has yet to achieve any sort of unity or cohesion despite existing for nearly an entire decade.

Aqualad arrived in 2010, an original creation for the animated series Young Justice who was also known as Kaldur’ahm. Though the show would debut in November 2010, his true first appearance was some months prior, in Geoff Johns and Ivan Reis’ Brightest Day #4. Like Kaldur, this Aqualad (albeit known as Jackson Hyde) had control over water and intricate tattoos over his arms. Beyond both versions sharing a similar costume and Black Manta as a father, there wasn’t anything linking the two together, mostly because Jackson disappeared almost immediately after he showed up, not really making a splash until 2016’s “Rebirth.”

In the pages of the new Teen Titans book, Jackson suddenly returned after disappearing for years, now looking more like Kaldur than before and, unlike his small screen doppelganger, gay and confirmed as such in Teen Titans #10, the second part of a short arc wherein he meets and comes out to his father during a hunt for undersea treasure. Manta’s apathy towards his son’s sexuality on its surface seems refreshing – but even years after the fact, it’s a coming out moment that feels messy and ironically winds up underlining just how weird of a character this particular Aqualad is.

Jackson’s able to come out on his own terms, which feels like something of a rarity in and of itself, moreso that he does it in the middle of a book rather than at the very end. But as seems to be a common trend among the Teen Titans in recent years and their queer members, Jackson comes out and then just drops off the face of the Earth after his Titans team were recruited by Brainiac in the subsequent Justice League: No Justice. Like with Bunker during the Titans’ much maligned New 52 era, he’s since been “replaced” by Lobo’s daughter and fellow queer, Crush.

The unique oddity that is Aqualad continues on the screen with Young Justice. In the build up to the show’s return earlier this year, showrunner Greg Weisman hinted that the show would show LGBTQ characters now that it was on a platform with less restrictions. Even before Jackson’s arrival in Teen Titans, the show’s fandom generally assumed that he was either if not gay, then bisexual given both his attractiveness and love for the now dead Aquagirl; if he wasn’t shipped with her, Rocket, or Artemis, it would be with Red Arrow or Superboy. Halfway through the third season, though, the show has yet to really dig into his personal life the way it has his fellow heroes. The only thing that can really be said about him currently is that he’s the new Aquaman, but we know nothing of his personal life in the two years that have passed.

Really though, this is all dancing around the bigger problem which is that WB and DC likely never had any real plans for Aqualad to begin with, or at least no long term ones. He was likely just intended to exist in the world of Young Justice, but the show’s cancellation and their passionate fanbase forced them to take out a horse they were never thinking of letting out of the stable. As a result, you have an Aqualad in a show that doesn’t use him as much as they should, and one in comics desperately in need of real character development, which may come with Alex Sanchez’s graphic novel presumably next year.

In continuing to keep Kaldur and Jackson from meeting some sort of consensus as so many other characters have had, DC and WB are creating a schism between the two that’ll grow the more it’s unaddressed. With both their stories being about growing into one’s self, it would be easy to explore either of the two realizing that they are bisexual and prefer men, or for Kaldur to discover he’s gay during the course of Young Justice. Men of color don’t really get a chance to have an exploration of sexuality in media, but if it were possible for anyone, you’d think it would be possible for the boy with webbed hands and the power to create water dragons.

Justin Carter has bylines at a number of major websites, including CBR, IGN and Polygon. He’s currently very prolific writing about gaming over at Twinfinite, and you can also find him on his twitter page here!