In the summer of 1986, I was stressed. I had a job with a national student newspaper organization lined up for the fall, but couldn’t decide whether to base my office in Edmonton, where I lived, or in Winnipeg, where the office had been situated. After that, should I aim for the job that would take me to Ottawa, or the job that would take me to Toronto? While these doors of opportunity were open to me, one door had already closed: the door of my long-time local comic shop. According to my journal, the shop ceased operations without warning. “Taped on the glass was a piece of print-out with dried felt scrawled on: ‘CLOSED. GOODBYE.’”

In contrast to my uncertainty over work, I was certain about the need to find a new comic shop. The timing was actually good. My taste in comics was changing. I had followed a conventional Generation X path of comics readership, graduating from Gold Key and Archie comics to Marvel and DC superhero comics. However, I had been tiring of the proliferation of X-Men variations and bored of the static DC universe until Crisis on Infinite Earths shook up my expectations of what could happen company-wide. At the same time, creator-driven indie comics were becoming accessible to me.

“I am no longer a nerdy teen comic reader,” I declared to myself in the journal. “I am an adult comic reader. I read Watchmen, The Dark Knight and Beanworld”.

This explosion of post-modern and sincere indie comics in 1985-86 undid me as a reader like the explosion that disintegrated Jon Osterman before he put himself back together as Dr. Manhattan in Watchmen. Watchmen in particular felt like the future of comics, with stories that explored the grim consequences of characters’ problematic pasts, and the art did not shirk from realistic violence, male nudity, or less than ideally heroic scenes. It also shed light on my future as a comics reader. The series was perfectly suited for long-time comic-book readers, ideally those who had read Charlton Comics (I was too young to have read those, but it felt grown-up to just know the reference).

As I was aging out of the traditional readership years for superhero comics, I could see that I was also part of a generation that would be reading such comics well into adulthood, with the advantage of being able to draw on decades of backstory. I was already a fan of Ambush Bug, which was as silly as Watchmen was serious, and the metanarrative and self-reflexive aspects of reading these texts set up my future appreciation of other comics that commented on comics and played with reader expectations, such as Legion of Superheroes‘ Five Year Gap storyline, Vertigo Comics’ Sandman, and Wildstorm Comics’ The Authority.

The best single issue of Watchmen was its fourth, which was published a few weeks after my declaration about being an adult comic-book reader. With a story entitled “Watchmaker”, Watchmen #4 powerfully proved that comics can do things that no other storytelling medium can. Artist Dave Gibbons and writer Alan Moore used echoing visual tropes, physics theory, and the nine-panel grid itself to show and tell a story that takes place over decades, and yet all at once.

Typical of Watchmen covers, the cover of #4 gave nothing away. The title ran sideways against a black column on the left, and the main image was bold, colourful, but enigmatic. On Watchmen #4, the main image was of a old black-and-white photo, of a non-costumed couple enjoying a night at the fair, resting on purple sand. It turned out that the photo depicted Dr. Manhattan’s life from before the tragedy that gave him superpowers. 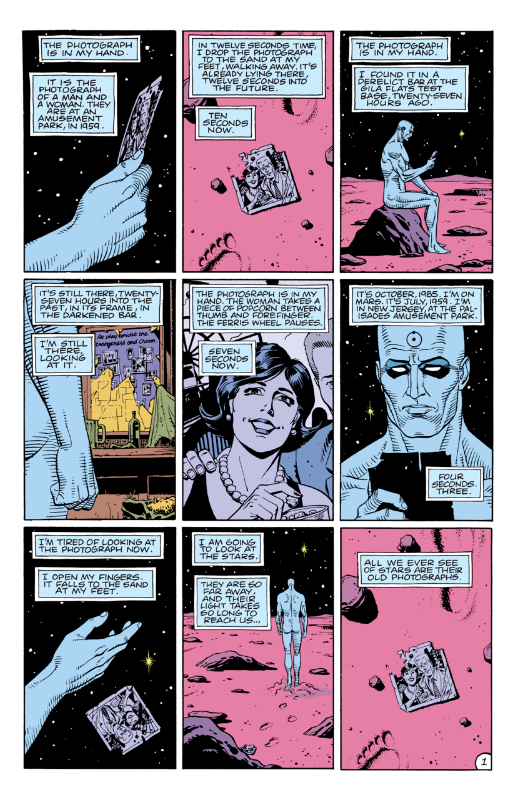 I realized that this issue was going to be different from its predecessors when I noticed that the first set of panels seemed to be out of order. The first panel is a close-up of Dr. Manhattan’s hand holding the photo. In the second panel, the photo is already in the sand, echoing the cover image. The third panel shows Dr. Manhattan sitting on a boulder on Mars, again holding the photograph. The sequence was deliberately non-linear. Dr. Manhattan was experiencing a sequence of events as if they were happening simultaneously and in parallel. In the narration, Dr. Manhattan says, “In twelve seconds time, I drop the photograph to the sand at my feet, walking away. It’s already lying there, twelve seconds into the future. Ten seconds now.”

“Watchmaker” was the result of precision storytelling by Moore and Gibbons. To trace the echoes and ripples of events in the story, I found myself flipping backwards and forwards between passages, including the back matter, which is made to look like an excerpt from a book about Dr. Manhattan. This and other supplemental texts in the single issues of the original Watchmen comics made its fictional world seem all the more “real”, like we were holding a piece of documented history in our hands.

Re-reading Watchmen #4 in 2018, I was as amazed by the issue as I was in 1986. Ironically, as I write this piece I’m facing some of the same flux I did back then. Just as I began planning another move, I got word that my comic shop was closing, followed by an announcement a few days later that it had been bought by new owner and will remain open. Phew – I won’t have to find a new comic shop! I’m already flashing forward and looking back on this moment of stress that will eventually pass. I see myself in my future home re-reading Watchmen #4 again, holding this single-issue snapshot in time like Dr. Manhattan held that photo. I might be in a new apartment, or a new house, or on the beach.

Wherever I am, I promise I won’t drop Watchmen #4 in the sand. I’m writing it in my journal now.

“Sequential Tart” Suzette Chan is a blogger who has been writing about comics for years. More recently she’s been writing her own arts and culture blog called Art City, which you can find here. You can also find her on Twitter here!

One thought on “We Watch The Watchmen: Suzette Chan on Watchmen #4”