Harper Row and Stephanie Brown have both been through a lot during Batman Eternal so far, but there’s way more coming before they’ll get to put their feet up and have a nice cup of cocoa. Jervis Tetch still has to be foiled, and Steph’s family problems are getting worse and worse – it’s Batman Eternal #42! 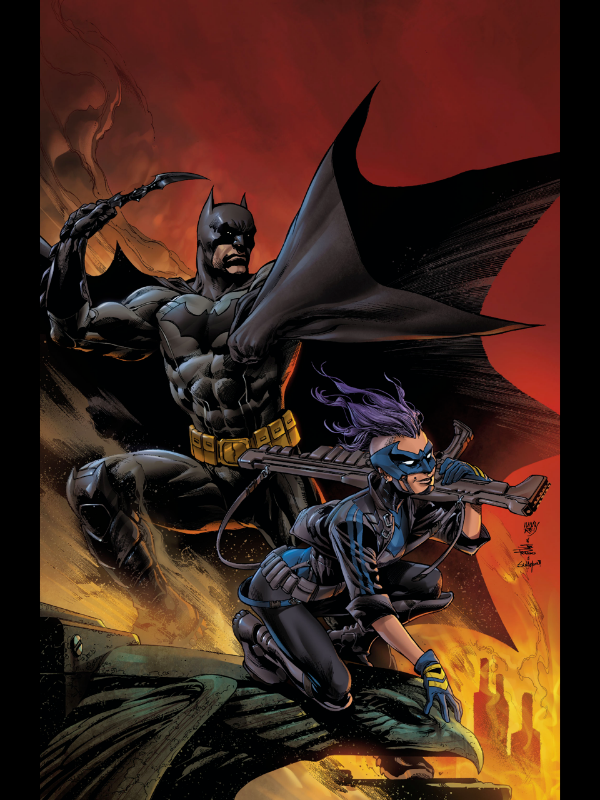 Jervis’s nanotech army is growing by the second, with hipsters across the street of Gotham all suddenly possessed by his little robots and heading over to his factory to lend a hand with the work he needs doing, whatever that might be. Flanked by Red Hood, Batgirl and Red Robin, Tetch looks on proudly, this being the first time one of his plots has come even remotely close to working. In the background, however, somebody is busy replicating the cover to Batman: The Dark Knight Returns, only they botch the landing and crash down onto a nearby rooftop in a dusty mess. It is, of course, Harper Row, dressed up to the nines and still working on her superhero landings. She starts taking dictation – which is a handy way for her to explain her plan for readers when she’s not really got any reason to. Apparently her outfit creates a shield which blocks out nanotech, so she’ll be able to sneak into the factory and shut it all down. In theory.

Elsewhere, Stephanie Brown wakes up in her childhood bedroom I think, and finds her mum waiting for her in the doorway. Remember how her mum is evil, yeah? Don’t forget that bit. Mum tries to be all friendly and says “we just need to have a bit of a chat” whilst wearing her trackies. It’s very mum behaviour, but she then tries to pivot her whole deal to pretend that she was also scared of Steph’s dad, and that she was planning to escape from him but never had the opportunity. Apparently she hired the assassin last issue (called Killshot, even though he uses bolas rather than a sniper rifle?) and now everybody is safe forever and nothing will go badly from this point onwards. Again, I repeat, she’s clearly evil, she’s Dolores Umbridge after a pilates class.

Harper Row races into the factory and heads over to the big shiny pylon thing. She then wonders the same thing we’ve all been wondering, which is “so what do you do at this point?” Get attacked by some randos in polos, it looks like, as three kids vomit over some robots at her… which bounce off her outfit. Annoyed, the robots swarm up and physically bat her off the balcony, where she falls three floors, smashes through a table, and then gets right back up like nothing happened. Tetch spots her and advances, saying something about her having strings that need to be laced up or whatever LSD nonsense train he’s on nowadays. She ignores him, however, because her brother is in the crowd – racing over, she tries to escape but instead gets bopped by a cheap shot sucker punch from the nanobots. 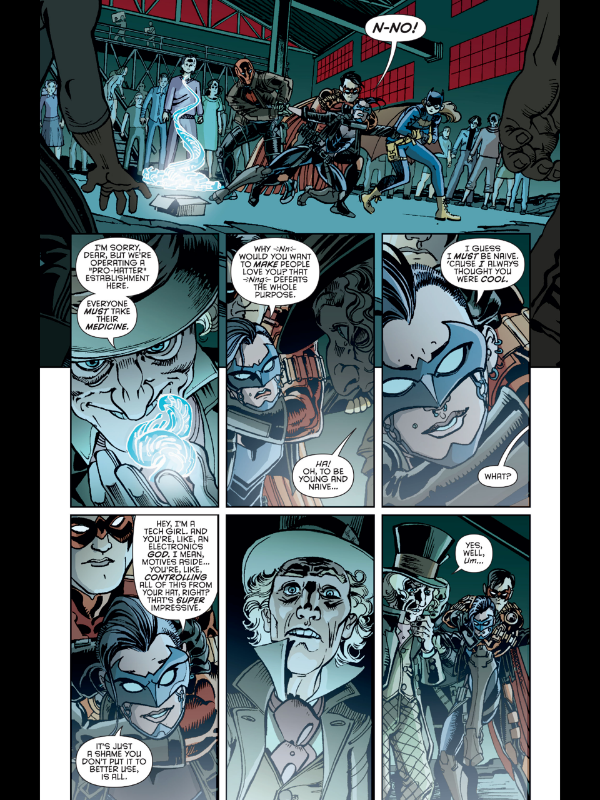 The Bat-Fam grab her and hold her hostage whilst Tech prepares to force-feed her some robots. She switches tactic and decides to flatter Tetch instead, which immediately works because of course it does. Whilst he contemplates his ways for a split second she kicks him in the face, knocking his hat off – he really needs to do a better job of keeping that thing attached, because his plans always fail due to the loose fit. Harper tasers herself, which is a nice callback, and also electrocutes the three heroes who were holding her. She picks up the hat, does a quick hero pose, and then uses it to blow up the pylon entirely.

The Bat-Fam shake themselves back to consciousness, Cullen wakes up, and Harper gives him a big hug, aw. Tetch prepares to escape but is greeted by the sight of Batman smashing through the remaining skylight and landing on him. He engages in some brief assault before finding that Tetch has another one of those “you are cordially invited” cards in his jacket pocket. Again, he’s just another one of the minor players here, and not the lead villain. After a quick chat with Red Robin where he finds out Harper was the one who saved the day, he gives one of his sharpest “hm”s and then grapples back out the room.

Later on, Harper and Red Robin have a sit down on a rooftop and work through how their day has gone. She was worried that Robin would be mad at her for getting a superhero costume and saving the day, but he says that this was all his fault – that he was the one who set things up so she had no choice but to become a superhero. I wonder if Batman is listening in on this conversation. Harper waves off that approach, saying this was all her choice and that she made it herself and also, y’know what? Girl power, Tim.

At her house, Steph is getting used to being home with her mum, whom I am still convinced is totally evil. She’s not that good with security, though, because Steph walks downstairs to find her mum tied up to a chair and captive. Before she can find out what’s going on, she gets chloroformed – her second capture in two issues. This time, however, it’s Catwoman doing the capturing. She’s got something more in mind for Spoiler.