Page 1:
Esther asks if Susan and Daisy are going against a firing squad because they are scarfing that food down like hungry, hungry hippos — as if enjoying a last meal, as condemned prisoners were allowed in the days when the state (or the military) still put (their own) people to death. The food is “only a placeholder for actual meals” because cafeteria food is, traditionally, plastic and bad. Just ask Jamie Oliver!!

Esther prefers to scrape end-dust out of… a peanut butter jar? This is because she is light on cash. “Making it go further,” is what she is doing. I think it’s Nutella!!

Page 2:
Nice bit of lettering from Mister C here. Susan’s lines are not only smaller and paler, they’re also in a bubble with a wobbly tail! We understand, therefore, that she is trying to avoid being heard, and is uncomfortable with what she is saying.

Page 3:
“Oh my lore” is a bucolic way of saying “oh my lord.” Swapping “lord” for another word makes it clear what you’re saying but makes it less blasphemous (much like “heck” for “hell”). It’s old-fashioned by nature, but still said in plenty of places. Esther seems to be using it in a bit of a Victorian mode, though, as she asks if Susan’s dates are “from good families.” People also still think this way, but Esther wouldn’t say it unironically.

Swiss watches are the best watches. They just are. I don’t make the rules. Neither does Johnny A.

A Casio can be a watch (or a calculator, or—); it’s a Japanese brand. A Tissot will be a Swiss watch; a luxury brand. At a loose estimate, the Tissot will probably be around ten times the expense.

Page 4:
“Slimfast style”: according to the Slimfast programme of meal-replacement shakes. ACK-chewally Slimfast recommends two meal replacements and one balanced meal, and I think always did, so really one of these dates should be… I don’t know. Just alone? With McGraw? I don’t know. I shouldn’t have made trouble.

What the flip is a band-aid? Do we need to start bringing in Yanks to explain where Boom’s editors have changed the language on us? It’s called a plaster! Don’t you give me your band-aid bluster, Boom.

£3.50 a week is not much. It’s much less than Jobseeker’s allowance, which we can assume, whether from experience (me!) or observation, is not enough to have a nice time. Save the Student dot org has a 2018 “challenge” to live on… just ten pounds a week still listed, for further example. Or, if we prefer the BBC, “With careful planning, an adult could spend as little as £12 per week on a healthy, balanced diet, says Tom Sanders, a professor of nutrition at Kings College London.” Esther’s in the ditch.

Page 5:
A bus driver will NEVER HAVE CHANGE. If you try and pay a bus driver with paper money that’s higher than the amount your ticket requires, they will probably have to issue you some of your change in bus-ticket promise form. They print out a little IOU. You take it to the bus office and they turn it back into money. I guess they get robbed a lot, or something.

These old ladies provide us a picture of the potential future Ingrid-and-Daisy before they even became it.

Page 6:
“You… and me… dancing” is a reference to the song by Los Campesinos. They were going to be a major deal musically until… they just weren’t?

Esther would totally get the KonMari method, even if she doesn’t use it. Look at her thank those garments! A girl full of soul.

Where is McGraw??? Probably not in an opium den. We don’t have those any more, even though they’re easily romanticised. We just have heroin, and morphine addiction.

Page 7:
Shearing forces are powerful, concurrent, oppositional blows on one object in different places. Like if someone pushes your head left and your body right, your head might just be “sheared” right off. Yeah? A dovetail joint is when two flat pieces of wood have their ends cut like trapezium crenellations (so the teeth remaining look like dovetails), and then those two pieces of wood are placed, tailed-ends together, at an angle, so that the two cut ends fit together and hold fast. You’d know it if you saw it.

Page 8:
A “zero hours” is when you have a job but you don’t actually have to be allowed to do the job, so the people who “gave” you the job don’t have to pay you… but the government can say “look! They’re employed!” and feel smug.

Egg coffee is real but like so are a lot of things, man, and we don’t have to encourage all of them.

Page 9:
We know it’s Daisy talking not only because she’s there in the panel, but because they speech captions are that lovely pale pink, to complement both her gentle nature and her gentle hoodie.

Golden Delicious and Pink Lady are both apple varieties. I don’t know if they have them everywhere!! So I’m telling you, in case they don’t.

This guy is one of my favourite Giant Days incidental characters. So wise.

Page 10:
International students having firm opinions about what is wrong with the country they’ve come to study in is very common, I think. I guess the confident people take the opportunities to study abroad, and so what might be observed by many ends up spoken by the present few?

Ingrid begins by inconveniencing Daisy, and then running roughshod over her senses of comfort, authority, and propriety. Ah, ah. Ignorance and generosity tend the graze. Who can argue with those? Ah, ah!

Page 11:
Susan date the first: moustache-haver. Plaid shirt wearer, like a carpenter. Going straight for the image of the past! Susan herself recognises this mistake. McGraw’s charms were deeper than the ones he wears on top.

The cheese board seems to include a giant finger? Looks disgusting. But the grapes are plump, which is a must.

Page 12:
Daisy, overwhelmed, has retreated into the romance of the issue: the opium den.

Ingrid has written “titten” on that van, which means “tits.” That’s the one fact I learnt on German exchange. I’m not even joking.

Page 13:
Danger Nebula is a pretty legit comic shop name, with just enough elaborate “this refers to nothing” about it to be clear that it’s a joke about the same. Not a mean joke. Just… a joke.

Page 14:
Daisy! There’s danger in them titten! Swayed by danger, like all girls at one point or another.

If you google “Stockton-On-Tees” the list of “things to do” includes a museum, a country park, an “Institute” of modern art, and a regular park. It is a market town in County Durham, which means you should be hearing a sweet Geordie-adjacent (I said ADJACENT) accent on these speech bubs.

Sheffield has hidden tunnels! However, that’s because they all house hidden underground rivers, which are, uh, somewhat stagnant. Not the best way to spend a weekend, not that…. not that I’ve ever done that of course. 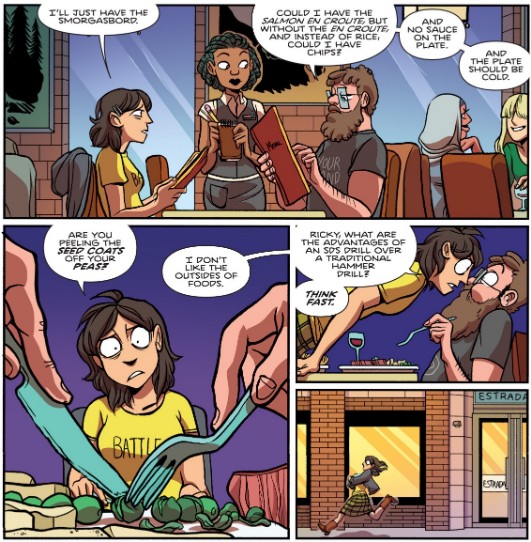 Page 16:
Susan’s second date? Moustache—but it’s hidden within a beard. Is “Your Band” a real band? GO ASK JOHN. There is no SEO value on it as a name, I can tell you that much.

Ricky, in the mould of Meg Ryan in When Harry Met Sally (JA on a Ryan binge? Maybe), is a high-maintenance orderer. “En croute” means in a crust; “without the croute” is just salmon. And chips. Fish and chips! With peas. Very rustic — McGraw is rustic — but not handled in a rustic manner. Can he compete?

Page 17:
A comic about robots that is a subtle read. This is probably half joke at the idea of selling comics as subtle reads being The Way to Approval, but it could also just be, like, any given robot comic, you know? If we’re fair though, James Roberts probably wrote it. I dunno why it was so cheap, though… Must have been a back issue.

Honestly, Ed’s advice here is very useful. It helps to think of the people who are going to buy the cast-offs.

Look at him. He’s bellowing.

As a young feminist, Susan recognises with disdain the many ways in which men perform “no homo.”

Page 19:
Sport Billy is a cartoon made for Germany in 1980. It’s about a boy who likes football, and other sports. Susan, I guess, knows this somehow. She’s a deep dive girl, we can’t deny it. FUN FACT: Frank Welker performed a voice, making “things to do with Transformers” a twofer-feature in this issue (see: page seventeen), vying with opium dens for the lead.

Ingrid whisks Daisy off her feet, in a literal way but not a traditional way., over the back of a chair I guess if you think about it it could be pretty traditional, as “off her feet” is a bit, I don’t want to say disrespectful (tho…), so: irrespective of preparedness.

Page 21:
Euro-pash! It sounds like “Eurotrash,” which is kind of a casual slur but more importantly (I think?) used to be a TV show. About “Europe” being… Well, listen, I watched it once and it had guys in capes doing penis origami. With their own penises. You get me?

Claire, you have never less been a thirteen year old boy left alone in the house one night with full access to late-night Channel 4.

Page 23:
McGraw wears a nothing red (shirt? sweater?) to the club, and carries a pocket screwdriver, and somehow these things make him a catch. It’s really some kind of magic.

The new girlfriend is a threat because not only does she get to kiss him now, but she’s highly dressed and done — she has an aesthetic that takes time and effort, and confidence. Susan is the epitome of “oh yeah??” women’s dressing; she doesn’t keep anything neat, she doesn’t wear make-up on the reg, she dressed like a laundry pile mostly. This can be an expression of confidence too, but it’s not conforming to “how a woman is supposed to be”; being “replaced” by someone who does conform, and conforms well and admirably, could easily set a person off piste.

(Not that Susan would say off piste. She hates skiing.)

That Susan’s attitude towards grooming as a part of her “girlfriend profile” has yet to be delved much into is pretty neat, as Giant Days refuses to make her hoodie nature a weakness instead of a feature. But it’s also something that could provide a lot of character investigation and drama. We all get insecure sometimes, right? Especially as Susan’s lost McGraw to an overt-feminine type twice now.

On the last panel, Esther’s offer to go and fail the Bechdel test translates as “go and talk about boys.” The Bechdel test is “does this story have women in it not talking about men?” There’s plenty to google about it, my babies.

One thought on “The Annotated Giant Days #16: Susan’s Day of Dates”