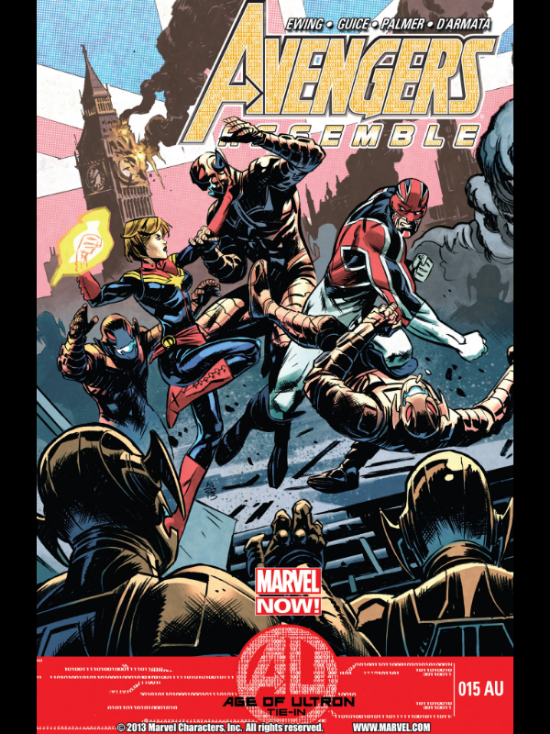 I have a complex relationship with my nationality, as I imagine a lot of Brits of my generation do right now. I’m Scottish on my dad’s side, so my surname is Scottish; I’m Irish on my mum’s side, so my nan insisted my first name be Irish. My dad’s adopted, so biologically, I’m quarter who-knows-what on his side, but above all else, I’m British and I don’t really like Britain. I don’t really think I need to explain why, just look at any newspaper right now to see what’s going on, but there’s always been something about Captain Britain stories that I’ve loved. It’s like how Brooklyn Nine-Nine is essentially a fantasy show where all cops aren’t bastards; Captain Britain stories are are stories where everything I want to be true about Britain is true. Captain Britain gets more powerful the more confidence he has in himself; Captain Britain stories have the same effect on me.

It’s a weird thing that one of my favorite issues of all time is an Age of Ultron crossover set in an alternate time in which Captain Britain dies in the end, but everything about this issue speaks to the things I want to be true about Britain and also some of the things we don’t want to confront. The focus character of this issue is Captain Marvel — you might have heard of her — who was on holiday in the UK when Ultron attacked, taking over the British Isles in about eight minutes. We join the adventure in medias res with Carol rescuing a Hugh Grant type and bringing him back to the British Museum where the surviving British superheroes have made a last stand with the aid of Excalibur.

Excalibur isn’t just the sword, but the codename of the person in the Marvel Universe who wields it; that being Faiza Hussain. Faiza was created by Paul Cornell and Leonard Kirk for the underappreciated Captain Britain and MI:13 series. She’s a British-Pakistani doctor who gets the power to kinda disassemble people and fix what’s wrong with them from a Skrull thingamijig, but she can carry Excalibur because she’s worthy. Faiza represents everything great about Britain; she’s a first generation Brit who dedicated her life to taking care of people who need it via the NHS, itself a representation of everything great about Britain.

I grew up reading British comics, and by British comics I mean The Beano and The Dandy, and occasionally Panini reprints of Scott Lobdell X-Men stuff. I have some American reprints of Judge Dredd stories from when I was a kid, but I’ve never read an issue of 2000AD or Heavy Metal. I know that the new characters introduced in this issue like Computer Graham and Magic Boots Mel are a reference to comics characters from the eighties (Computer Warrior and Billy’s Boots, respectively) but I didn’t know that until after this issue. I also have massive blind spots with British comics history that I’m not particularly proud of, but you don’t need to know any of that to enjoy this issue and even in an alternate-universe story where a bunch of people die, Al Ewing and Butch Guice still end up adding to the overall Marvel Universe, because presumably there are version of Graham and Mel in the timeline where Ultron didn’t take over and kill everyone.

The Black Knight’s story is an important one in this issue and Brian Braddock sums up Dane Whitman’s struggle really nicely when he refers to the Ebony Blade as the “anti-Excalibur” which represents the worst things about Britain – what Brian refers to as “the other Britain.” That’s the problem though, there is no this-Britain and that-Britain and we can’t just sit around celebrating the virtues of our country and history without confronting the absolute worst parts that come with that. Recently in the UK press there’s been a big debate about Winston Churchill as a hero or a villain, and he serves as a great representative of the British Empire as whole. There’s a lot of people that just look at Churchill and see the war general Prime Minister who led the country through it’s darkest hour, and ignore the white supremacy and genocide that comes along with that. Brian would want to put all of that into the category of “the other Britain” along with everyone The Ebony Blade represents, but we can’t have a serious discussion about Britain and its role in the world right now, without talking about its worst aspects.

The sequence where Brian hands the helmet of Captain Britain to Faiza – and doesn’t just tell her he’s making her Captain Britain but tells her why there’s no-one else it can be – always makes me tear up a little bit. As soon as I read this issue for the first time and saw the caption “Dr. Faiza Hussain is Captain Britain” nothing else would ever make as much sense to me as that did in that moment, and every moment in the prime Marvel timeline in which she isn’t Captain Britain just seems wrong. Brian Braddock represented Britain well for the past forty years, but he doesn’t represent it today; not in the ways that Faiza can.

There’s kind of a two-part sequel to this story set during Secret Wars in which this incarnation of Faiza fights a fascist regime which speaks in literal, actual sound bites from then-Prime Minister David Cameron… but the potential of Faiza as Captain Britain has yet to be tapped into outside of three out-of-continuity issues.

The issue ends with a moment of hope, considering Faiza and Dane just witnessed St. Paul’s Cathedral explode with their friends inside. It’s British resilience; what certain pro-Brexit factions might call “The Blitz Spirit”, but this issue hammers home the human cost of that resilience in ways that blitz fetishists conveniently ignore. This story makes me proud to be British, in the same ways that Superman makes me proud to be human. It shows me all the ways we could be great, kind, caring people and reminds me that there are people in the country right now that are like that and are working to make that fantasy a reality. It reminds me that I can be one of those people too.