Joe Quinones shows up as artist! Presumably as an apology from DC for last week’s issue. Harper gets the Bat-Fam together to go rescue those tech-infected children who last showed up literal months ago, breaking into a factory to go confront the most obvious villain reveal of the series to date. It’s a return to form, though, in Batman Eternal #41!

A van driver is foolishly attempting to drive somewhere successfully in Gotham City, even daring to try eating a doughnut and drink some coffee as he goes. His attempt to tempt fate in this way leads to the only natural conclusion: a bunch of kids surround him and give him the full Children of the Corn treatment, vomiting out streams of blue nanobots which form a big tentacle that clubs him deep into the ground. Ew.

Red Robin tracks the van – hopefully later on in time, or else he just watched on as the van driver got murdered – with help from Harper. Her brother has gone missing (this was probably on panel earlier in the series, but obviously we’ve all forgotten and lost track of this plot thread since then) so she’s all-in on trying to track him down and rescue him. She did… something technological to help track down the kids, lord knows what, I struggle to understand anything computer-based once you get past the command prompt. Her conclusion is that the kids are all at this factory together, anyway, so she’s sent Robin over to go shut it down.

On a rooftop, Stephanie Brown is either vlogging or talking to herself. With the current payment system on Youtube, the two are often one and the same. She’s interrupted by some joker – not in that way – who has bolas and tries to catch her using them. They get ready for a fight, but he catches her out by saying he’s been sent to protect her. As she processes that, he smacks her in the face and catches her. I’m guessing this is Catwoman’s hired hand, although I have no idea who he is. There’s every chance Joe Quinones invented him here.

At a separate rooftop, the Bat-Fam have assembled with Harper, and Batgirl is now in her Burnside outfit! Isn’t it crazy to think that era happened and then DC were like “nope, too lucrative, let’s roll all this back”. Red Robin wants her and Red Hood to get into the factory and sort things out non-lethally whilst he finds who is in charge and takes them out. I think I’d probably want to reverse the roles, but you’re the master tactician here Tim, so if you want to send the guy who has to say “lemme grab my rubber bullets” because he specifically never usually uses non-lethal rounds… then fine. Harper wants in on the action but Red Robin specifically forbids it, in the process guaranteeing that it will happen.

Batgirl and Red Robin smash through the skylight and start causing some trouble, whilst Red Hood bursts through the door with two pistols and makes a badass quip about punching up some schoolchildren. Once inside they spot a pylon of some kind, and as anybody with an N64 can tell you, those are the things you have to destroy first. Tim flies off to go get rid of them, whilst Red Hood on-panel shoots up children with non-lethal rounds. If anyone but Joe Quinones were drawing this…

At the top of the factory, Robin finds himself face-to-face with the only villain anyone could have assumed would be the man behind this: and as Robin comes face to face with Jervis Tetch, the rest of the team basically facepalm at how they didn’t guess this earlier. He was responsible for setting up Jim Gordon, and now he’s got a factory full of children… again, I think. He usually gets children to work for him, right? I think it’s a prerequisite for his plans. Harper realises what’s coming next, but gets cut off into static before she can warn the team.

Robin charges at Tetch, only for the Hatter to press a button on a miscoloured Cheshire Cat-inspired device that sets something off in the building. Within seconds, Red Hood is infected by nanobots and joins the cause. Batgirl realises she’ll be next so she tells Robin to leave whilst he still can, and save them later – I like that writing for her – before punching out Jason as quickly as she can. She’s then infected herself, before Robin – who takes a long time to escape – is also brought down and joins the cause.

Harper retreats back to her house to do a quick vlog – kids these days, always trying to keep that content schedule up to date – but basically records an apology for her brother because she’s about to do the thing everybody has been telling her not to do: become a superhero. She gets out the outfit she’s been working on, puts on the mask, and suits up. Ready for action, Harper heads off to go save the day! 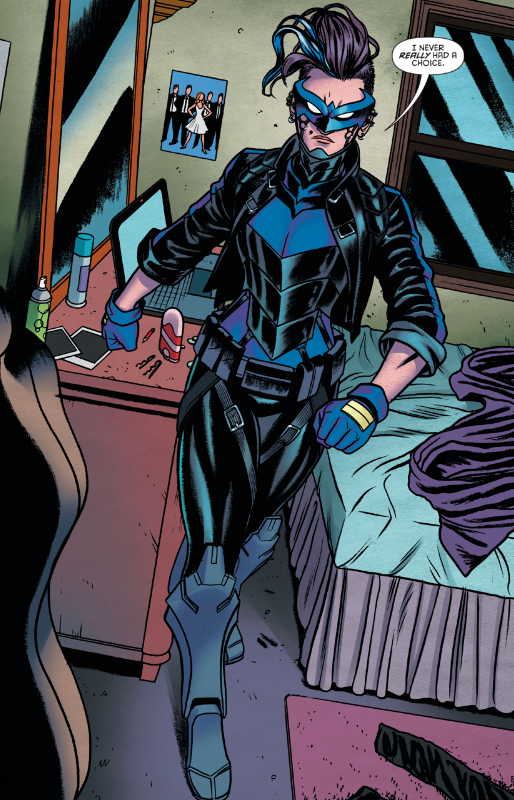