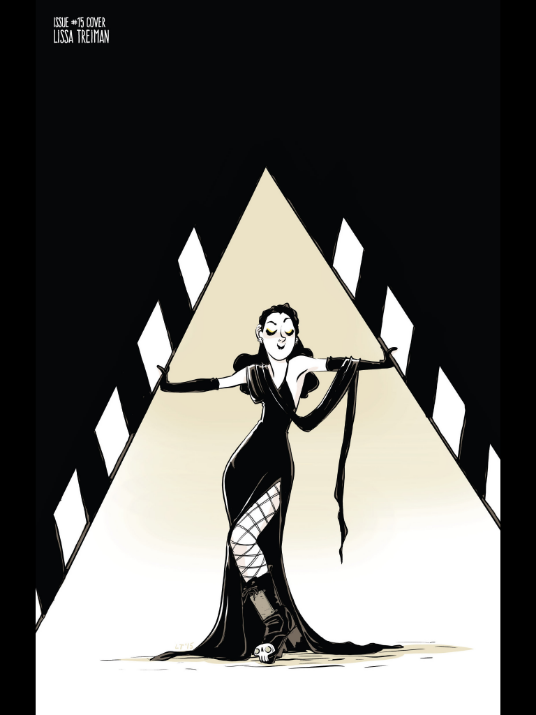 Page 1:
Look at how the buildings bend in. Fright! Terror! Esther runs in red, her hair flies enchantingly, she wields cleavage and heels — so of course she starts to laugh. This is all too typical. A definite pastiche.

Page 2:
Yes! A pastiche. But from the comic, not from the film crew we see on the page. They are quite serious. What does an Asylum movie look like on a film student budget? Try to see it in your mind.

The tennis ball on a stick wielded by a man in green, of course, is a regular enough film-making visual these days. Is that the sort of thing that needs to be annotated? Probably not.

Andy Serkis should have won an Oscar for by now. His is the biggest snub in the history of the business.

Page 3:
You can read these words and turn them into practical imagination, but should you? There’s really no need to bother. Do people sometimes speak this way in b-movies? Yeah.

Esther has a weakness! She’s a bad actress. I’m not sure if she is good-bad or bad-bad. Either way, it’s an endearing relief. Too perfect is too stressful.

Susan calls this boy “this boy”; we are reminded he is merely a rebound fill-in for her lost love, Eustace “the boy” Boyce.

Page 4:
I don’t think people in movies, even b-movies, wear this kind of stuff any more. They absolutely used to, which is why beat-em-up and tournament fighter video game protagonists used to look like that in around 1990. It is a STRONG look? Yes. Should it come back? Absolutely. Boys: pick up those headbands.

Esther raises a vision of film festival laurels above her head. She imagines the film will be good — we know the film will not be good.

In 2019 the Don Valley Film Festival is going to be held April 5th-7th.

Page 5:
Adam has added a jumper over his acting vest whilst directing. Why? It must be cold. Does he offer Esther a warming cover-up? No. Boo.

Do most apocalyptic b-movies really have a sex scene in? By my experience, which is more extensive than it might be, yes they do. 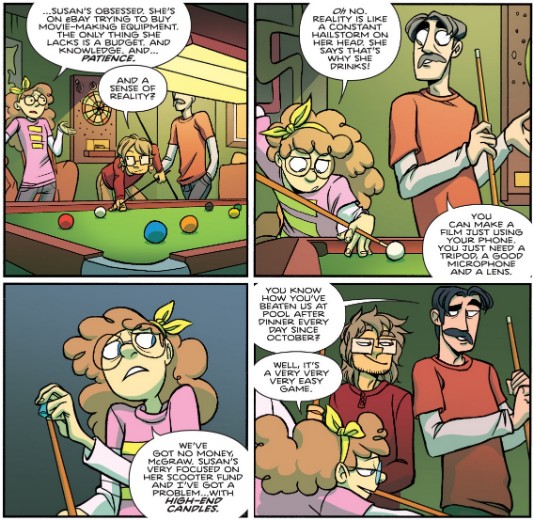 Losing one’s gift if it’s used the wrong way is a pretty classic fairytale consequence. Specifying evil as the ill use is very Christian of Daisy, although she certainly didn’t invent the combination. Pool hustling is a common grift in many police procedurals and crimesploitation movies of the twentieth century, as well as in real life.

Page 8:
Susan is a detective. If she doesn’t grok the unlikeliness of Daisy “finding” these things, it’s because she doesn’t want to.

Variety, the magazine Daisy is reading, is an American entertainment trade magazine. She’s in the movie business now!

Achieving boffo box office is a good thing. The word boffo is only ever used in connection with box offices.

A string of lights is tried & true student room decor.

“I don’t know how to do CGI robots in photoshop”— a ha-ha line based in real world ignorance of digital visual crafts. Daisy is The Common Person on the Street, assuming that anything digital can be “done” in photoshop. For more along these lines, see Clients From Hell.

Honestly I don’t understand the Greta Gerwig reference here. So!

Page 9:
Esther and her ego are not doing so well.

Three cold showers a day is an extreme level of horniness. If Esther gets that boy, she’ll kill him by dehydration. Susan mentions actors’ transference, which is something various professionals discuss in various ways.

“Punching up” a script is nothing to do with “punching up” (as opposed to “punching down”) in, say, comedic cruelty! It just means ”making the script more good.” But punching it up sounds better. You see? It’s a phrase that does the thing it’s describing, to itself! Amazing. That’s Hollywood.

“A fish market at dawn…” sounds like the kind of thing that could easily be nicked from a real movie. I don’t know, which, though. Maybe you do!

Page 11:
“superposed” = “placed on or above something else, especially so that both things coincide.”

“quantum” = “a share or portion” but I think here more used in the “liminal” sense it bears colloquially.

Visible again: the mask from The Mask; the Jason mask from probably one specific Friday the Thirteenth sequel; a poster for The Blob (1958). Movie memorabilia a-go-go.

Esther tries the patented T&A pose “celebrated” by EscherGirls. It’s hard on the bod, but designed for purpose: to arouse.

This boy is drinking coke in the dark in the daytime. He’s not gonna taste too good and his stamina is probably awful.

Page 12:
Esther has been reading TITAN and ACTION Please. I don’t think these are real comics, which is smart, because this is a comic and this boy is supposed to be kind of a dunce. Let’s not insult ourselves.

“Raw rendering power” gives this boy the 2001 Gamer Webcomic face. Esther… he ain’t for you.

Page 13:
A film about making a film! Ed Gemmell has gone Full Kaufman. Very meta. And THAT is how you know it’s INTELLIGENT.

Page 15:
Daisy channels Diane Keaton for her movie star turn, while Esther stays Esther for hers. Susan wears a dress we’ve seen her in before, but if it ain’t broke, a practical person don’t fix it.

It doesn’t seem right to bring popcorn to a film festival. Poor form, Ed, you’re not meant to be enjoying yourself!

Agamemnon Ascendant: Leave the camera on something normal. Also pretty “seen it!”; “a W. Jones joint” makes it clear that this is intended to be individual, which it’s not.

Calling something “a shower of plops” is a very literal description from Susan, but of course she really means “what a great deal of turds,” as in “such nonsense!”

The short film name that has stuck with me for ten+ years is “Society’s Romeo and Juliette.” Not just any R & J — society’s.

Page 17:
This movie has a subtitle even though it’s not a sequel. Pretentious points: 2.

Esther looks tired but is wearing a vampire club gown to drive her large, anonymous car. Esther is called “Dana Vincent”— a useless surname, a forename seen in an extant effects-heavy classic. This whole name is used in VO, not once but twice. Pretentious points: climbing.

They ain’t got no CG tho, o no

Page 18:
A very The Room-like reception.

“Earth is safe, and… I’m pregnant” is the sort of boiling-down of common narrative beats that makes you appreciate the ones that swerve’em. Carrie, as I recall, ends with the protagonist (not Carrie) noticing in sadness that she’s not pregnant, and won’t have a child to keep the memory of her dead boyfriend alive, though the “earth is safe” from Carrie. Pretty good writing in 1974, Stephen King, if apt parody is still making you look rebellious. 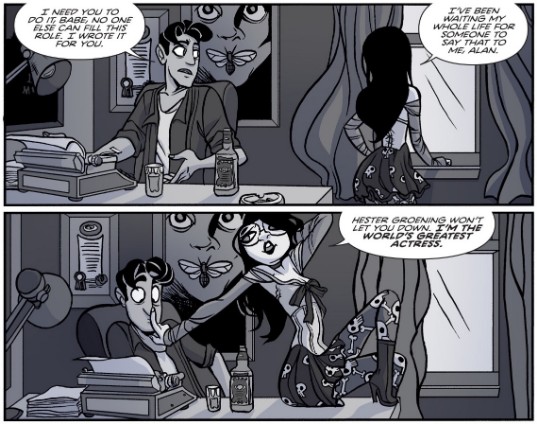 Daisy’s gone all in with the costume, right down to the skull pattern.

r e g r e t. It’s good to see! Even nice girls — even Daisy! — can get carried away being meaner than they meant to. Let us all acknowledge that sometimes, we be bitches.

Page 20:
The purposeful parody of the accidental has an actual robot in! How ironic. If it’s a real Transformer, it’s too new for my expert to identify. Please locate your own.

This boy does the lad-bants-respect lean-over handshake. Because that’s just the kind of guy he is.

Page 21:
“mise en scène”: the arrangement of the scenery, props, etc; the visual set-up of a scene; the object-based scenario.

Celebrating someone for creating commentary accidentally. Is it critically bankrupt or intellectually savvy? You decide!

In the olden days, when movies were done live on stages and computer graphics weren’t invented (they only had puppets, and people dressed in full-body tights!), a wildly appreciative audience would create “applause” for the actors by all clapping their hands, which they held in the air, and added physical manifestations of their appreciation by tossing flowers (to be fanciest, roses) at the stage. This ancient ritual is recreated here, in a metaphoric scene of adulation.

Page 22:
The gang’s all fancied up, but it’s still just a regular night in Sheff. Thus: drunken revellers.

Ed Gemmell is such a good boy!! And he’s a hive of nerves under surveillance capitalism. But aren’t we all, these days.

By “christened” she means “had sex in.” Unless she means an actual flicking of fluids outside of the body, a la holy water in a church… but you know what? I hope she doesn’t.