Time to kill some time, with an issue which doesn’t do much of anything particularly – however it did help this series reach an overall running length of 52 issues, so that’s nice! I guess it probably also got a bunch of people paid. It’s Batman Eternal #40! 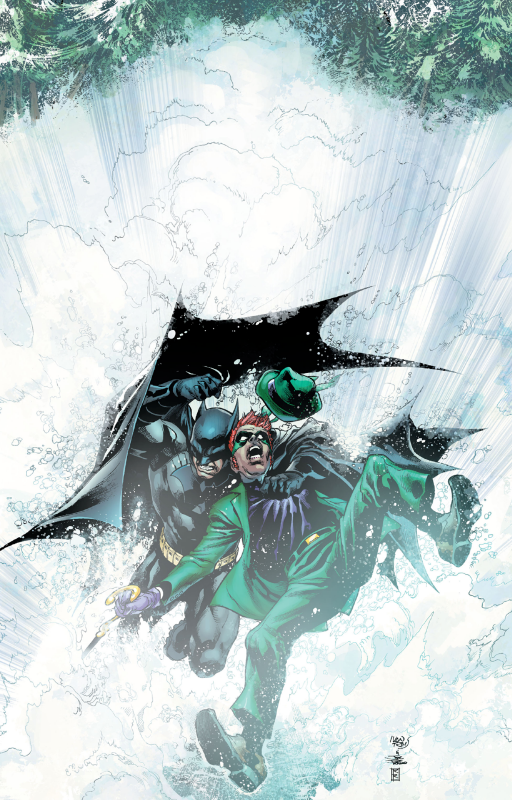 Down at the bottom of Miller Mountain, all is lost – the cabin, Batman, and Riddler. All that remains is Riddler’s cane, which sticks out the snow backwards. Batman’s fine though, of course, and he’s currently busy using his Bat-Torch to light a path up out of the drift he’s completely buried under. Phew! No tension required, that’s a huge relief then.

The villains of Gotham have been handed over all of Batman’s equipment and tech (which of course he’s never reverse engineered or deliberately built failsafes into before, cough, ahem) and are treating it like Christmas. Scarecrow has a range of new toxins to play with, Firefly has some extra explosives, Cluemaster has a new bike… and Clayface seems pretty keen on playing around with a Batman mask he’s just found, so everybody’s happy. Everybody but Catwoman, who throws away a Batarang (carefully) and starts to make a dramatic exit. That doesn’t go so well in a room full of egos who’d all like to be the one who makes the big dramatic exit here, so she suddenly finds a bunch of guns pointed at her. Joker’s Daughter looks a lot like Bugs Bunny here.

She gives them all a word of warning about listening to strange voices before getting in her car. At one point Signalman is like “maybe we should…” and he gets hilariously cut off by Mr Freeze, who is too busy stacking up dollar bills in a canvas bag to pay attention to any of the posturing behind him. “I wouldn’t” he offers as advice. Unfortunately Firefly is a bit of a, sigh, hot head, so he blows up her limo with her apparently still inside it.

Back at the mountain, Batman climbs out the wreckage and activates the heat seeker in his cowl, which helps him track down where Riddler landed. He pulls Riddler out and starts dragging him back to Gotham – presumably the whole way? I don’t know if his plane was affected by the avalanche, but I fully believe Batman could drag a grown man a few hundred miles if he really wanted to – which gets Riddler really panicked. He’s scared about something in Gotham and seriously doesn’t want to go back there anytime soon.

Jason Bard ended last issue by killing the editor of the Gotham Gazette, meaning Vicky Vale is going to get a status quo change at the end of this series. If she survives said shooting spree, that is, as he takes aim after her next, telling her this was obviously how things were going to end. I mean… sure. She maces him in the face because he’s basically completely useless, getting his gun off him and smacking him off round the back of the head with it repeatedly. Then she calls him “Patrick”? I’m confused. Was this meant to be a different guy doing the shooting all along? Who the hell is Patrick?

Over at the avalanche side, Batman and Riddler comedically fall off another mountain for good measure. Riddler tries to take off again – but his escape room takes him over the top of the Batplane, which flies up into the air as he’s stood on the wing. That’ll probably hold him! Pretty good move there, Batman. Riddler keeps telling him off for being mean and harassing him (somewhat fair, although Riddler is at this point one of the greater mass murderers in the DC Universe).

This issue isn’t really getting us anywhere fast, as found out when we return again to the villains as they survey the exploded limo Catwoman was sat in a few moments ago. This time round it’s Signalman’s turn to be genre-savvy, as he notes there’s no body so she’s probably still alive and out there somewhere. He grabs the bags of money and heads off whilst Joker’s Daughter picks up an old-fashion sea mine? Best of luck with it. As the villains all head off, Clayface assumes Batman’s form and wanders off into the city – watched by Catwoman, who is still alive and is standing inside the biggest air vent imaginable. She sneaks to another room where Killer Croc is waiting for her, but sadly without his Pharoah outfit.

They drive off in their replacement limo, which is a badass move. She calls up her head minion (called Eenie…?) and he tells her that the most interesting thing going on in Gotham at the moment is that somebody has put a hit out on a seventeen year old girl – Stephanie. Figuring that you only put a hit on a teenager if she either saw something she shouldn’t have seen OR she’s a Robin, Catwoman decides that her next move is going to involve catching that Spoiler.

At the Gazette, Vicky forces her way onto the ambulance taking her boss to the hospital. There’s a random explosion elsewhere in the city, so the cops leave her be to illegally board the ambulance and head off after that instead. Okay then, great page, well done everybody, you really nailed this page which happened for some reason.

At the sewers, two bodies come hurtling out one of the pipes and land out into Gotham Harbour. It’s Corrigan! He’s still alive, and so is Maxie Zeus, who has his hands back and – thanks to a little magic – is completely purged of Blackfire. That’s one little loose end wrapped up, although I don’t see how Corrigan is going to figure back into the story at this point. As he turns to look across at the city, there are more explosions, so I think he gets up to go help out. Or… arrest Maxie properly. It’s unsure.

Another thing that’s unsure is whether he’s surrounded by a bunch of children with bright blue glowing eyes… or if they’re another thing entirely. Only one thing is for sure: that nanobot storyline is finally coming back, and I have absolutely no recollection of how things were going when we last left it twenty-odd issues ago!