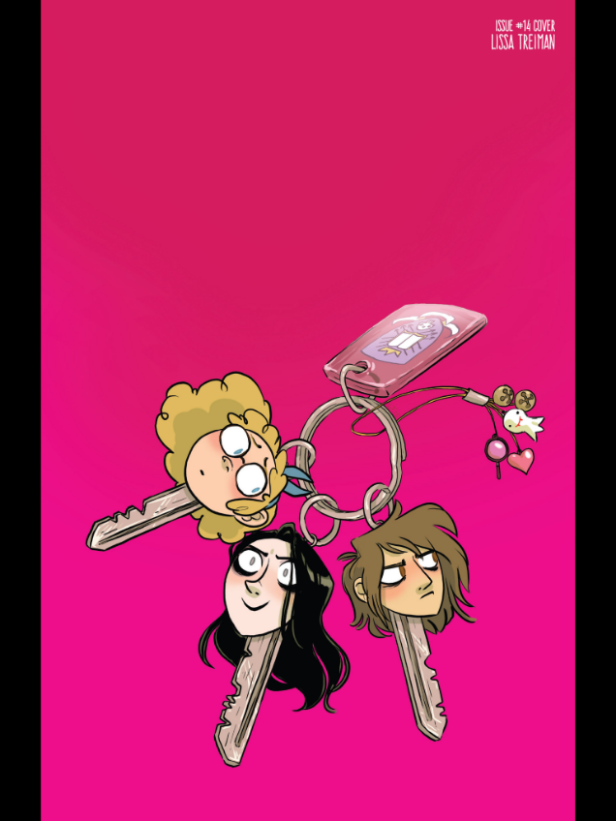 Page 1:
The Korean pilots thing is something that was genuinely reported in 2013 following an Asiana Airlines crash in San Francisco. It sounds fairly racist—why would you place together a pilot and a co-pilot who can’t communicate about piloting?—and was suggested by a white American. Esther repeats it to protect herself and without further evaluation, which is very English of her.

Daisy, too sweet to swear, nevertheless finds outlets for her outrage.

Page 2:
Their student halls kitchen is disgusting, because that’s what student halls kitchens “can be” like. Esther’s reasoning about domestic upkeen is commonly help amongst the student body. Everybody starts with the best of intentions, but by exam season the typical student kitchen looks like it was set designed by the people who work on Netflix’s Daredevil.

You may not know this, but Sheffield is a scary place up North, and you should always travel in groups of five when visiting. Finally Giant Days is exposing the truth!!

Page 3:
Maybe the “smell of death” is coming from your mouldy laptop! Susan!!

Susan is a feminist like Esther, which you can tell from her laptop sticker.

Karl Marx: invented Marxism, basically (a big ol socialist)— not a capitalist, but did use the word “market” as a part of his criticism. In translation, of course.

John Milton: a liberal and a republican, but an English one in the 1660s, so that means he was into democracy.

Milton Keynes: A city that was built that way on purpose, which makes it a little unfathomable for those just passing through. Widely derided as a travesty, which I’m trying to avoid but I don’t much enjoy it either. Quite a car-centric layout, which sounds like it was a good idea but isn’t easy to get used to. This is superfluous information

John Milton Keynes: Esther has let her tongue run away with her and appended “Keynes” to “Milton” automatically

Salma Hayek: To be honest I’m blanking on what this is an eggcorn (or even malapropism—it all depends) for. I apologise.

In summation, Esther is relying on optimism and word salad to assure her friends that they are important enough as people for a house to just be waiting for them, even if they’re unprepared.

Page 4:
This estate agency is highly unrealistic, in that he’s reacting in any way to the house he’s showing the girls round. No estate agent in the UK is actually this engaged.

California Shutters is a UK shutters brand. They have a TrustPilot ⅘ (8.9 out of 10) score. I don’t know if it’s also a type of shutter but they sound quite good, don’t they? I can see why Daisy might like them.

Page 5:
That’s the most suspicious-looking dog I’ve ever seen.

Page 6:
Claire please can I take a moment to stand in awe of that kid’s big red bow tie?

Loose Lips Sink Ships is a World War II rhyme designed to remind the general public that if you know any secrets, or anything about the military at all, you shouldn’t share the knowledge because Hitler could be listening. Loose lips are yours, flapping at your pal on the bus; sunk ships are your husband’s, in the navy, because a spy was sat behind you and heard you say enough for the Nazis to figure out where those ships were. And bomb them.

If one’s tin hat is nailed on, one is very certainly awake to the potential of conspiracy and infiltration.

Page 7:
Spare goths! Both slightly more Lifestyle than Esther; you can tell from the sum total headgear.

Esther keeps her promise to Ed. A strong relationship!

Page 8:
A seed drill is a farming tool. The horse-drawn seed drill, a more mechanical, harder-working contraption than those prior, was invented by Jethro Tull in 1700 (whose name became that of a blues rock band in 1967). Dean Thompson is elaborately calling McGraw “quite old fashioned.”

The Cheeky Monkey does not seem to be one stable cocktail recipe, but an option featuring Creme de Cacao is available here for the curious.

Page 9:
Sylvanian families are a line of toys for young kids, made up of animals in nice clothes who own nice houses and own nice furniture. It is very expensive.

Slightly nicking a Father Ted joke here in panel 2, but I think we can all agree that that’s completely fine, can’t we?

Page 10:
Esther’s point about the social aspects of exercise here is very interesting. Is it a point of freedom, to be able to look gross in public? Does exercise culture offer an escape from physical vanity even as it also turns on that very same pain?

“The brown note” is a special frequency that makes you shit yourself. It’s a theory, not an actual sound people have used in warfare.

Page 11:
Sensimilla is cannabis max strength; Daisy is high because she’s such a rule-obeyer than she’s a drugs void, a body waiting to suck narcotics out of the air by strength of their established absence.

Everybody always enjoys a shake’n’vac reference, because everybody enjoys seeing the shake’n’vac advert on 100 Greatest Adverts every christmas. Let’s enjoy it now.

Page 12:
A cadaver’s grim face and a strict sense of Jesus: that’s what we see in panel one. Very scary. No place for wild girls to live. No place even for Daisy

Holes seem like a good idea. Rabbits and badgers live in holes, and they have a whale of a time.

Susan makes a classic point: some people just take the notion of Christianity a bit too far.

Page 13:
Let’s pretend it’s the far future and nobody knows who Mario is. Super Mario. A little moustachio’d man who starred in a video game. A fondly-held fellow.

Page 14:
Marlon Rando: a random person, given form by the use of a borrowed and adjusted celebrity name “Marlon Brando”

This page looks a lot like Esther’s biggest mistake mark two, but don’t worry— McGraw may be rakishly leaning against a lamppost, and he may be offering her a drink, but he is not offering her the key to his trousers. Thank you, Jesus— you’re there after all.

Page 15:
Horse Hockey: for some reason, it means horseshit, as in, “nonsense.” I tried thinking about why but I didn’t like it much.

Panel four: the legend of the menstrual synch-up. Does it really happen? It seems like boarding school would be a lot of trouble if it did. And why would it? But we keep saying it might.

Esther is so bad. Boys are just there to use!

Puff Adder: either a venomous snake, or a harmless one. Dean probably means the former

You know things are desperate when Esther’s excited about the idea of a 9am start. 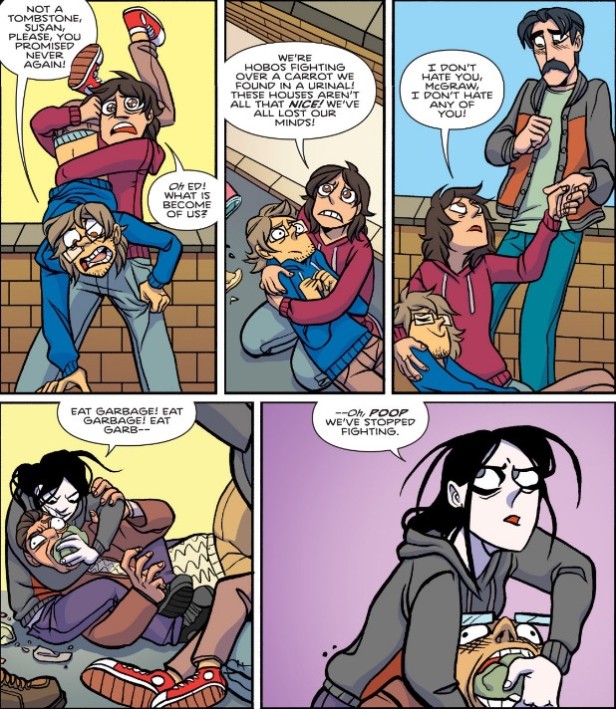 Page 19:
Dean hitting Esther in the face with a banana feels like the moment he truly crossed the line. How dare he?

Page 20:
The Tombstone is the favoured finisher of WWE’s The Undertaker. It is just a regular enough belly to belly piledriver, but done by an enormous muscular goth. Or, here, by Susan.

Ed enjoys being cradled; McGraw is anxious about his first hand-touch with post-break-up Susan. Boys can be so nice

Page 21:
Is it passe to say “cooker” when you mean “oven”? I feel like it must be, because reading it here makes me feel warm and childlike.

Esther discovers a BEAUTIFUL BOY who has a PUFFY FRONT OF HAIR and COLLECTS MASKS. Sanger danger, sweet lonely baby…

I’m glad that this boy is wearing a glove to protect his hand muscles. Jamie McKelvie would approve!

Featured on the wall:

Page 22:
That person with the green glasses seems like Max Sarin is referencing something. Usually when she does this its a reference to Steven Universe. Could that be the case here too, I wonder.

Ed Gemmel’s easiness to girls, Susan’s enduring sensual fascination with McGraw and Esther’s dreams of stardom all tell us where things could go next. Isn’t it exciting?

One thought on “The Annotated Giant Days #14: House Hunting”