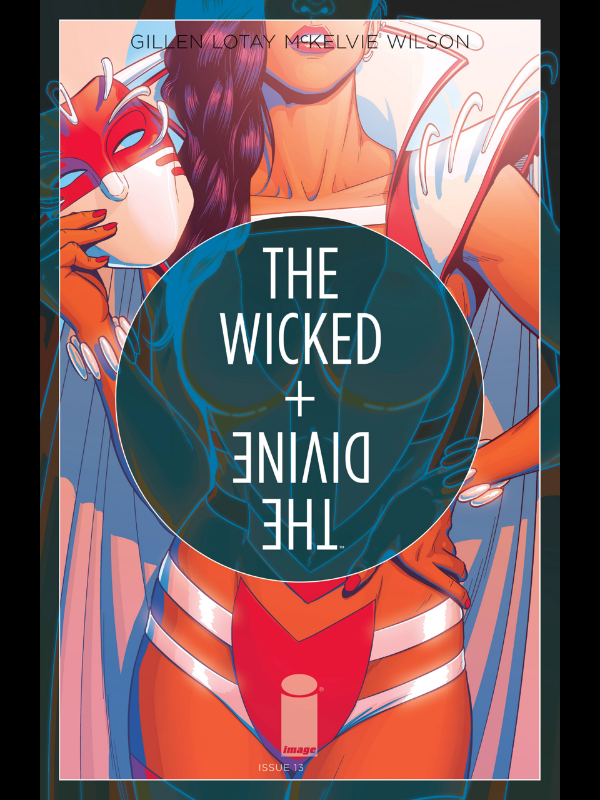 Commercial Suicide is a truly gut-wrenching and unforgettable piece of art, drawing the reader in slowly until the inevitable conclusion and teaching them something about themselves along the way. It deserves its spot in the top thirty single issues for many reasons: the beautiful artwork, the relevance of the issues raised… for the colouring alone. It wasn’t for these reasons this issue has stuck with me my entire adult life however: it was the way Commercial Suicide seemed to tell my story, and what seeing my own voice reflected back at me through its pages meant for me.

The Wicked + The Divine series tells the story of 12 young people who are bestowed with God-like abilities – they inspire the next generation for ninety years, with the catch that they will only live for two years before they die. This generation’s Pantheron are popstars, creating music and art with their gifts and reflecting the culture of modern times.

This issue, drawn by guest artist Tula Lotay, introduces us to the beautiful and mysterious Tara – the only God who seems to be truly aware of the dark nature of fame and fortune. The issue narrates her thought process as though she herself is telling us her story, slowly endearing us to her until the issue reveals its tragic twist, we were reading her suicide note before the moment of her death.

When Commercial Suicide was released, I was eighteen years old and about to leave a small rural town. Not exactly similar circumstances to a beautiful and famous deity/popstar, and yet, Tara’s story mirrored my own in ways that broke my heart and meant everything to me at once. Some of her experiences, like being cat-called on the streets in her school uniform, were things I had directly experienced and internalised.

Others, like the constant online abuse many women in the spotlight are subjected to daily, felt like they should have been completely foreign to me. But as a girl in a town where everyone knew your name, I felt I could in some way understand. I had been called a “prude” and a “slut”; “too uptight”; a “bitch”; “full of” myself; and a “slag.” These words cut deeply, whether said to my face or whispered behind my back, and they destroyed my confidence. I wanted to be liked and I believed that all that was valued of me was my sexual availability. I carried a lot of pain and hurt, afraid to be vulnerable with anyone, and I didn’t know where to turn to.

Tara’s story meant everything to that eighteen-year-old girl, who’d been through a traumatic experience and felt like she was alone in the world. People saw one version of Tara, but they had no idea of her true story or who she really was beneath the mask. Gillen gave us a character who was desperate to forge her own path despite the consequences, who craved authentic connections, and who needed just one person to see her for who she really was. When that failed, she hid behind a persona to protect herself. Only the reader gets to see the true Tara: her pain, her vulnerability and her defiance. Only by this time it is too late, and we have all already judged and mocked her.

In that way, we were all complicit, reducing the character to a hashtag before we had even met her. The truly shocking element of The Wicked + The Divine is the way it taught us that none of us are immune to cruelty. This was our first time to meet Tara herself, but we had heard other characters sneer at and deride her previously.

A catchphrase was all that was needed to draw the reader in, and #FuckingTara cropped up on online discussion boards and fan blogs. Gillen held a mirror up to the reader so we had become a part of her story, vilifying her without ever so much as having laid eyes on her – and in doing so became a part of the problem we all despised. A double-page spread in this issue is dedicated solely to her Twitter mentions, line after line of obscenely graphic, violent and sexual messages. For a fantasy novel, they feel horrifyingly real, and this tool was some of the most effective and original story-telling of the entire series.

Tara’s final message has stayed with me for years, and I genuinely believe it’s made me a better person: “Try to be kinder. You have no idea what people are going through. Yours, Fucking Tara. X” This is a message to us the reader, one that hit-home for me, and I felt in that moment like both an enabler of abuse and a victim.

Her final moments are truly poignant, tears streaming down her face as she sings one final song. This is some of the most striking artwork in the series: Lotay masters her final expressions with two pages dedicated solely to conveying her emotion. The slow build to her death ends so sharply it’s jarring, a sense of shock hits us despite knowing what was coming all along. The final two pages then show us Twitter reacting to her death and Gillen nails the tone here as the final page shows message after message, the overwhelming power and fury of an online mob. This is fantasy grounded in everyday horror, the reader aware of their own destructive power.

Tara had so much to give the world and had a message worth hearing… that no one wanted to listen to. Her suicide note is destroyed moments after her death so her legacy is left with you, the reader, to continue and honour. I had seen what felt like my own words reflected back at me for one moment, only to see them erased and forgotten. With Commercial Suicide more than any other comic, I felt that Tara had told her story for me, and all those women like me. We all know a Tara, even if we don’t realise it. These women can be beautiful, talented, defiant and still not enough for a society that holds them to impossible standards.

I had already adored The Wicked + The Divine for its compelling and masterful story-telling, its beautiful artwork, and its representation of women like me. Commercial Suicide does all of these things at their best, each component working together to leave the reader with a message that is impossible to ignore. Be kinder, have empathy, because life is so much harder than we give it credit for. I remember and honour Tara for her courage, I grieve for the girls like her that we’ve failed, and I thank her for helping me to be kinder to myself.

This piece possibly represents Muireann’s first piece of published comics writing! There’s no doubt that there will be many more in years to come. You can find her on Twitter here!

One thought on “The Wicked and The Divine #13: Seeing My Story Retold”